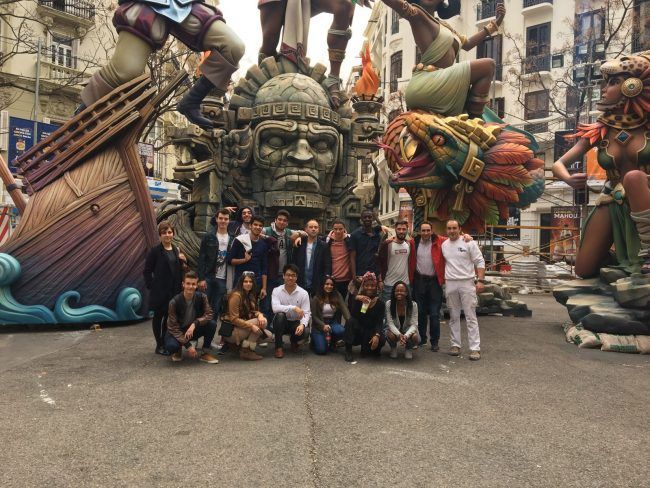 Architecture professor Pedro Verdejo reports on this activity for our international students, in the days before the Fallas holiday:

On March 14th, just one day before the start of the Fallas holiday, the international students from the First Year of Architecture visited the assembly process -from the inside- of the Fallas at Almirante Cadarso-Conde Altea, and Joaquín Costa streets. Falla artist Luís Pascual, from the Manolo Algarra team, guided us and explained all the details through our visit.

This activity had the goal of helping the international student get a glimpse of the cultural richness at the place they are studying now, and understand, from first-hand experience, the traditions in our culture, which of course includes the Fallas. Also, although we aimed at approaching the historical architecture in Valencia, we took advantage of the opportunity and we visited Ruzafa, one of the most emblematic neighborhoods in Valencia. We even visited one of the architecture offices in the area.

We started at the Colomina Palace, which is an institutional building of the CEU Cardenal Herrera University. From there, we proceeded to visit buildings which constitute an important part in the History of the city of Valencia, and that nowadays, after substantial remodeling that took place for either their preservation or their change of use, continue being clear examples of the cultural richness in Valencia.

In chronological order, we visited the San Juan del Hospital church (13th century), acknowledged as one of the first church buildings in Valencia, combining Romanesque, Gothic, and Baroque styles. The Almudín (14th century), ancient barn for the city, nowadays its use has changed to arts exhibition room. The Baños del Almirante (14th century) is a Mudejar building which keeps its original structure and configuration almost intact. The San Nicolás church (15th century) stands out for its spectacular baroque paintings filling the full extent of its vaults, and popularly known as the “Valencian Sistine Chapel” since the restoration that took place in 2016. The patio and golden room of the Palacio de la Generalidad Valenciana (15th century), and finally, the Lonja de la Seda (15th century), clear example of the Valencian civil Gothic architecture, and listed by UNESCO as World Heritage Site.

After this view comprising the centuries of greatest splendor in Valencian architecture, we visited the assembly process of two Fallas, a couple of days before their deadline. The students could appreciate the complexity of the structures employed to hold the figures, as well as the quality of the modeling and painting, explained by one of their creators. They also showed great interest in the techniques used during design and assembly, as well as their shock for knowing that such a high quality and elaborate work is fully ephemeral.

At the end of the day, we visited the Ruzafa neighborhood, with the possibility of accessing the architecture office from abalosllopis architects, where we could see, first-hand, the daily work of the architect in a contemporary office