The collection of European internships for Architecture and Design (BEPAD) promotes the professional practice of students in internationally prestigious studios all around Europe. 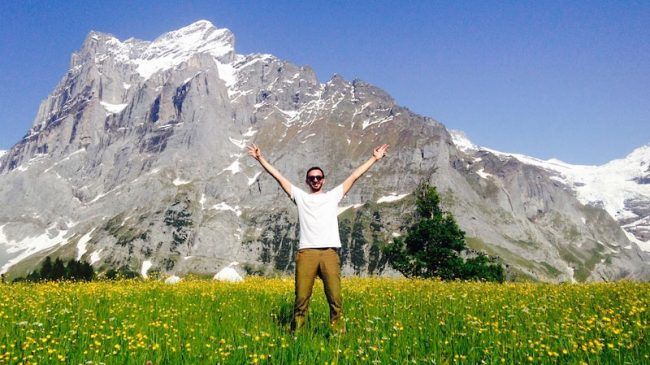 The BEPAD scholarship program allows CEU students studying Architecture and Design in to take part in professional internships at studios in different European countries. In this, the second year of the BEPAD program; the following European studios took part: Cruz and Ortiz architects in Amsterdam; Magnus Long Design Studio in London; McCullough Mulvin Architects in Dublin; Aires Mateus Architects in Lisbon; and Müller Sigrist Architekten AG in Zurich. It is in the last studio that CEU Architecture student Arturo Morera Cuenca did a 6 month long internship.

Surrounded by 35 young architects from different nationalities, Arturo Morera talks about his time at Müller Sigrist Architekten. “I have learned how to better express my ideas and contrast different points of view as well as how to cope well in a professional environment”. In this text, he gives us a first-hand account of his “enriching professional and personal experience” in Switzerland, thanks to the BEPAD scholarship.

“I chose Switzerland because I had heard good things about the country and in particular Zurich itself. There were references to the architectural boom in the working conditions of the architects as well as how much they are valued. It is always difficult to leave your family and friends behind but I decided to take the plunge and try a new experience, get a deeper understanding of Swiss architecture, a new culture and have the possibility to show my ability of tackling a new challenge.

When I arrived, my first worry was accommodation. In Zurich it is very complicated. People say that it is more difficult to find accommodation than it is to find a job… After a never-ending month looking and many interviews, I found somewhere! Challenge complete.

I was full of all the usual first day nerves on the way to the Müller Sigrist Architekten office. I was nervous about the language, German, which until then was unknown to me, meeting new colleagues of many different nationalities, new job structure and never ending novelties to which there was the added pressure of always trying to get the most out of the opportunity. On my way there, I tried to calm my nerves and convince myself that everything was going to be ok. They introduced me to my colleagues and showed me around the office and the general running of everything and then gave me a few basic lessons on how to familiarise myself with Vectorworks (the program that we use to draw) and of course everything was in German so it was a bit of a challenge.

Every Monday lunch time (Swiss timetable haha!), the bosses give a summary on what happened the week before and the tasks for the coming week, it is a way of involving everyone in everything and every one of the projects. After being introduced to everyone and all the first conversations it caught my attention that the average age was not much over 30. It is surprising that in such a well-known Swiss studio, with about 35 employees, they are all so young.

After a couple of days of settling in, as much with my colleagues as with the new computer programs, I was put in the competition team. At that time they were working on a competition in a town in the French part of Switzerland which we had been invited to take part in. There were four of us in the team; no one was from the same country, allowing us to interchange our ideas and visions of architecture. This diversity, without a doubt, enriched the experience. We had the opportunity to go and visit the town as well as publically present our project. And…we won the competition!

After that competition, I took part in another two in the city of Zurich. It was a great experience: the process of coming up with an idea and sketching it out to developing models, the details, the structure, the budget, meetings with engineers and landscape architects… The competition entries are all anonymous which brings a level of transparency to the competition. I have learned how to better express my ideas and contrast different points of view I think that is how I have managed to cope better in the professional environment.

The last project that I collaborated on was a real is a real project, which is scheduled for construction in 2017, because of that the plans are in an advanced phase: execution plans, constructive details, meetings with clients…

In general, this experience has been unbeatable because I have been able to work on projects and competitions that are all very different. I am very happy with everything that I have done, how nicely I have been treated, the decisions that they let me make and the amazing working environment that there is in the office. There have been many suggestions on how to improve the atmosphere in the office. Once a month they tell us about the projects and competitions being carried out in the office, they put on ski trips or hiking trips, they organise meals or barbecues after work as well as participating in the “architect’s football tournament”.

I have to say thank you to the University CEU Cardenal Herrera for this opportunity and in particular my PFC tutor, Ricardo Merí, for his dedication and interest in helping me to participate in this enriching adventure both on a personal and professional level.”

Working at Foster and Partners