In many of our cities it is easy to find avant-garde works created by Spanish and international architects. Each of them is so different: large, small, celebrated and unknown but the entirety of those works has placed us as a reference country in modern architecture. 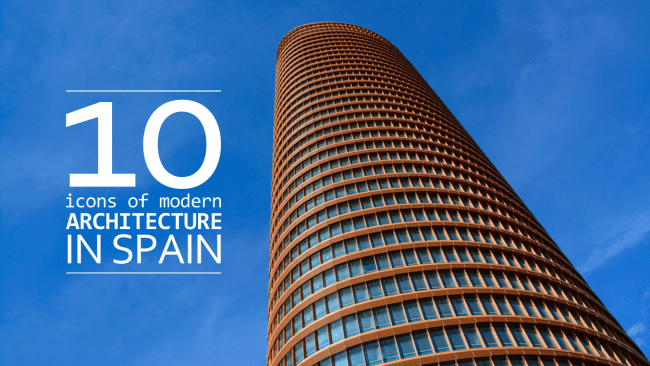 We invite you to discover 10 remarkable buildings that have made Spain a centre of architectural design and innovation:

This 144-meter-high skyscraper designed by architects Jean Nouvel and Fermín Vázquez has forever changed Barcelona’s skyline since its completion in 2005. Its rounded profile reminds of Gaudi’s architecture and even competes with the Sagrada Familia for first place in the run for icon of the city. Although there have been many controversial debates on this building since the beginning of its construction, it has already become a symbol of contemporary architecture in Barcelona for its shape, structure and innovative night lighting.

The Glòries Tower is located in the centre of the district 22@, an emerging area in design and avant-garde buildings in the Catalan capital. In addition, a few meters away there are other interesting buildings such as the Design Museum of Barcelona or the headquarters of companies like Yahoo or eBay. All of them have turned the area into a real hub for modern architecture.

It is probably one of the Spanish wineries with the most impressive architecture. Moreover, this iconic building was designed by Santiago Calatrava. Its wooden slat facade supports a spectacular undulating roof that is inspired by traditional wine barrels and integrated into the mountainous surroundings of Laguardia.

Other star architects such as Zaha Hadid, Frank Gehry and Ricardo Bofill have followed the path of Calatrava to create the headquarters of important Spanish wineries. A trend that has filled our territory with seamless, out-of-the-box pieces of architecture.

Gateway for more than 50 million passengers every year, Madrid airport experienced a huge increase in its operating capacity with the opening of its Terminal 4.

This massive construction signed by the architects Richard Rogers and Antonio Lamela consists of a main building and a satellite linked by an automatic shuttle. In total, more than 700,000 square meters of surface and 64 airbridges make the T4 one of the largest buildings in Europe.

The wavy bamboo roof and its gradation of brightly colored beams flood the interior with light. This unusual design turns such an impersonal space like an airport into a cozy and bright place.

In 2006 the T4 of Barajas received the RIBA European Award. Moreover, its architect Richard Rogers got the Pritzker Award in 2007.

What most attracts the attention of visitors to this museum is for sure its facade, composed of more than 3000 stained glass windows of different colors. A facade inspired by one of the most famous windows of the cathedral of Leon. However, this museum designed by Luis M. Mansilla and Emilio Tuñón also stands out for its peculiar plant built with white concrete. The material helps create a space that meets the needs of the MUSAC permanent collection.

City of Arts and Sciences (Valencia)

Undoubtedly, this huge cultural complex has become the best known symbol of Valencia. This succession of futuristic white buildings designed by Santiago Calatrava and Félix Candela dots the final part of the Turia River. Nowadays, framed by sheets of water and gardens, the City of Arts and Sciences is an authentic cultural hub for sporting events, concerts and all kinds of cultural activities. In addition, it is a point of attraction for tourists interested in its avant-garde structures.

The construction of the complex continues with the incorporation of new multifunctional spaces; the last one, located in the so-called Àgora, will host the CaixaForum Valencia in 2020.

The Canadian Frank O. Gehry won the competition for the design of the new satellite headquarters of the Guggenheim Foundation to other great architects such as Arata Isozaki and Coop Himmelblau. The building resembles a whale thanks to its remarkable facade of titanium.

With his building Gehry managed to place Bilbao on the map of the contemporary world art. Moreover, along with him other architects such as Foster or Calatrava have placed it in the spotlight of the most innovative architecture.

One of the legacies of the 2008 International Exhibition and one of the few buildings signed by Zaha Hadid in Spain. This construction meets two important requirements. To begin with, it is a new bridge over the river Ebro. In addition, it creates a public space where exhibitions can be hosted. Spectacular in its conception and almost liquid in its form, the building is already part of the profile of the city of Zaragoza.

Its creator the Iraqi Zaha Hadid was the first woman to ever win the Pritzker Award.

Although it is not a contemporary building, the Sagrada Familia deserves a place among the most outstanding buildings of our country for three reasons. First of them is that it is the masterpiece of architect Antoni Gaudí. Secondly, for being one of the most important works of Catalan modernism. Last but not least, 135 years after the beginning of its construction, the church it is still not finished.

Known as the “last great cathedral in Europe” (although it is not a proper cathedral), the unfinished work of Gaudí will not be completed until the year 2026. Apart from having a very particular geometry and structure, it is really interesting to follow up the progress of the works in real time through its web, blog and social networks.

The Sagrada Familia, as well as several other modernist buildings in Barcelona, ​​is included in the list of UNESCO World Heritage.

In the early 2000s Jean Nouvel got a difficult task: he was entrusted with the expansion of the Reina Sofía National Museum for Modern Art. In addition to the need to expand the space of the museum, the project demanded that the MNCARS would be converted into a building equally attractive to the other two major institutions of the cultural axis of the Prado: the Prado Museum and the Thyssen-Bornemisza Museum.

For the MNCARS, Nouvel added a new building and created an interior plaza under a spectacular 30-meter-high roof with cantilevers. Elements such as the new exhibition space, a service area and two auditoriums dressed in a striking red cover have helped turn the Madrid museum into a cultural reference in Europe.

It is always difficult to build something new in the very traditional city of  Sevilla. Get ready for controversial discussions especially if the building is projected in the historical centre of the city. However, the project of Jürgen Mayer H. Architects has managed to overcome the controversy to become a symbol of the new Seville. With a spectacular wooden structure with upper terraces and lower public spaces, the mushrooms have turned this square into an absolutely unique urban space.

Spain has created its own brand in the world of architecture. On this trip, we have invited you to discover a world of different buildings, all unique and with its very personal features.

The next step is to visit them and learn from them: From the essence of their creators and the environment in which they are located. It is a trip that every Architecture student of CEU Valencia is invited to every year.

Because studying Architecture with us means traveling. Traveling to discover. To discover architectural works in their context. Also, to discover the essence of each building. Both in Spain and in the world.

Because traveling at our University is a compulsory subject.

Will you be joining us in our next trip?

BIM & CAD or the projects management in architecture