Simon is French and he has never lived in France. He was born in Seoul, South Korea and spent his childhood there. After that, his family moved to Poland, then to Czech Republic… Right now, he is studying Architecture with us here in Valencia. “It’s only the beginning”, smiles Simon when we ask him if he will continue moving across the globe. It looks like country borders don’t exist to this ambitious guy.

Contrarily, he wants to explore as much as he can and is open to every opportunity: “I grew up with this mentality. If you have no potential, create it.”

Was young Simon always dreaming about becoming an architect?

Actually, not at all… At first, I wanted to be a lawyer. I even did my high school internship at a law firm in Prague. It has nothing to do with Architecture, right? In fact, I liked it a lot there but somehow I started thinking, “Will being a lawyer bring me happiness? Will I still be passionate about my job after 20 years?” and the answer was a bold no. I felt very confused at the time and didn’t really know which path to follow…

Everything changed during a trip to Dresden with my parents. We went to Grünes Gewölbe and my mother asked me all of a sudden if I wanted to study design.

“You can’t build a good house in Russia and in the south of Spain using the same materials. Architects need to be as much adaptive as possible”

To be honest, I have always been interested in drawing, in creating my own style. At some point I started looking for information on how to design video games, as a hobby of course. But then one day this idea crossed my mind: “What about Architecture?“. I realized that by doing this I could be creative and earn money at the same time. Shortly after I started an internship at SUDarchitects in Warsaw and I loved it.

As you can see I have tried many different things until I found out that Architecture was what I really wanted to do.

And at what point did you decide that Valencia was the place to become an architect?

Well, I found out about it from my sister who is studying Physiotherapy here at CEU UCH. I also considered Florence and Barcelona, but I finally chose Valencia. I think it is smaller, somehow cozier… Valencia is a very calm and friendly place to live. Back then I was living in Prague, which is a capital city and I felt like needed something more relaxed. Plus here you have the sun and the beach!

It has to be the Silk Exchange or Lonja de la Seda. Once I got inside, I was blown away by its special atmosphere. But what I like most about this building is that it’s powerful, solemn and light-hearted at the same time.

Does it mean that you like combining different styles?

Exactly! I really like mixing old and new. I’m very interested in ancient architecture such as ancient Egypt or Greece. At the same time, I really like the more contemporary style: A very modern, clean and pure style. For example, if I see a clean, white and empty design I say “this is my temple“.

Above all, my ideal style would be a blend of old, modern and minimalist architecture.

What materials you prefer to use while creating projects?

I’m always trying to adapt. I think there isn’t just one material for all the cases. You can’t build a good house in Russia and South of Spain using the same materials. That’s why I’m adaptive architect.

You have lived in different cities and continents so you must be familiar with several architectural styles. Which of the cities you have lived in would you choose as your favourite?

Prague, without a doubt. Seoul is too crowded, there isn’t a lot of aesthetics. It was built in order to provide housing for people. Warsaw was unfortunately destroyed during World War II so there isn’t much historical architecture left. On the other hand, Prague has been mostly preserved. There’s a lot of history, there are many impressive buildings.

In Prague you can actually feel the history in the walls. Some time ago I watched this movie called Anthropoid about the murder of a commander called Heydrich during WWII. I have been to the church where some of the characters were killed. But this happened for real and you can see the marks of the bullets on the wall. It is just a spine-chilling feeling.

“I GREW UP with this mentality. If you don’t have potential, create it.”

What do you think are the main challenges that people of your profession face?

Being original and efficient at the same time. I want to become a famous architect, but I also want to be helpful. For instance, when you go to a hospital, the atmosphere there is always very depressing. Why not create something meaningful? As architects, we can help patients creating nice and cozy spaces for them. It is just a matter of adding some details. 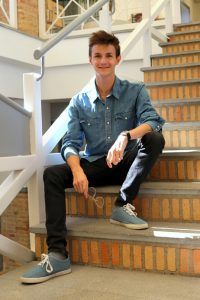 What is a good architect for you?

Original, efficient and ecological. Speaking about the green architecture I think nowadays it’s becoming more and more important. However, most of the time people are still choosing quantity and low price. That’s why it’s crucial to find a solution to eco-friendly and low-cost housing.

So what’s your next stop?

Right now my plan is to find an internship and finish my studies in the United States because I want to start my career there. I have no idea where I’m going to be in ten years but I’m sure I will be exploring new places and doing what I love. The most important thing is to not be afraid of taking risks. I’ve learnt it from my parents. If you don’t have potential, create it.

You were interested in my personality and my story so perhaps other students will be, too!