What does an architect do? Beyond designing buildings and structures, architects design solutions and spaces that meet the criteria concerning functionality and aesthetics. It’s something that we do in our Technical School of Design, Architecture and Engineering… but in a different way. That’s because we believe that in order to be an architect, you have to work with a sense of creativity, curiosity and common sense. And to achieve this, papers and exams are only a small part.

If this is what you like doing, Architecture is for you. That’s what our international student Elias told us: 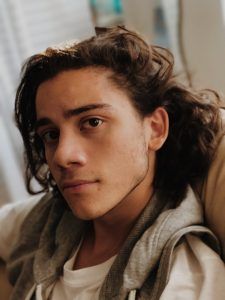 “My name is Elias Albag and I’m 20 years old. I’m currently studying the Architecture degree on University CEU Cardenal Herrera in Valencia. I’m from the northern part of Sweden and have throughout my life always been interested in drawing and sketching. Most recent years buildings and artwork started to fascinate me and suddenly one day I decided to dig deeper into my interests and apply for a University in Spain. Even though I love living in the northern part of Sweden I’ve always known that I had to get out in the world, to explore, experience and most important, chase my passion.

During my high school years my favourite subjects was drawing and wood work, it was because I was kind of handy and creative, but also because the thought of making artwork and models by myself. The mind-set of studying Architecture didn’t really struck me until my 19s because I didn’t really know exactly what I wanted to become. The first time I really thought about it was when I was browsing online and this website popped up; It said it would help give someone options of what he/she would like to study so I decided to give it a go. After filling in all the forms I got the results, it included jobs (if I remember right) with creativity such as carpenter, engineer but most important, it said Architect.

After applying for CEU Valencia I´ve realized that it is so much more of a lifestyle than I thought it was. I’ve only studied for 1 ½ semester, but during this short of time I’ve learnt so many new things and now I see the world through another point of view. My passion to become an architect have grown and is still increasing ever since I started the program. I know I still have a lot to learn, but I´m very excited to explore further and, maybe one day, make a change in this world.

My dream when I first became a student of architecture was to build my own house, but eventually I’ve realized that the job is far more than building houses. I am still aiming at designing my own house but also other goals have come to me along the way; Such as be a part that builds a better future, better society for people to live in.”