The COACV prizes are already on display.

In the category of final degree projects, the winner is our student José Luis Moreno Delgado with his project Residencia de artistas. 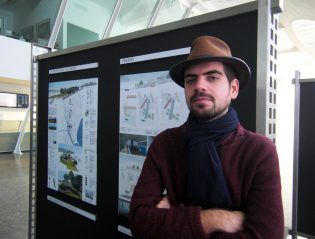 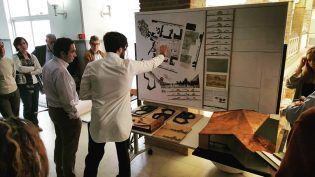 We have asked some questions that we thought were interesting.

1-How does it feel to get a Final Degree Project prize?

–José Luis: I could not believe it, that same morning I had been awarded the Arquia Grant. It was a joy and recognition of the persistence and hard work developed in the school.

Behind these awards we also faced failures, the important thing is to continue persevering and not giving up.

–Ernesto: First of all satisfaction. It is comforting to feel that your work and effort for so long has been worthwhile and the court has recognized it.

2-What topics were you thinking about for the FDP? Why did you decide on this?

–José Luis: The theme developed in the FDP is from an Artist Residence in Santa Eulalia del Rio, Ibiza, which is my homeland.

The idea of ​​the project started from a conversation I had there with local entities about the current exhaustion of the common sun and beach tourism, and the search for new tourism models for the island.

I thought it could be an interesting, suggestive and attractive starting point. 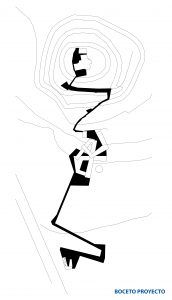 –Ernesto: I belonged to the last degree promotion, so in the Final Degree Project  it was given the choice between two subjects: a cooking school or a special education center. I opted for the special education center, from my point of view it is a more interesting program, with many more factors to consider, for people with needs that we are not used to and therefore spaces to which neither are we, that’s what caught my attention on this issue. 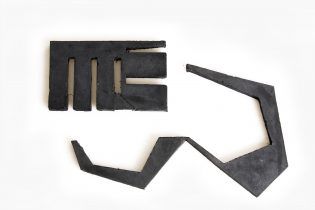 3-How has the process from beginning to end of the FDP been?

–José Luis: It was not easy, not to say it was very complicated. It was a process full of moments of crisis, dead spots and all kinds of difficulties related from the choice of the plot to the structure, I thank my tutors Guillermo Mocholí, Enrique Fernández-Vivancos and Alfonso Díaz for helping me and guiding me.

The design process was highly complex both because of the location, on the border between the urban and the rural, and because of the characteristics of the proposal.

From the beginning it was clear to me that a proposal of this type was very difficult to understand and design in plan. That’s why I decided to work on large scale models: surroundings, facades, plants, structure, pavements, gardens …

The corrections were always made with these models both with the tutors and with the court. When all the parties were in agreement with the design of the project, I photographed the models and, from these, I modeled the project in Revit. Thanks to this method I was able to devote more time to the design than to the delineation of plans.

On the other hand, as a recommendation, in order to deliver and generate the amount of work that has a FDP in its final stages, the best thing is the organization and to establish a schedule where it is as important to work as to rest.

–Ernesto: Beginnings are always difficult. Many things to learn and starting from scratch are tasks that always require a lot of time without producing efficient material, but which are obviously necessary to build a solid foundation of the project. Once you have ordered and processed the information, you start slowly until you find the guidelines on which the work is going to be based and, from that moment on, you really begin with what will be the end of the project. When you get to that point, I think that in the case of architecture, you immerse yourself in the project and start working on it until you’re practically in the presentation day. 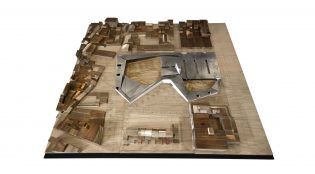 4-Sensations when you see the end of the student stage

–José Luis: They are ambiguous, on the one hand after so much effort you want to finish already, but on the other it gives you pity to finish a stage of life as rich and stimulating as it is the career of Architecture.

Not to mention the vertigo that suddenly appears in the labor market.

After almost two years of having finished you have good memories, good experiences, everything you learned and that was just the beginning of something wonderful that is being an Architect.

–Ernesto: Here the phrase “when you start working you will miss the university” becomes a reality. As everything has its advantages and disadvantages, but the feeling is good, you leave behind a very good time and many memories that sometimes you would like to return, but moving forward is also good and that is the second stage, the professional. Also, I am currently working on a doctorate, so I have not been able to disassociate myself from the university.

5-What do you want to stay with at the university?

–José Luis: With what I am left with the values ​​of sacrifice, commitment and work, I will not forget the years in school and the taste to learn and discover.

–Ernesto: I think I can not specify, all my university days have been very good and I would have everything. The colleagues and friends, the professors and of course the training I have had, is what I value the most

6-What do you think now? What are you working or thinking about?

–José Luis: Right now enjoying my Arquia Grant at the Metropolis Foundation, at its headquarters in Madrid. A foundation dedicated to the development of sustainable and intelligent urbanism.

I’m learning urbanism, which unfortunately we young architects find it difficult if we are not in relevant architecture studios. And at the same time I am developing small projects and collaborations individually in Valencia.

–Ernesto: I’ve practically opened my own studio, Xarquitectos, so I’m totally devoted to it and all the work I’m doing.

7-Has anyone contacted you thanks to the prize won? Have you opened doors?

–José Luis: I have been able to contact and introduce myself to people who would not have had the opportunity in normal conditions. Winning a prize like this gives you to know, but with that alone there is nothing done but you work it.

–Ernesto: If I’m honest, I have to say no. Nobody has contacted me about the fact of having obtained this prize. It is also true that I have always had the objective of opening my own office, so I have not needed to look for a studio where I can work, where perhaps it would have been a support.

8-How do you see yourself ten years from now?

–José Luis: I do not like to look or plan for the long term, I prefer to work hard every day and enjoy the moment.

–Ernesto: Right now I’m focused on the creation of Xarquitectos, I’m starting with what you never know how it will develop. Obviously my dream is to prosper and continue to grow professionally.