The Crea Fest Winter 2018 was held on December, being a total success, where students from different degrees and master’s courses in the Higher School of Technical Teaching of the CEU Cardenal Herrera University of Valencia participated.

The participants showed the projects they developed during the semester, explaining how they started and the development process for each of the projects, presenting the proposals in a brief way.

It’s never too late to take advantage of the opportunity to learn to express the steps that encompass the realization of the project. The event allows you to practice what we will have to carry out in the future as architects. 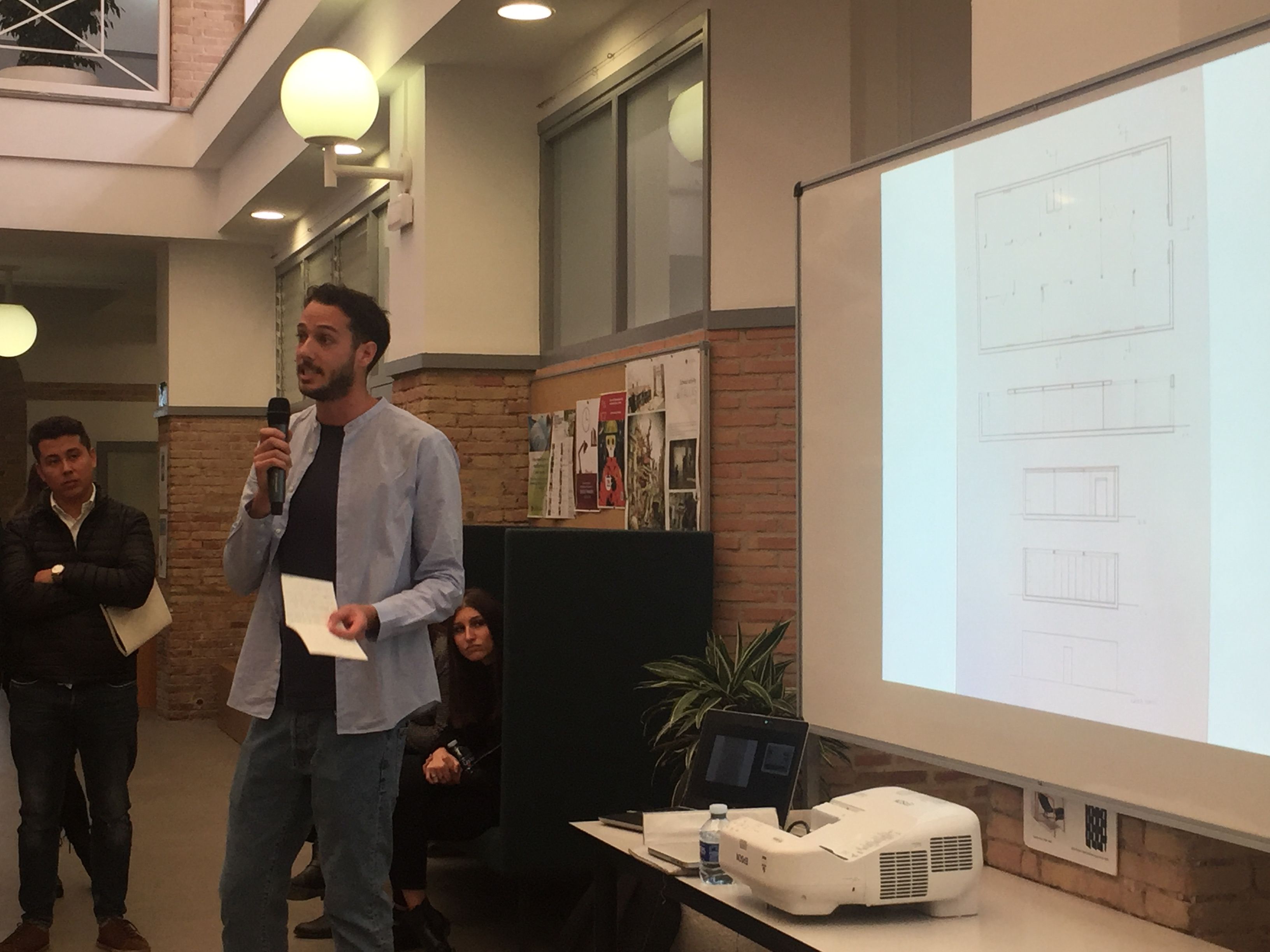 So, if our lives are so unpredictable and at the same time we have to be so flexible, why are not our houses?

This is the Noma House. More than a house, we would define it as a flexible system of space organization. The system is composed of 18 spaces with the same characteristics and dimensions, a square of 3.6 meters by 3.6 meters, all enclosed by folding walls. These folding walls allow the spaces to adhere and separate from each other, creating different uses with different dimensions.

There are 9 exterior spaces that organize the plot in two surrounding and 9 interior spaces or rooms that define the interior. The function of these rooms is not predefined, according to the way in which habit of the inhabitant would define its use. Depending on how you open or close the folding walls, depending on how you place the furniture in the space and even how they move around the house. Your home changes as your life changes. 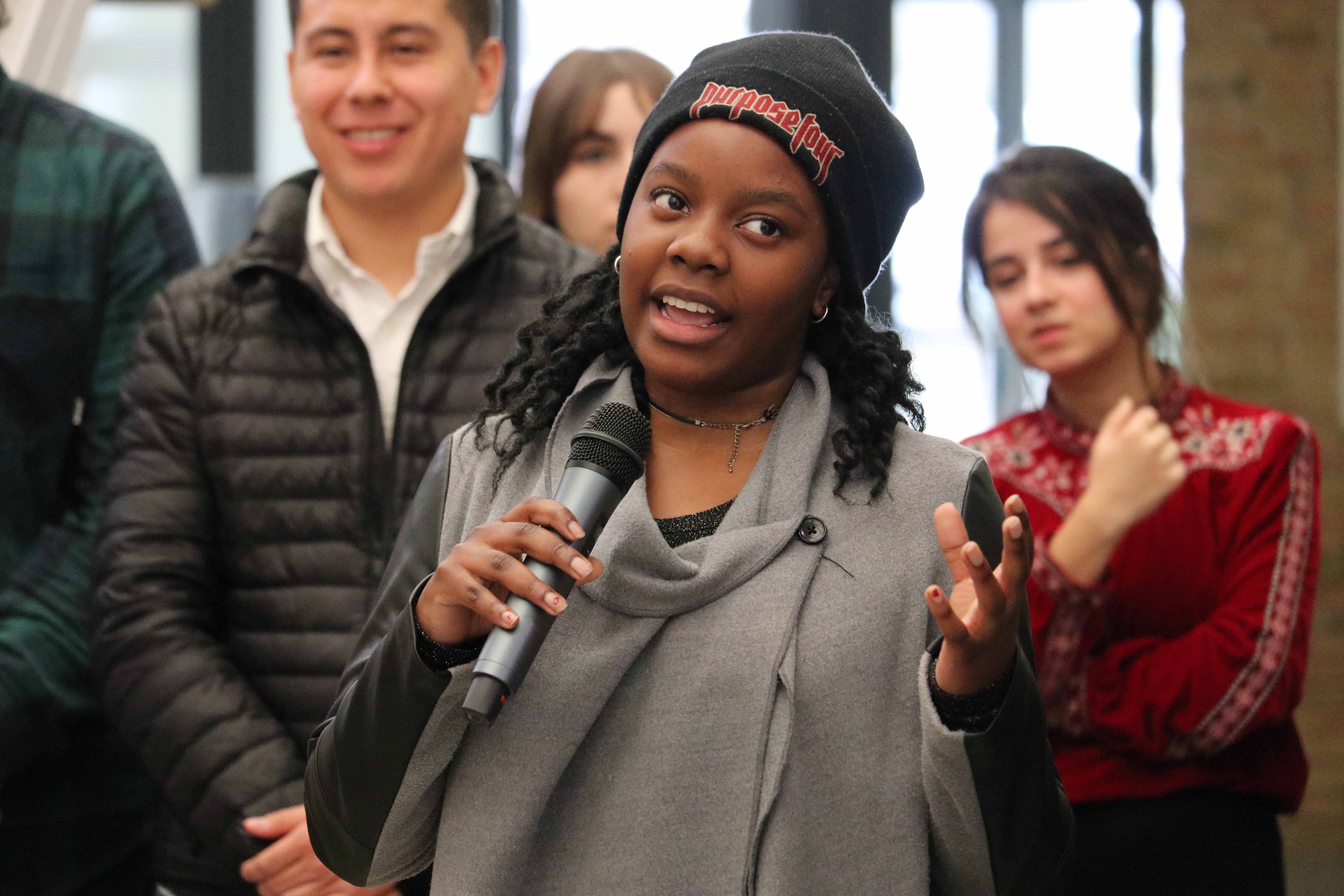 While listening to classical music in class, I envisioned a woman due to the songs captivating and calm demeanor. To attract attention to the women I made the hair of the women red with certain paint strokes. As the song continued the keys, the tones and the composition continued to change. Therefore, to capture this uncertainty I decided to make the women’s identity unknown by painting thick black lines through the eyes. This hides her identity and creates a statement. For the background, I created irregular shapes and outlined paint strokes I had created for emphasis. 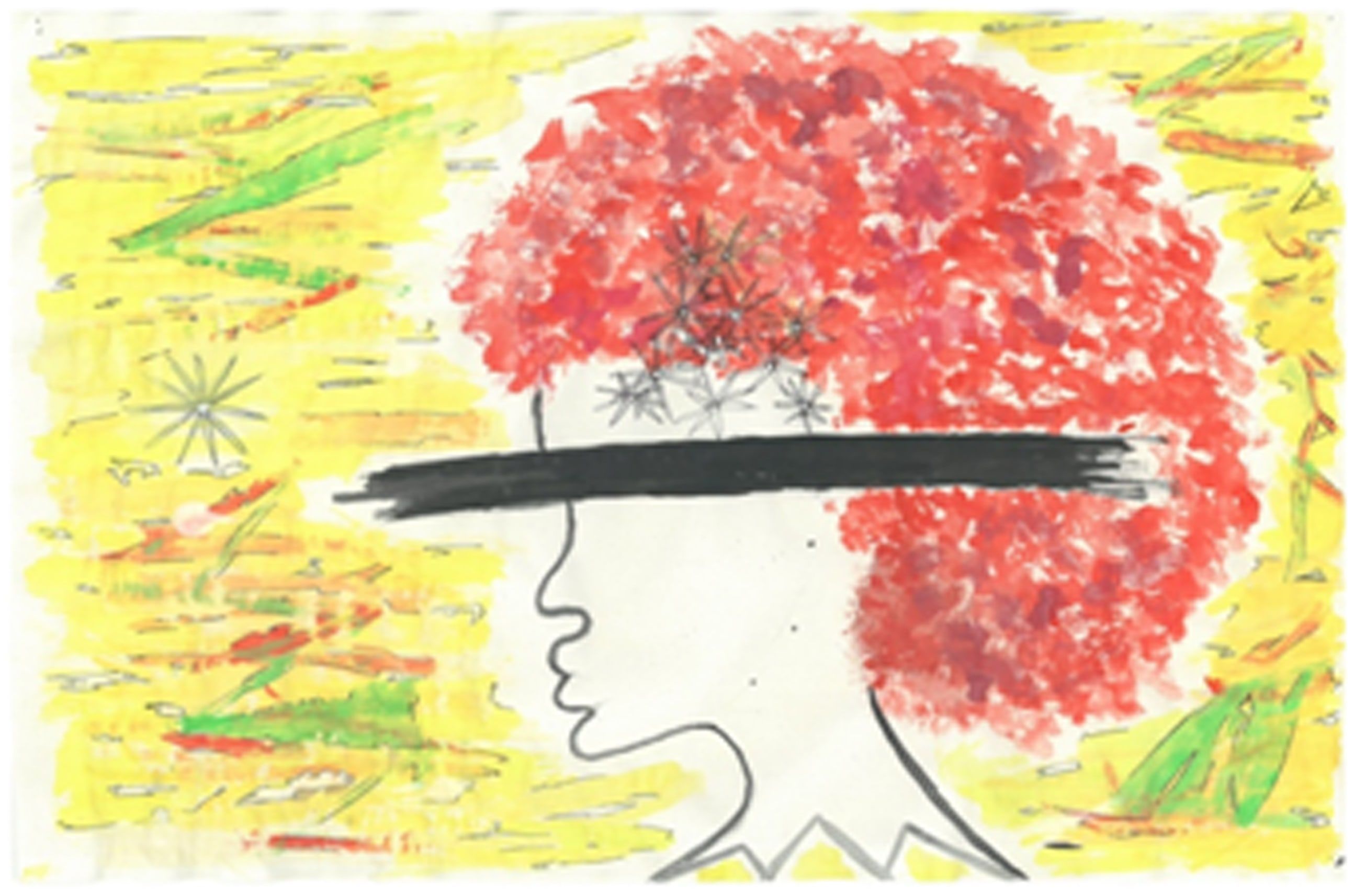 During the second drawing I listen to a song called Get you by Daniel Cesar. The song created a feeling of calmness and sadness therefore, I decided to make my drawing predominately blue. I started by creating circles using dots that were already placed on the page. These circles grew larger and started to create a center piece for my drawing. The song was talking about a kingdom falling so I created an abstract kingdom at the bottom of the page and including a person falling at the bottom of the circles. This formed direction downwards to emphasis something falling as well as creating a story. Furthermore, I decided to take use of lines and created abstract clouds. 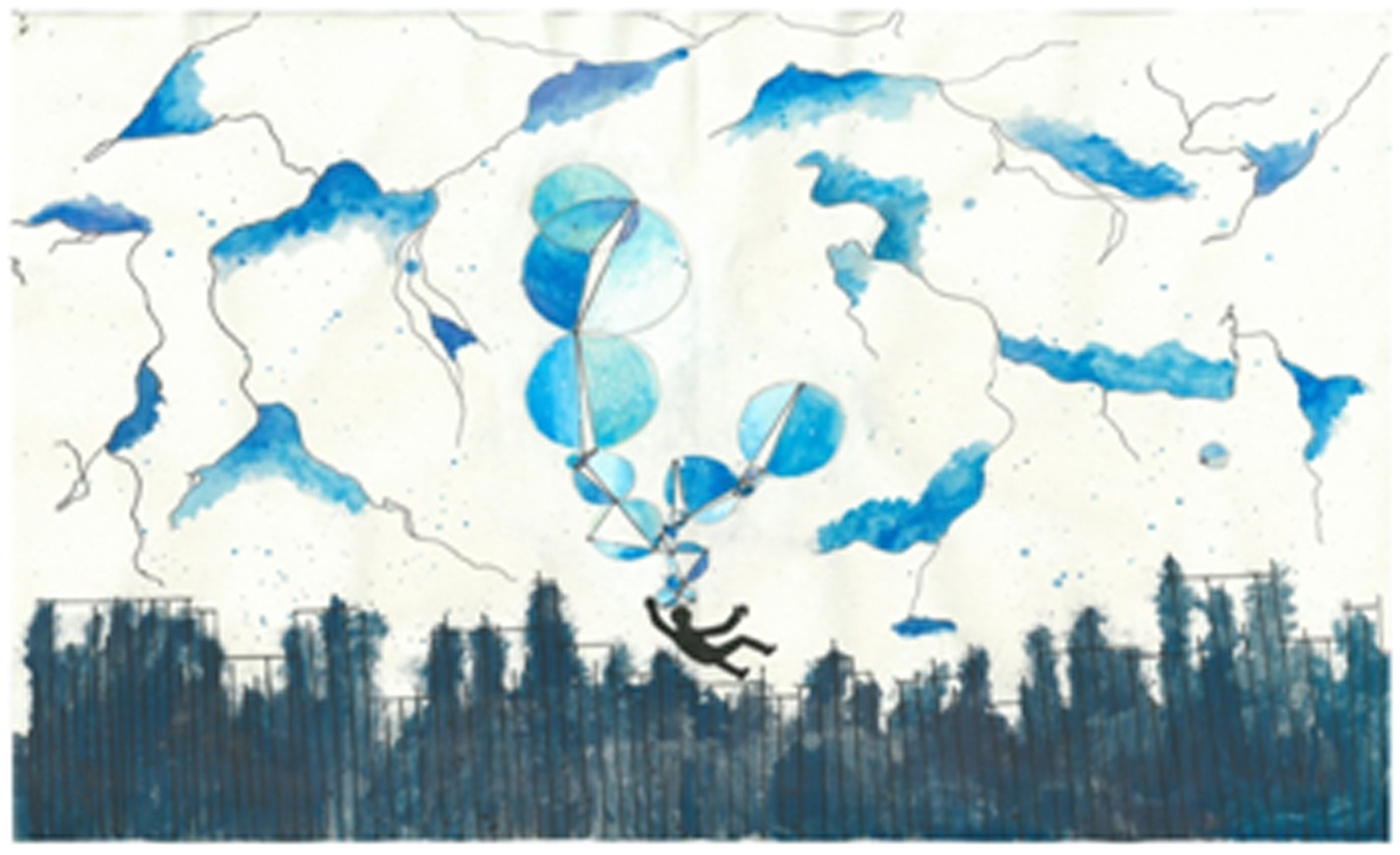 Using my drawing created in Seminar One B I created an architectural 3D model. For this my main focus were the interlocked circles I drew. They inspired me to create a domed shaped town of different sizes. To do so, I cut Styrofoam spheres in half and painted them different shades of blue still relating to my original drawing. For the domed buildings I decided to place them on a platform that was inspired my topography to create physical features of the area. Lastly, I transformed the lines in my drawing into trees to take nature into consideration for this town which would likely be situated in an area such as Antarctica. 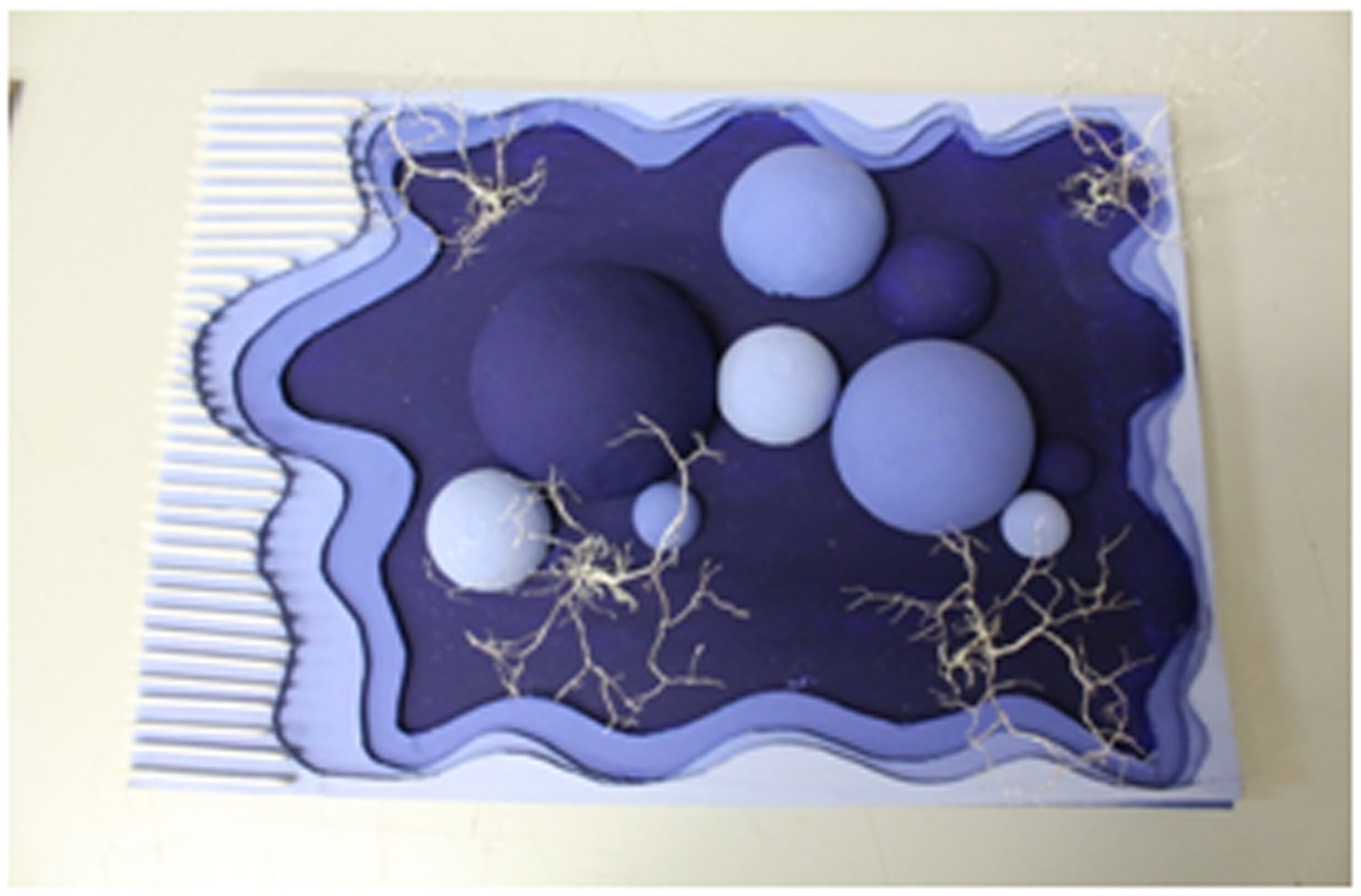 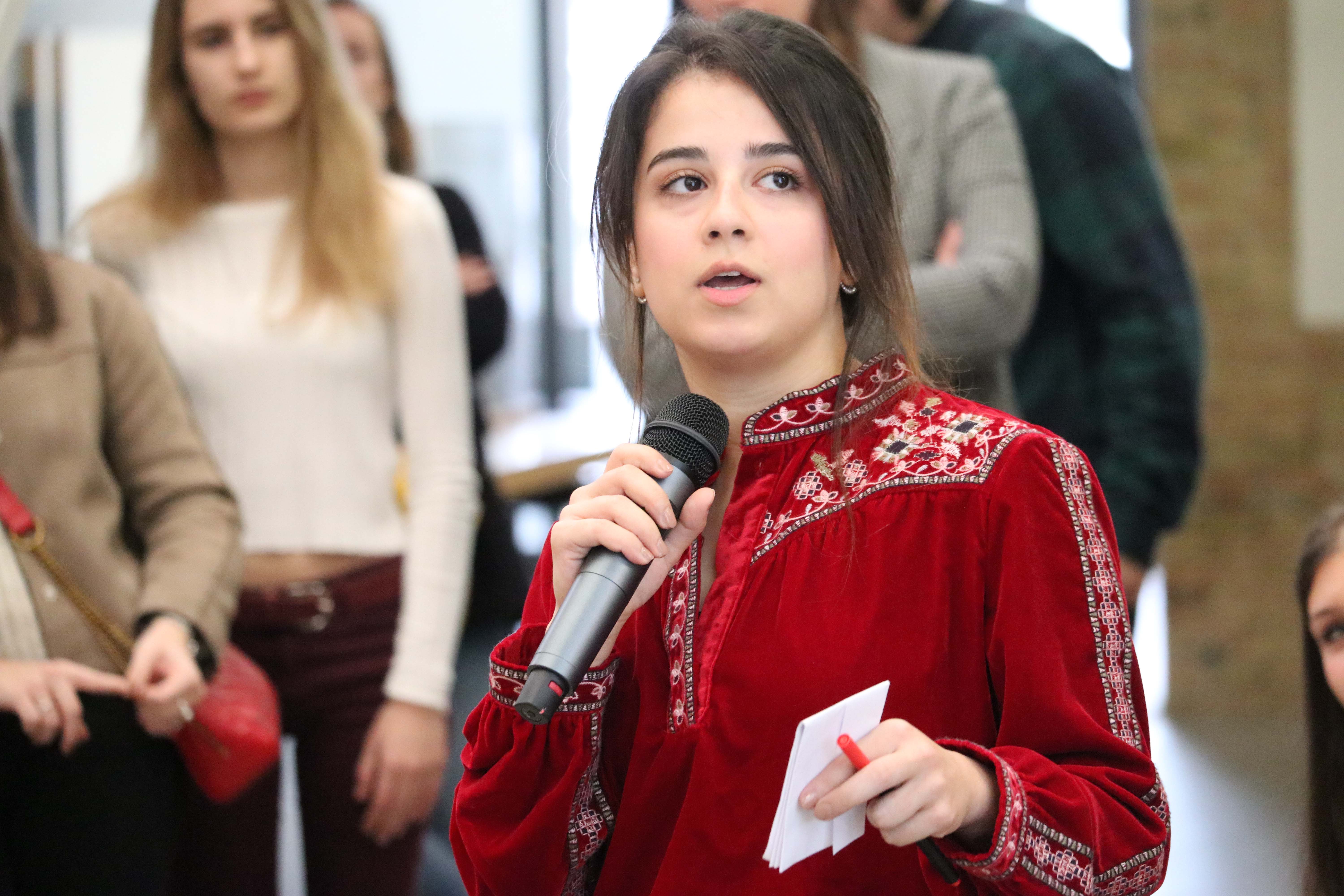 After the small exercises we started with together as a third-year architecture’s students, we had one big final project which professor Silvia Alonso de los Rios suggested to us, to propose a social housing in a huge empty plot located in Sagunto taking to account all the needs of dwellings, social housing blocks, services, materiality, structures etc. Respecting of course all the roles we must follow.

My idea is to work with separate units, because I wanted to create mixing housing types for different kind of uses and be more flexible with what I’m designing. Regarding the urban plot I was trying to follow the same orders as the surrounding and it also will give me a good orientation but instead of having one path line such as the building around, I could have more than one and in that case, it will creating me several kind of empty spaces where can I locate my buildings. Having different uses of stores and different heights of building respect to the surrounding, linked by a public space located in the centre. 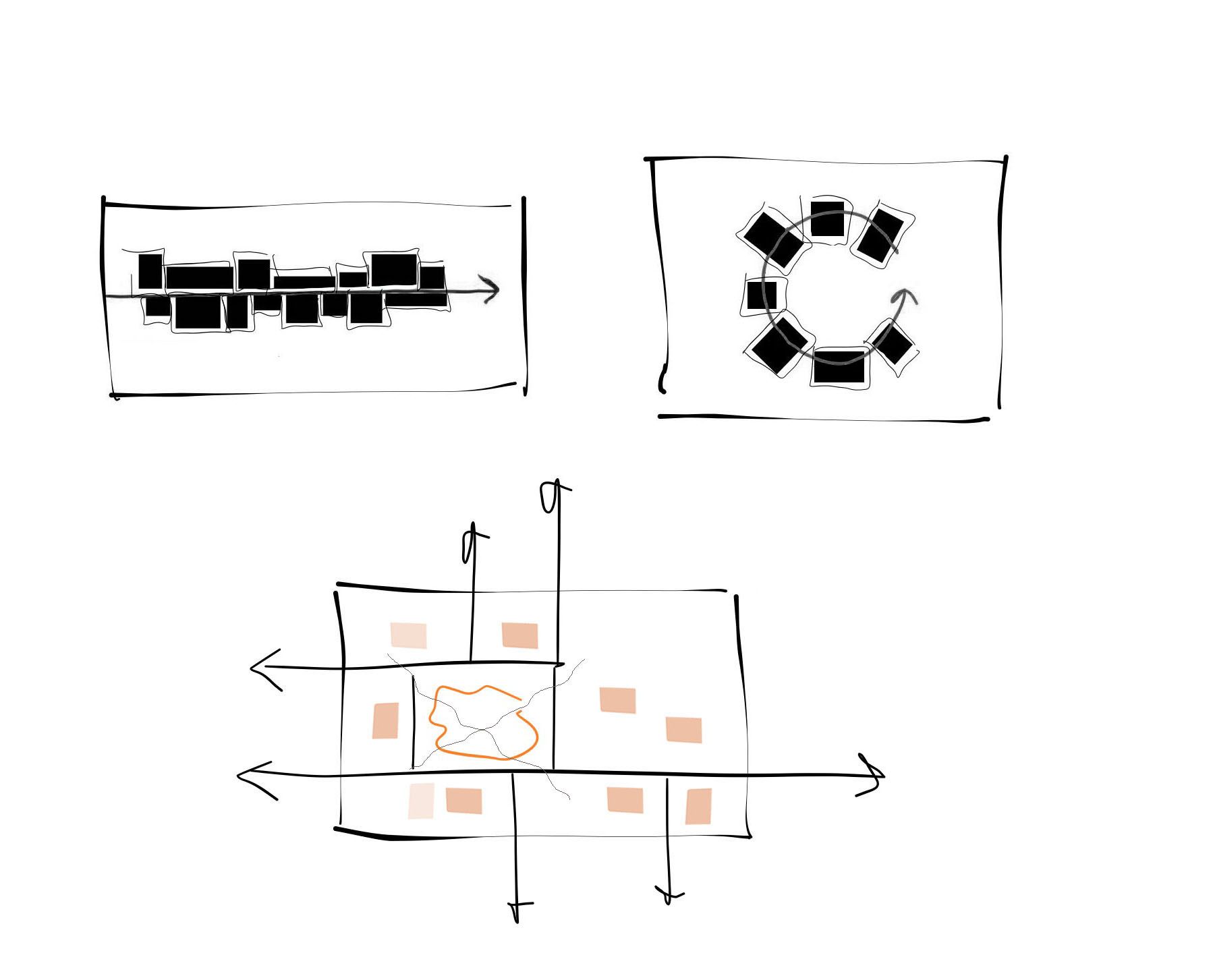 And regarding the typologies, it’s basically inspired by Mondrian’s painting, comprised of 4 apartments, surrounded by shared reticular terrace which organized with the main circulation of the building. I started drawing simple schemes and from my scheme I decide to participate each tow apartment from each other for creating more public spaces linked by the big terrace for the social communication, cross ventilation and to bring natural light for the stair case circulation. Beside that I went deeper for start designing the apartments inside each typologies which have some roles we have to consider, I decide each apartment have the L-shape including all the service area with inbuild furniture and since I wanted to separate the public and privet areas because each one have different kind of functionality! I decide to have “privet-patio” between them for having a mixture of feelings between inside and outside spaces and at the same time it assures to keep the privacy separated from the rest of communal spaces. 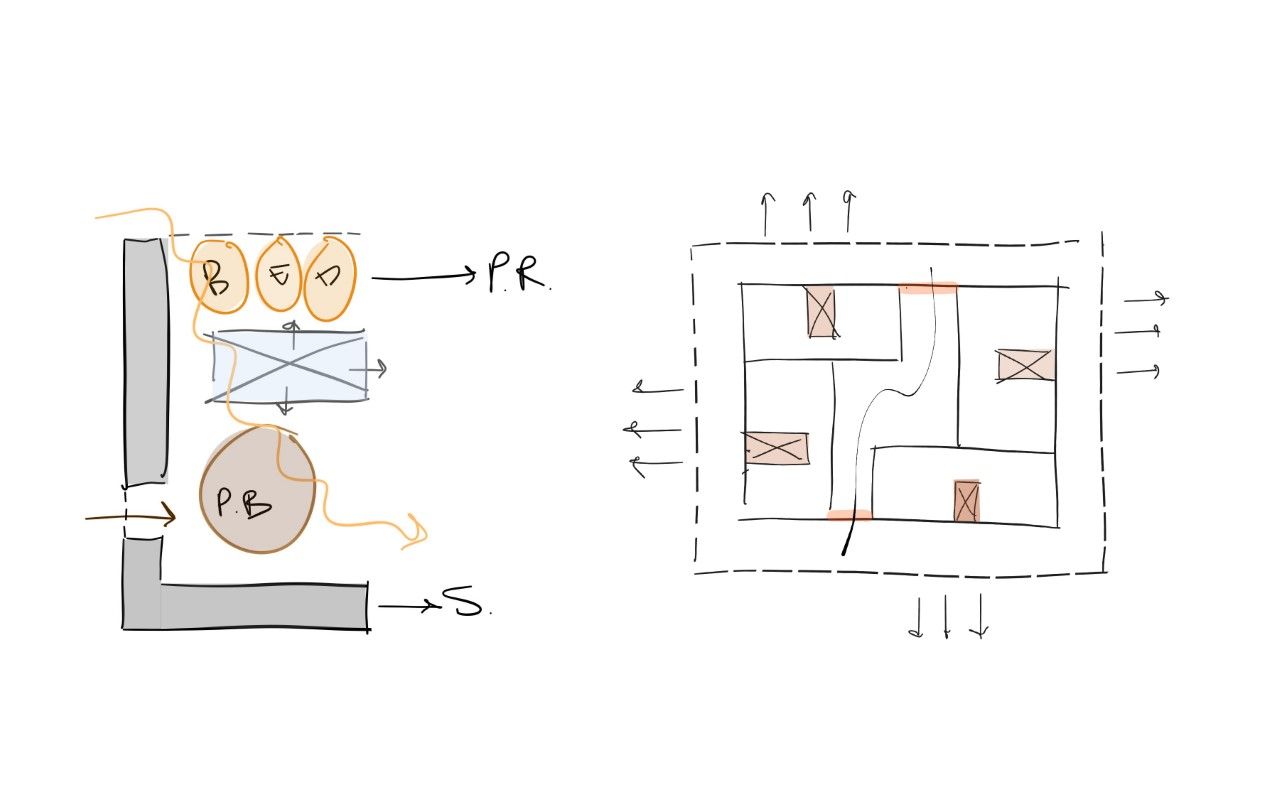 My idea was a bit complicated but simple at the same time and I think it has something different. As the classmates liked it in general, I received an extra dose of motivation. Now I think that if I have done this, I can do so much more. This course I had some doubt because of the huge size of the project, I was a little unmotivated, but this project and the fact of being able to demonstrate to myself my abilities, have helped me to confirm that this is my way. “ 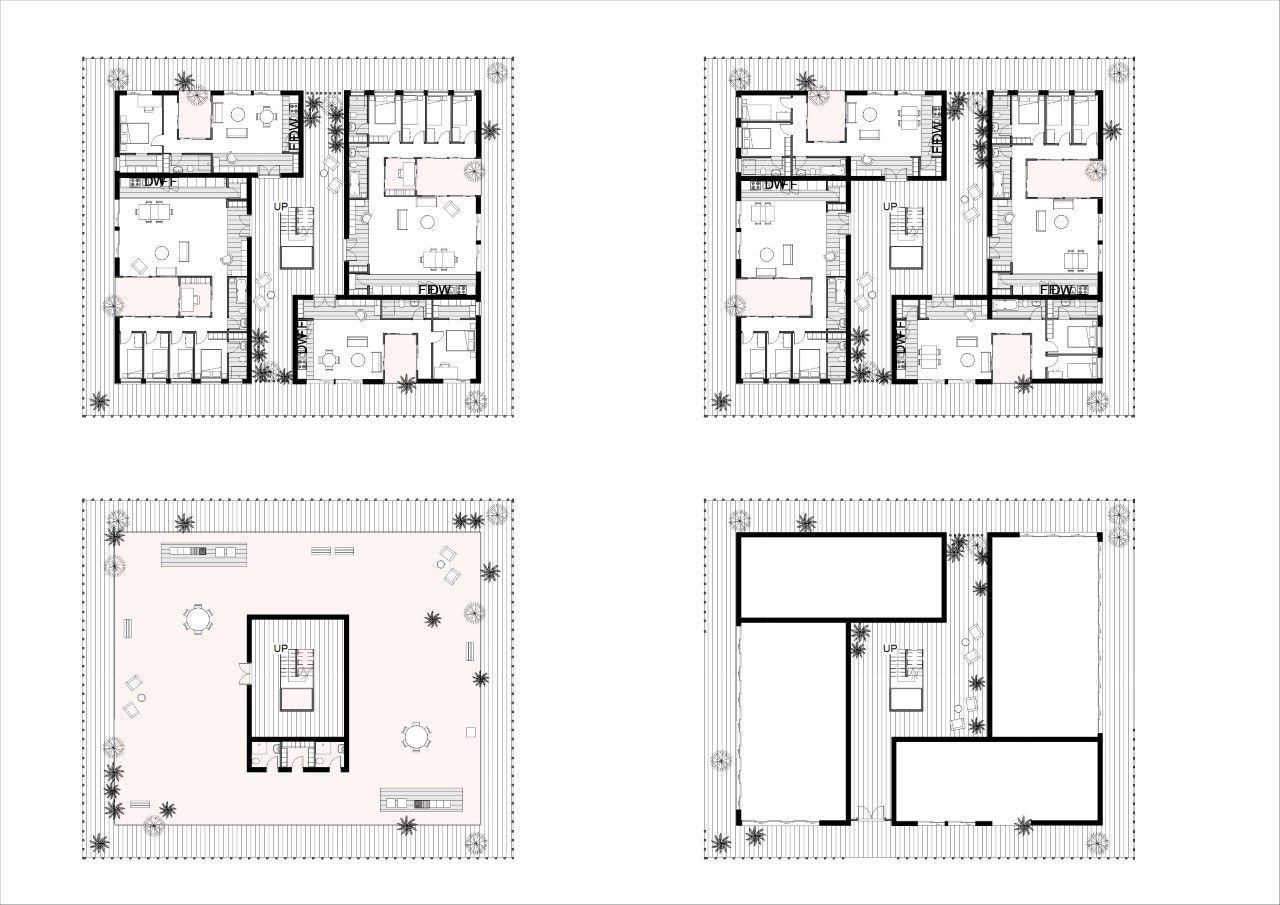 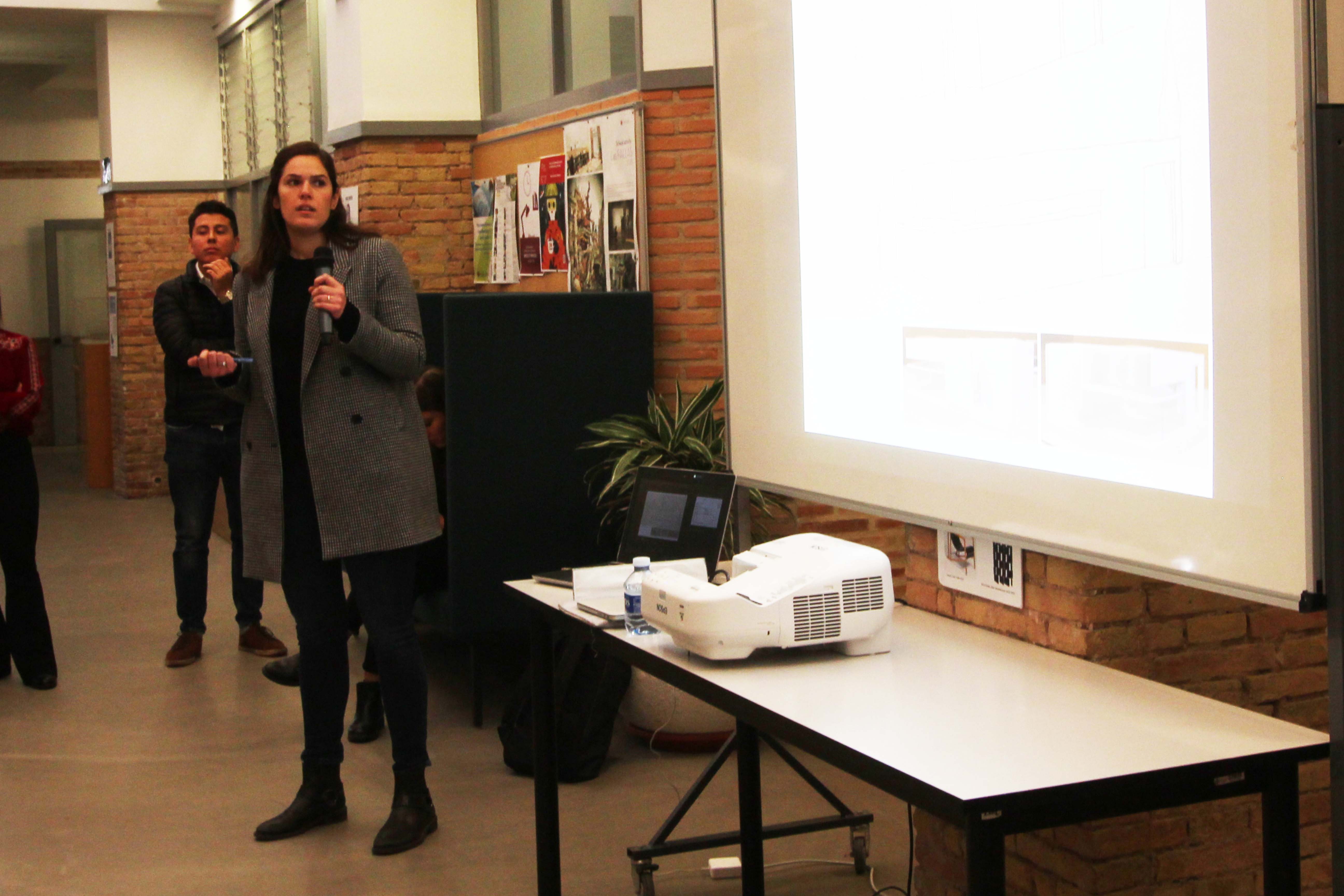 The sailing school plot is located on the sea shore of Sagunto. The area, as it is today, is not developed nor well planned, from an urbanistic point of view, and, compared to its potential, neglected.

My main mission was to create the balance between the existing life on and around the plot and the new sailing school square and building itself. In order to create that surrounding and community sailing school balance, I chose three tools, materials – related to the Sagunto old city stone and industrial iron, height – blending and not overlooking, and, mixed and integrated use – public space inside the sailing school, and large square outside the school, both, for the community to use and enjoy. 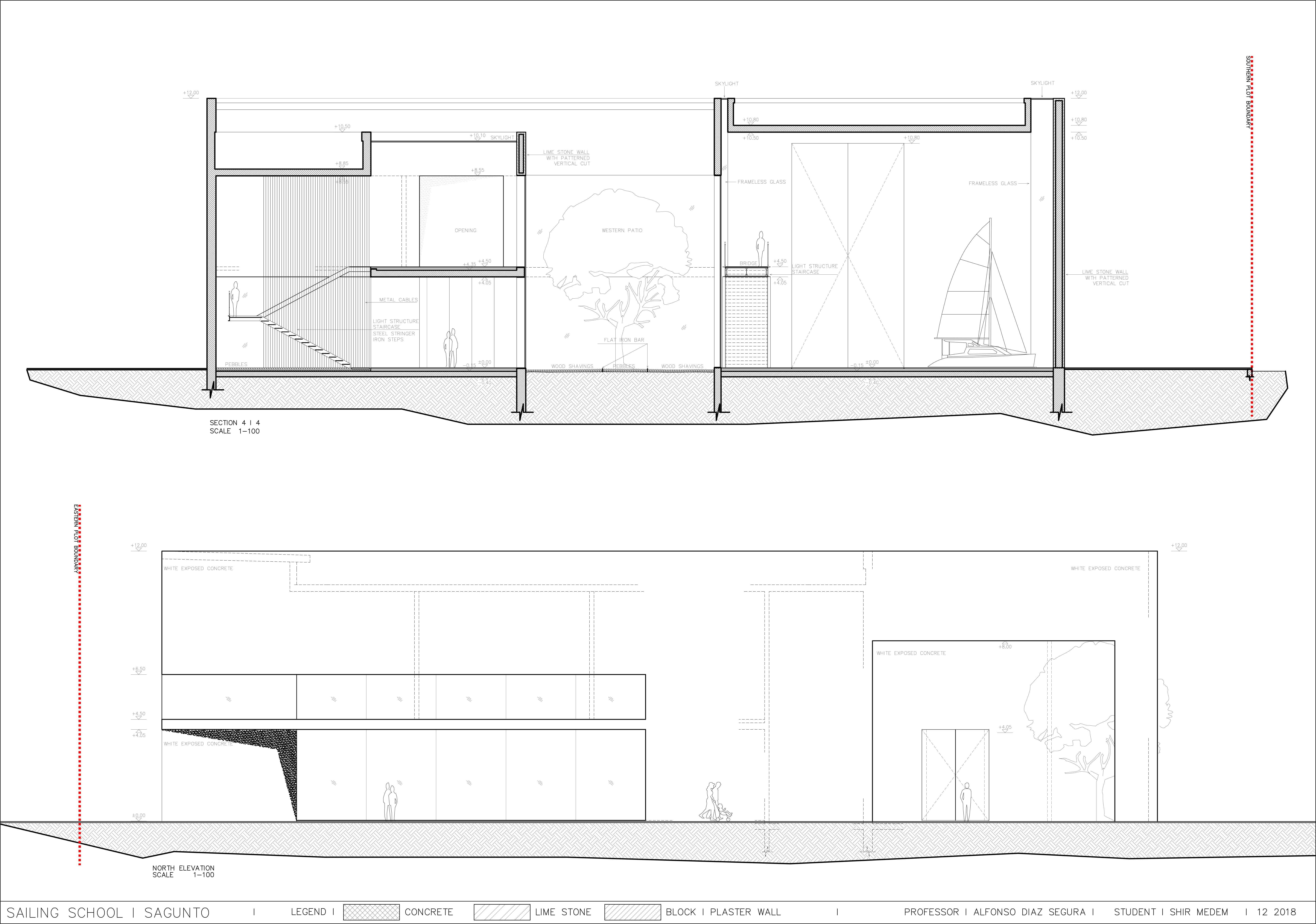 The building form is a white box with openings and extrusions. The openings are located to control the ability to view in to the building from the outside, and thus, to stimulate peoples curiosity. This is achieved by having only two narrow stripes of glass running from the bottom to the top of the structure and all around it. These glass stripes are planned to cause outside bypassing people “pick” inside the boats warehouse. Those intrigued individuals, could access the building using the large rectangle extruded foyer, “pointing” the access as a large embedded sign. Contrary to the enigmatic facade, the other two facades are more open and welcoming, revealing the gallery and the cafe inside, which can also function independently in the evening hours. The southern facade is completely sealed and dressed with patterned Lime stone, communicating with the main wall stretching inside the building, a tribute to the old city of Sagunto. 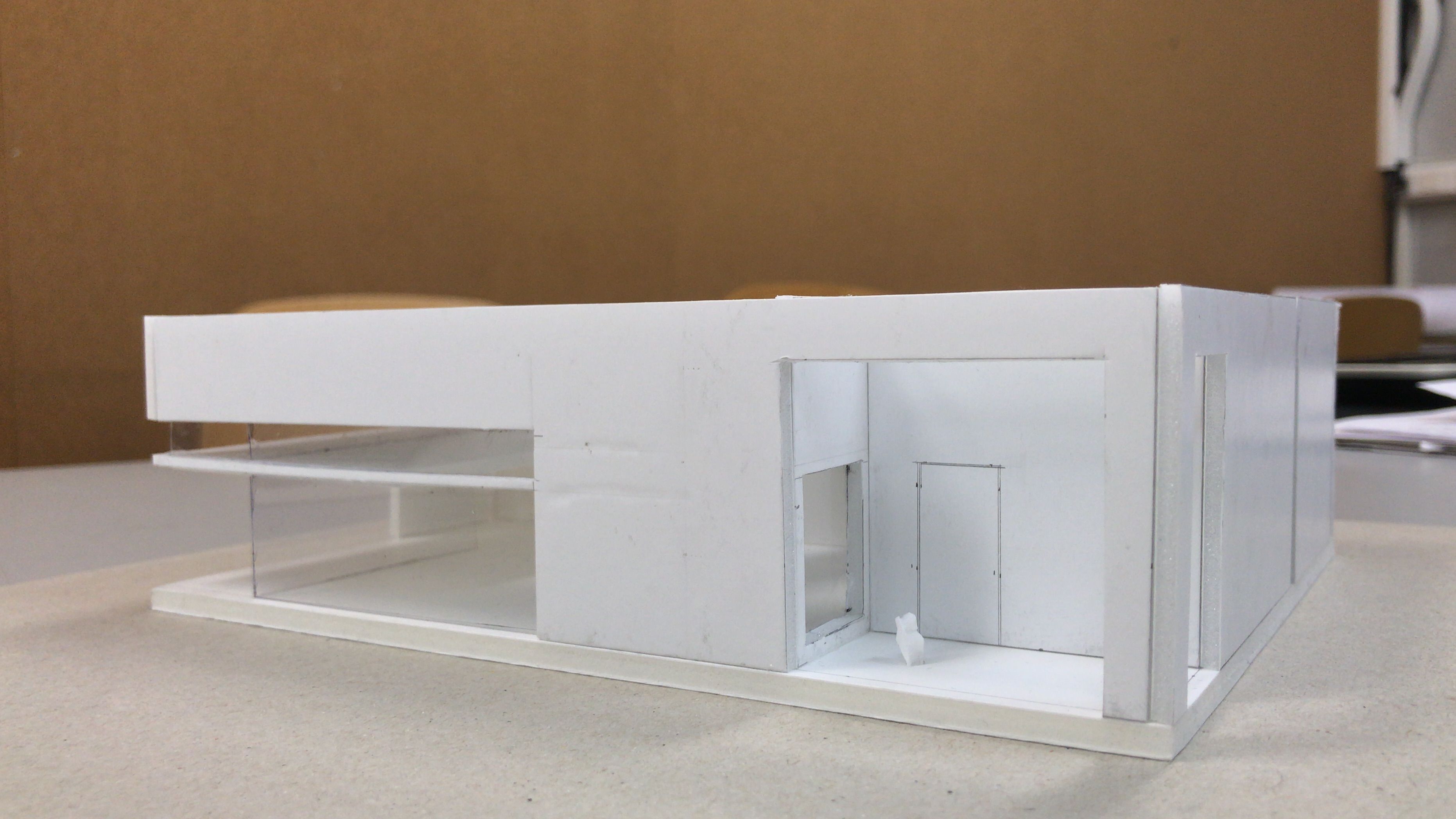 From the inside, the two stripes of glass, surrounding the warehouse, in addition to their role as generating curiosity from outside, let natural light in the building. Natural light enters the building as well through the vegetated patios, facing the public ground floor and the ware house, and, the skylight above the entrance. The skylight which has a module of 20-30-60, repeats itself in the warehouse eastern facade with a painted white, Iron cladding. Contrary to the ground floor, being dedicated for the public, the first floor is the sailing school itself. A steel bridge is connecting the school floor and the boats warehouse. 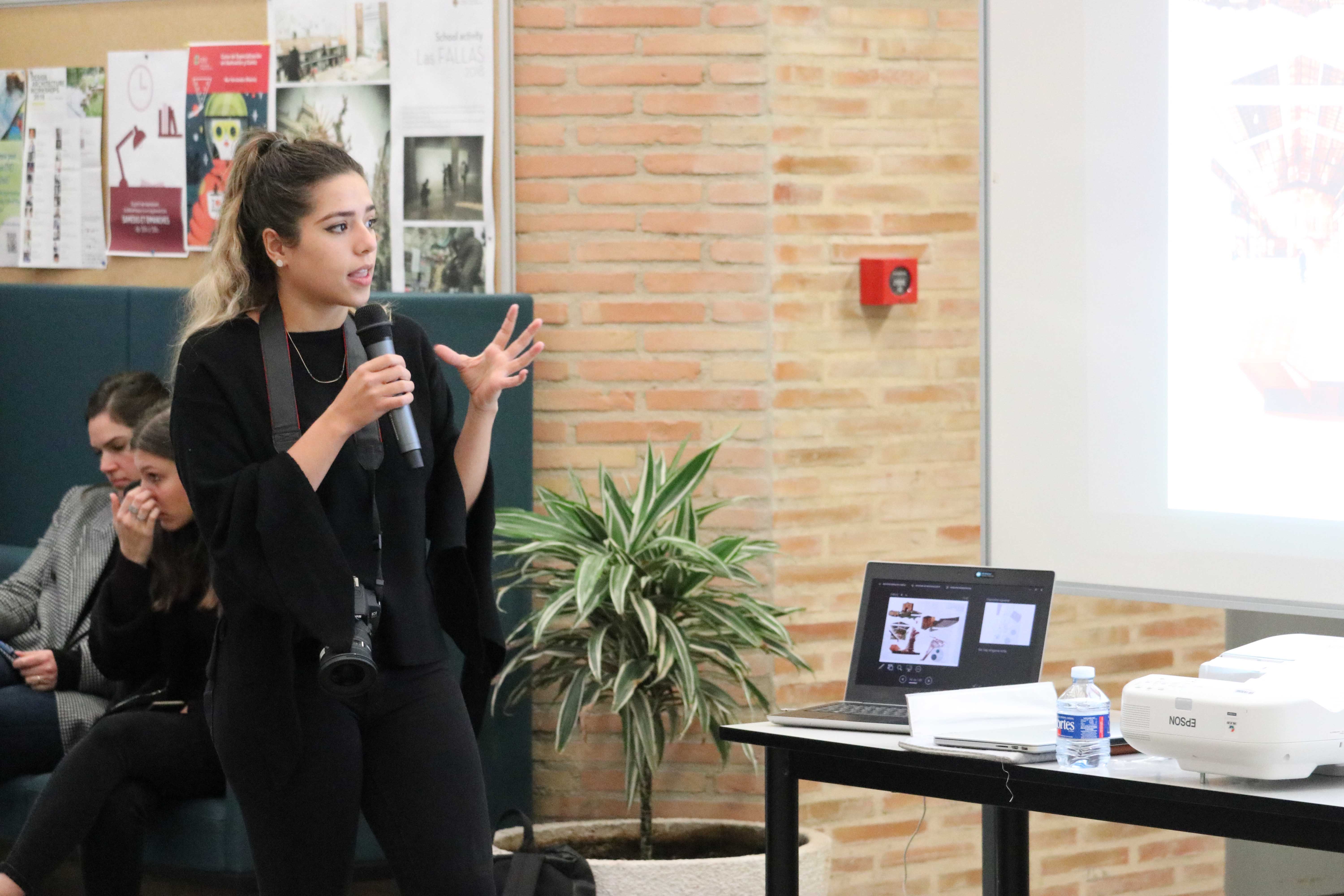 Sagunto is characterized for being an area with many fortresses, but at the same time, the port is considered a point that has been forgotten in history. Therefore, to promote the activation of this area that could currently be abandoned, a program has been proposed to re-promote the communication between Sagunto and the port of Sagunto. 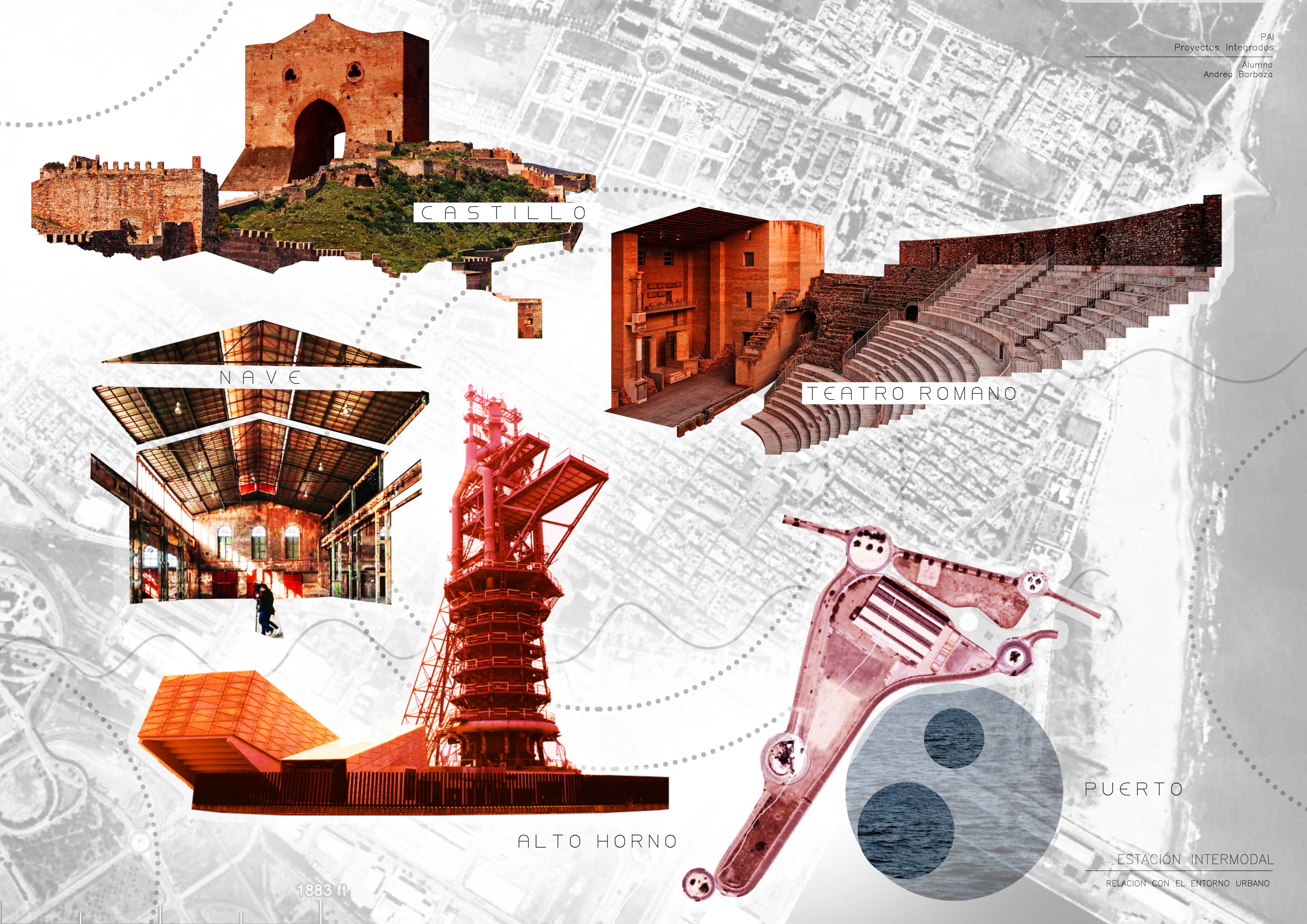 The intermodal station, which will contemplate road transport by tranvia and bus, will facilitate the disruption of this disconnection   in the area, communicating several strategic points such as the port of Sagunto, beach, residential area, industrial area and ancient emblematic places that have a great significance for the citizen. 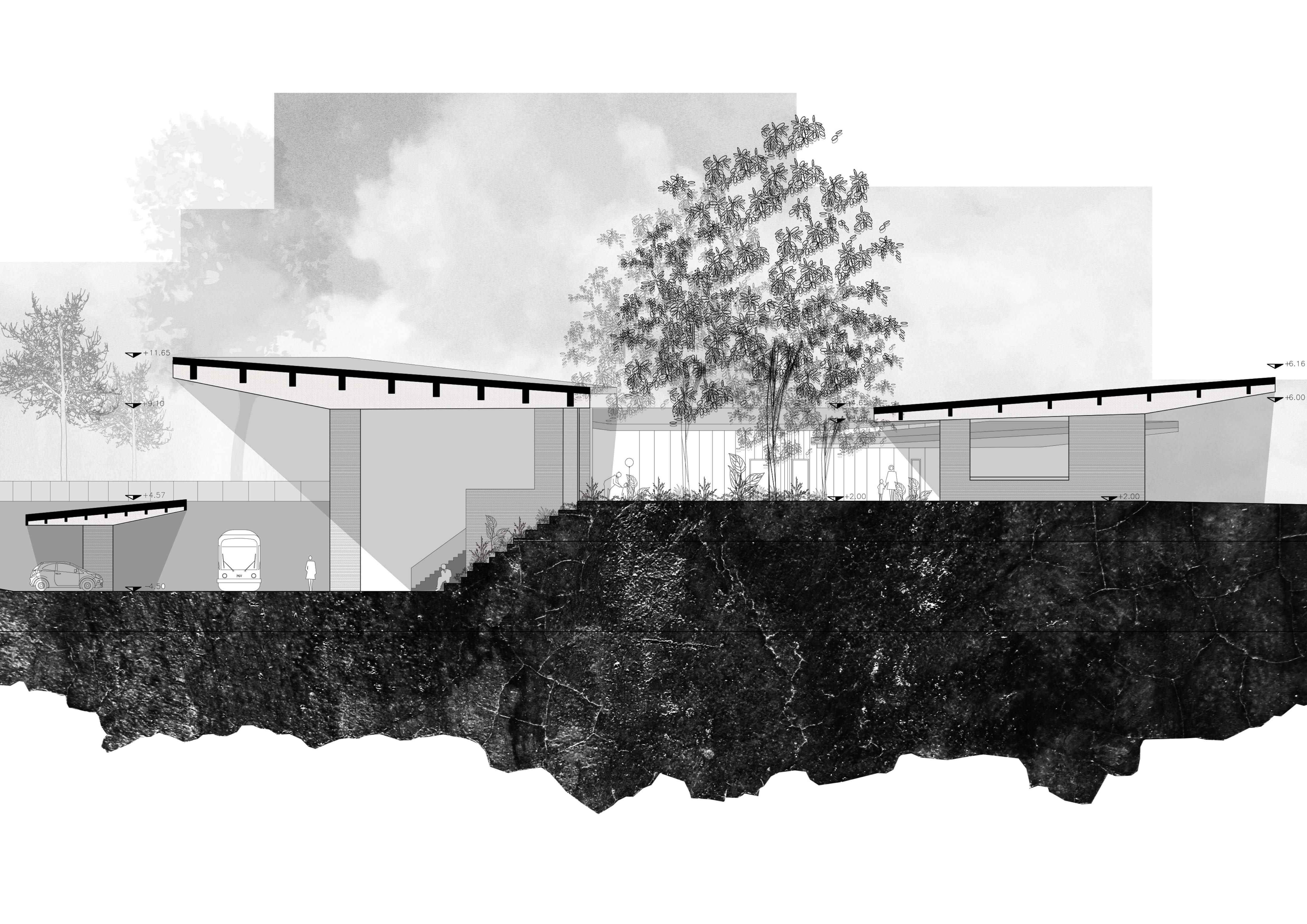 With this proposal the construction of a building that responds to the needs of the program as well as the environment, a circular form that behaves as a kind of label that is responsible for collecting the different flows that arrive at this site to distributes them . Its circular form facilitates the division of the building into sections that behave independently of each other, each module will respond to both the climatic and spatial needs of the site, which is why there is a certain dynamism in the height of the roofs and their inclination. 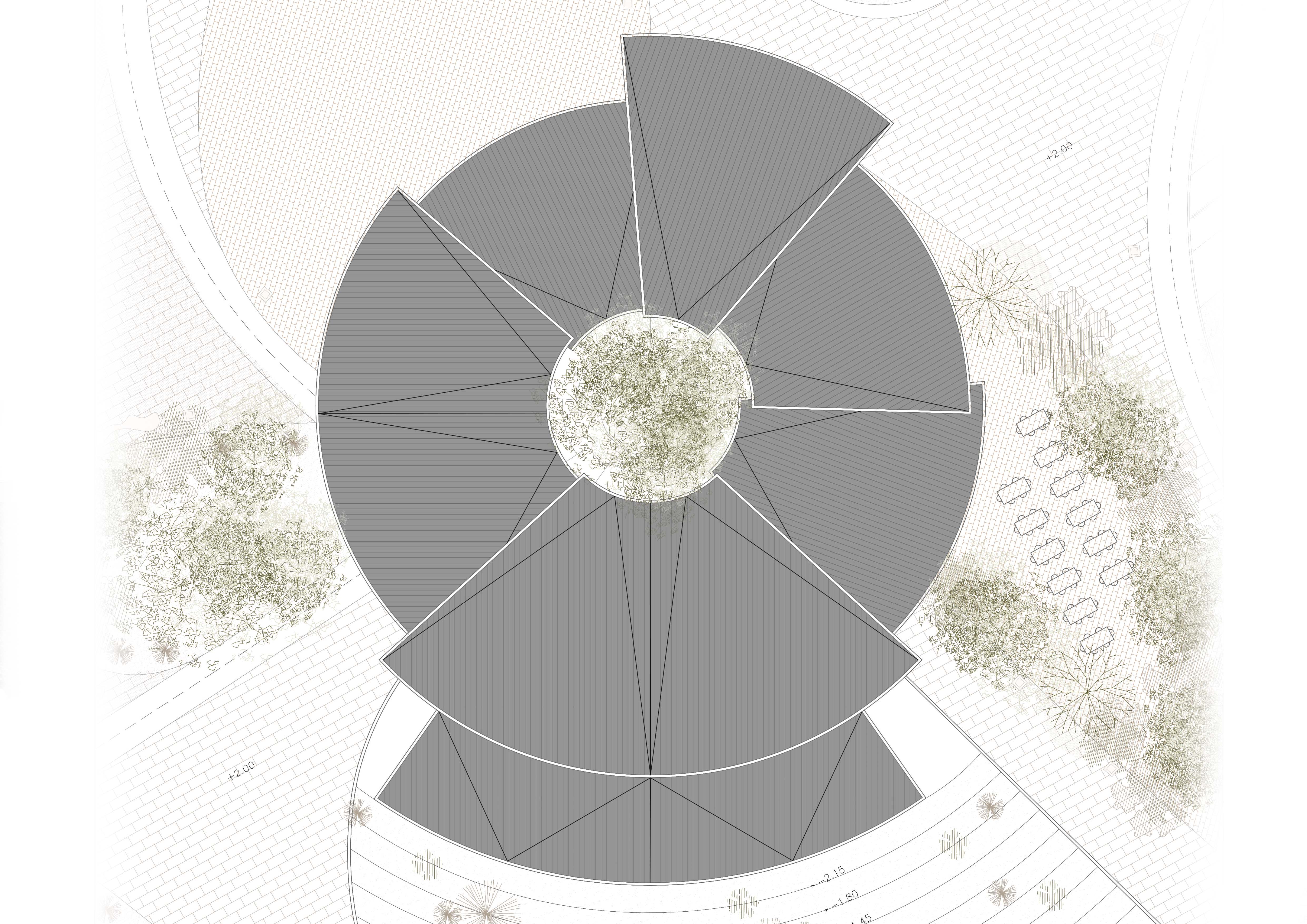 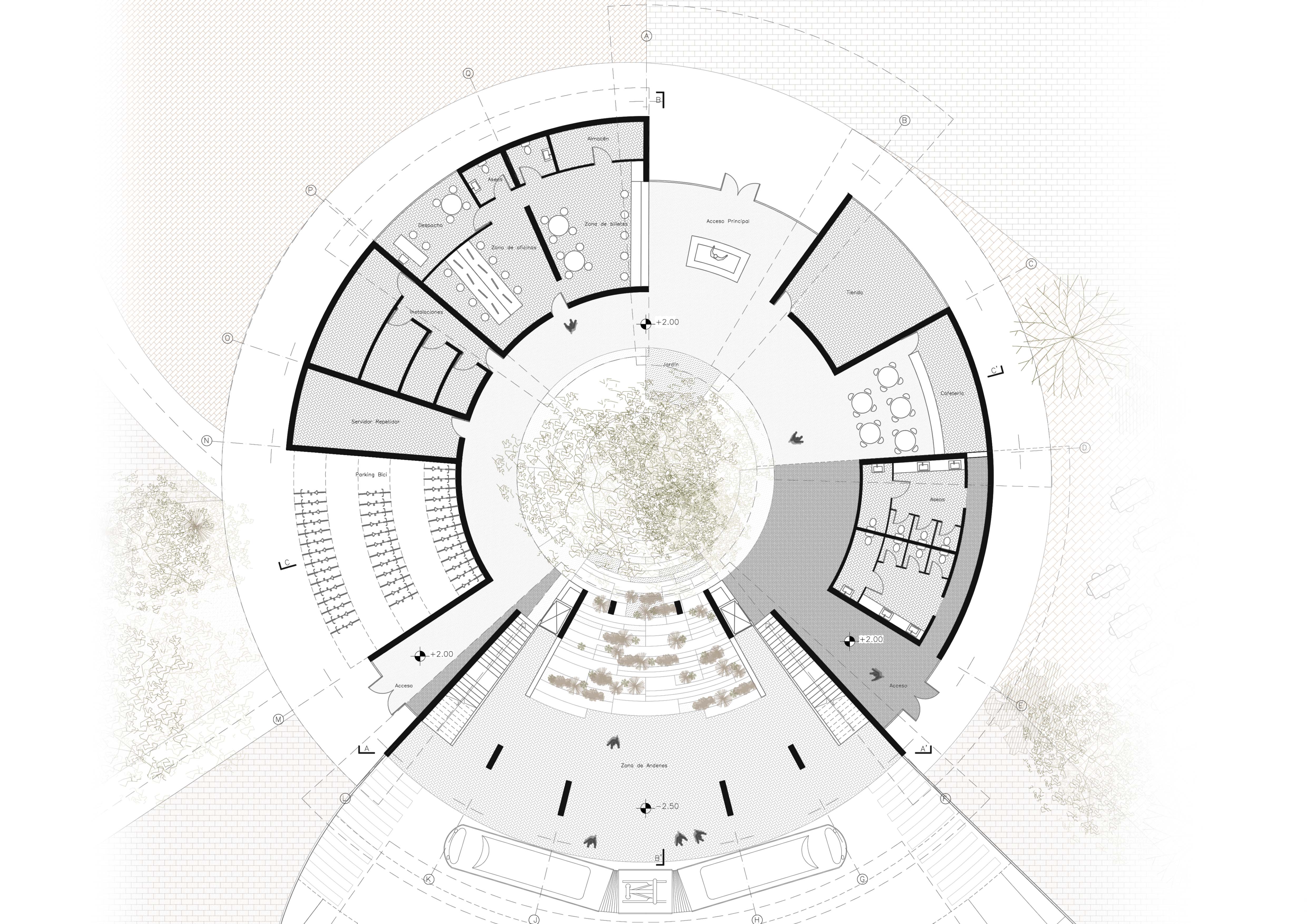 Important parameters that are not missing to mention are those that made possible the realization of a sustainable building, thanks to its materials, orientation, response to climatic conditions, among others. 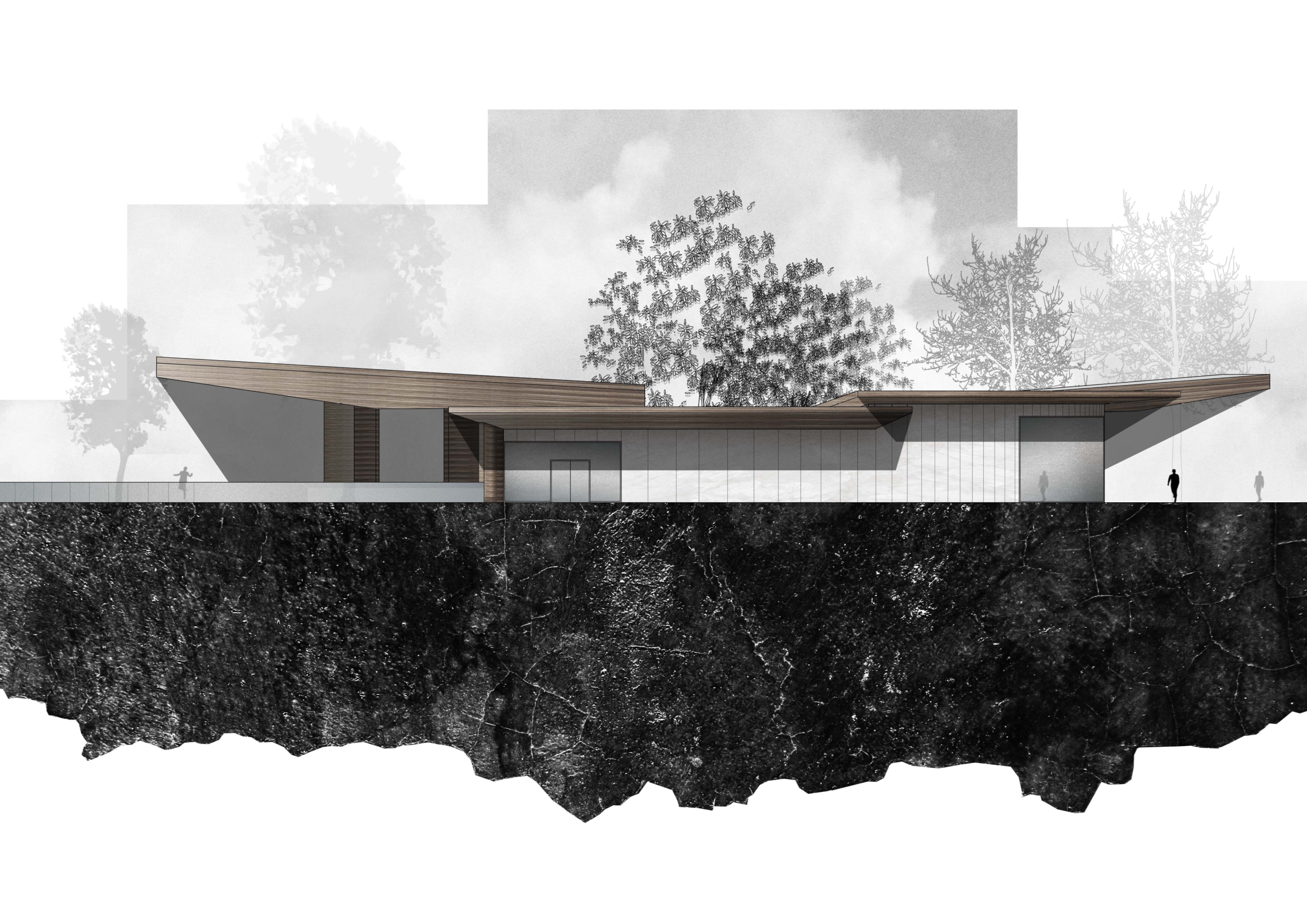