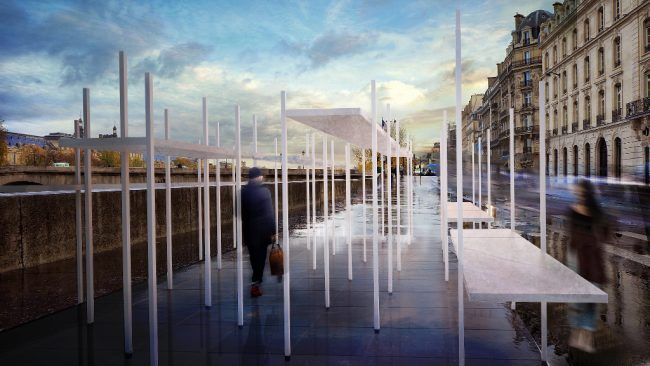 Architects Sergio Alfonso Salvador (graduated in 2013 by the CEU Cardenal Herrera University) and Vicente Picó Vicent (graduated in 2015 by the UPV) have won the second edition of the awards sponsored by CEVISAMA, ASCER, and the ITC, for the design of an exhibition space at Trans-hitos.

The project by Sergio Alfonso and Vicente Picó was unanimously chosen by the jury, chaired by Jaime Prior Llombart (CTAC president) and composed by renowned architects Ignacio Vicens y Hualde and Jesús Aparicio Guisado, as well as three chairpersons on behalf of CEVISAMA, ASCER, and the ITC.

“Firstly I would like to thank my teachers and classmates for letting me grow as an Architect and as a person, because UCH CEU was my home since 2006 until 2013.

I finished my degree in Architecture three years ago, although things are not easy I can assure you that If you follow your goals you do not waste your time.

It has been a true honor winning this contest, an example of how a UCH CEU student can face a challenge and show that Architecture is a very rewarding profession.”

Titled “Esencia” (“Essence”), the project aims at being a tribute to the Valencian Albufera landscape. Sergio Alfonso and Vicente Picó highlight the relationship between ceramics and the Albufera, being “a place where soil and water reside, with raw materials resulting from clay, fundamental element for ceramics”.

With the goal of making this material known to the general public, they favor that visitors closely admire ceramics, covering exhibition elements with ceramic tiles in all their sides.

“Esencia” will be shown at the Trans-hitos ceramics for architecture exhibition during next CEVISAMA edition which will take place at Feria Valencia from February 20 to February 24 2017.