Inma Soler Tomás, Carlos Pueyo Vicente, y José Manuel Carbonell Gaspar, Architecture students from the Technical School of Design, Architecture and Engineering at the CEU Cardenal Herrera University, were awarded an Honorable Mention prize competing against the 80 projects that entered the X Aula Cerámica Hispalyt, designed by Architecture students from all over Spain, as well as by recently graduated architects. All of the 80 competing projects had a high quality level and received very positive feedback from the jury.

The jury was composed of renowned architects, such as José Ignacio Linazasoro, Julio Grijalba, José Antonio Martínez Lapeña, Manuel Portaceli, Juan Luis Trillo, and Enrique Sanz, together with Carlos Hernández on behalf of the president of the Tiles section from Hispalyt, the competition organizer.

In the case of the project by Inma Soler, Carlos Pueyo, and José Manuel Carbonell, the jury highlighted “the plan organization, which not only follows the bastion lines, but also takes into account the existing tall buildings in the Island”.

Abstract from the awarded project by our students:

The project concept constitutes an intervention at the place where the old wall trail ends, connecting the bastions at the north and fulfilling the island promenade through the wall, with a similar square, from which a third landmark -our tower- emerges as the access to our program: the hotel. The traces of the old rooms of the fishermen within the wall dictated us the rules for designing the project, turning it into the beginning and the end of the wall of the times.

The trace of the (never built) castle at the south bastion in the Tabarca Island marks the origin for a vertical path, in two directions: towards the heavenly, the ethereal; and towards the earth, the mass.

To inhabit the two elements in our project: the horizontal one, base of the bastion which shall be hollowed out. It’s been a shelter for the fishermen tools until quite recently, now transformed into a hotel with white light taken from within the tall white column. And with red light that enters the rooms at sunset. The vertical element is a tower embracing another tower, scaling it and descending it.

To point rooms to the west and the restaurant to the east. 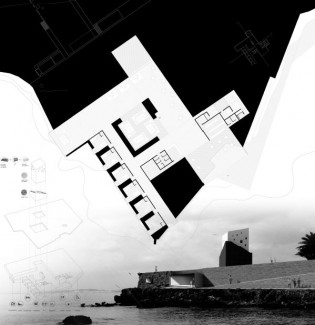 To contemplate from different levels, and be contemplated from all possible places. The sea, every second and in every walk: time and space.

To move around the inside and find views. All views to the sea.

To walk from the cafeteria to the beach. 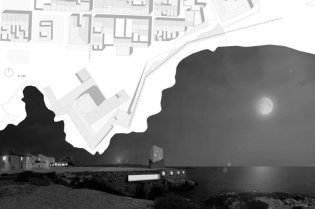 To build the tower as a volume that develops the program towards the subsoil, creating a void. The facade is reinterpreted as a brick skin at the inside with a whitewash finishing, and an exposed brickwork skin at the outside, whose deconstruction configures the stair. 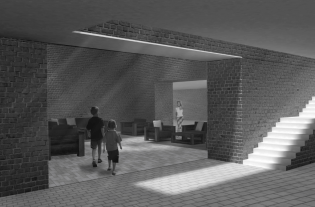