From my point of view, the Fallas festival can be seen as the celebration of New Year in Asia or the welcoming of the spring. When the Ninots are burned, all the bad things during the previous year will be removed; It is also a good time to welcome the spring. As you can predict, there would be many activities around the city centre before the actual festival starts!

This is one of the most traditional events during the last weekend before Fallas, making the Ruzafa neighbourhood a great stage of lights and colours that surprise the spectators. Four winner streets were illuminated for the first time on Friday, March 10, 2017. I said winners here as they have spent more than 11.000 euros in making this impressive model of light. They are Fallas Cuba-Puerto Rico, Falla Sueca-Literato Azorín, Falla Cuba-Literato Azorín and Falla Avenida Malvarrosa-A. Pérez Cavite (in the maritime district), according to the streets where they are located.

The earliest lighting show started at 20:00 at both Malvarrosa and C/Cuba. The special features of the one in Malvarrosa are the use of 500,000 light bulbs and 800,000 micro light bulbs in the structure of the portico, reaching a maximum height of 27 meters; On the other hand, the illumination project in C/Cuba was in charge of illumination company Ximenez and it is composed of 300,000 led lights and 3D lamps along the 400-meter street.

The lighting of C/Sueca- Literato Azorín took place at 9:00 p.m. The lighting structure is inspired by the Colon Market. On the day of the inauguration, the lighting was accompanied by the live music of the symphonic band of the Artistic Union Musical of Montroi. The illuminated streets are so breathtaking and there were so many people watching it that we wish that we could have rented a house in the centre during the whole period of Fallas (even though it will be very noisy at night I believe).

If you missed this time, no worries. Until the end of Fallas, these streets will be lighted all nights.

It would be a pity if you attended the Fallas without knowing the existence of one of the biggest Fallas commissions, Na Jordana. Calle Na Jordana is located in the old town of Valencia (Ciutat Vella), specifically in the zone so-called Barrio del Carmen. It has more than 125 years of history and it is one of the most laureated fallas in the history of this great festival in Valencia. The origin of the name comes from a lady whom husband’s surname was Jordà; thus, the prefix ‘Na’ refers to the formal way of treating women and ladies in old times.

On Saturday at 12:00, about 10 students, teachers and members of the Campus Life team from CEU Valencia attended a paella get-together event organized in collaboration with Falla Na Jordana. Before the actual cooking started, Salud – a very generous member of the commission showed us the Casal (the house of the organization). Symbols, awards and outstanding Ninots are permanently exhibited there.

At around 13:00 p.m, we were introduced to Chimo (his real name is Joaquín) and Quique (Enrique), who were going to teach us how to cook an authentic traditional paella Valenciana. First of all, the ingredients were: Rice La bomba – the best type to cook paella, chicken and rabbit (fundamental meats), special bean types called garrofón – essential, baxoqueta (flat green beans), aceite de Virgen extra (olive oil), tomato sauce, salt, and a special condiment you can get in any supermarket. 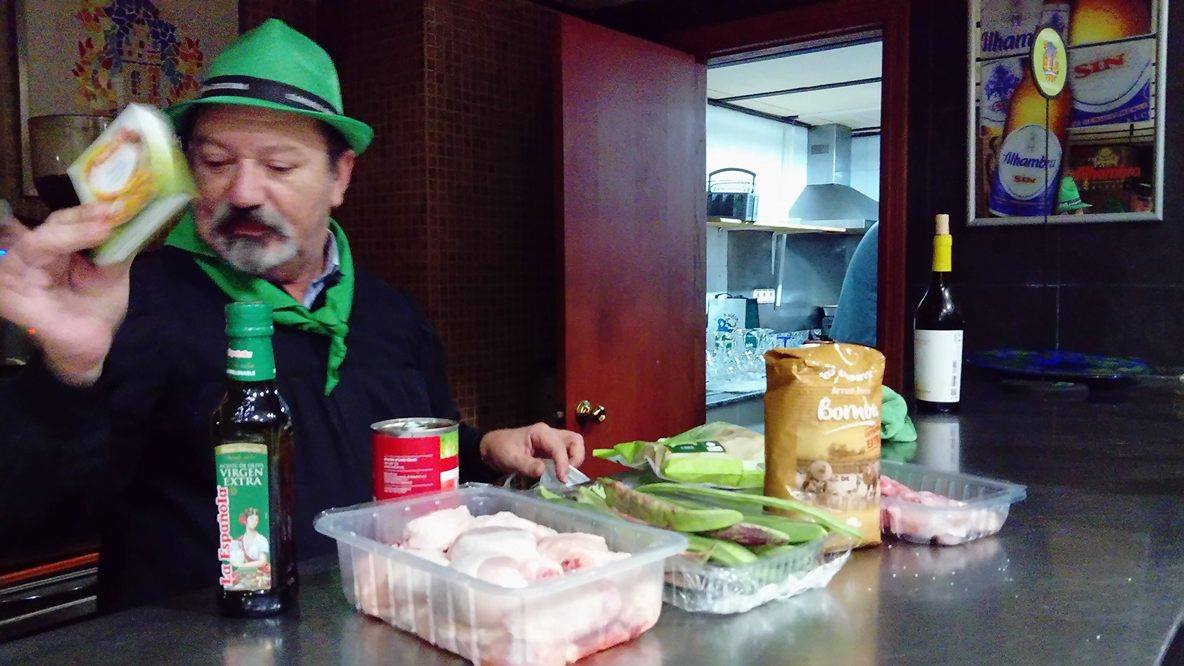 You can find the steps to do paella on the internet, so there is no point to writing it here. I will tell you some curious points I have experienced during the day. First of all, the setup of the cooking area contained a layer of sand (arena) in order not to burn the floor; firewood (leña) and the tripod structure (trébede forja) to make a good distance with the fire. Secondly, why do only men cook paella? You know that cooking with fire is quite dangerous, and the paella pan is also very heavy as well; by the way, women normally cook during the week, so in the weekend, men can take over the duty. Next, tomato sauce is nowhere to be seen at the end of the cooking process, however, it has a great role in blending all the ingredients. Another fact is that you will be asked to taste the broth (caldo), and if you are new to this, be careful because the cook will trick you by putting a lot of salt in the spoon that you are going to taste!!! Finally, rice is the last thing to be put in the pan. It has a rule of how to pour it so it forms a cross (see my video) and 20 minutes after that, the paella is done – critical time, remember.

These are some curiosities that I found very interesting and are worth learning from the local people.

Our university presented the most traditional type of paella. Let’s look at the diverse versions in the other teams.

Eventhough our paella did not win, I think we enjoyed the time very much, we learned new things and I am sure going to participate in the rest of activities organized by Campus Life!