Home On fire My first Fallas in Valencia: Mascletà

I don’t think I’ve ever been this eager to share anything Valencia-related so far. On Friday 1st March, the Fallas celebrations started. The following day, I went to my first Mascletà on the Plaça de l’Ajuntament. I was not sure what to expect; I only knew it was some sort of fireworks in broad daylight and that it was going to be noisy. Needless to say that I did not have my hopes up then. I was so wrong.

Mascletà: one of the major events of Fallas

I knew a Mascletà was a thing when my friend and I tried to get on the metro at Burjassot station and had never found it so crowded. We also heard French around us. For the first time since I’m in Valencia, I was in a crowded metro, with people speaking French. That bore some resemblance to home. To be honest, the Parisian metro is not something I miss. But that confirmed one thing: during Fallas, Valencia attracts many tourists; and rightfully so.

We went out and realized that we wouldn’t have trouble finding our way. It was incredible. People were flooding the streets and we had to make our way through the crowd. We saw some women wearing the traditional Fallas dresses; we saw more of them having the Fallas hairstyle. Then, the wait began. 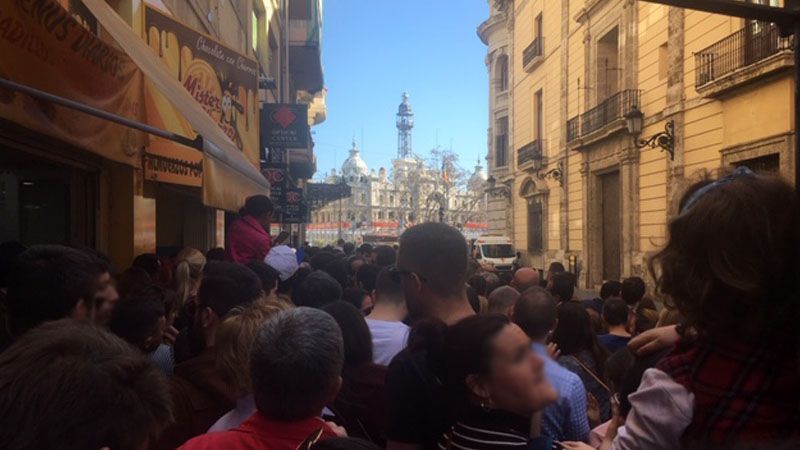 It’s all about feeling it

I discovered there was some sort of countdown. 10 minutes before the beginning of Mascletà, there was the first gunpowder shot, which was really loud. I truly did not expect it, and it resulted in me jumping. As 2pm was drawing near, a feeling of fear and eagerness started to rise in me.

Finally, it started. I tried to take a video for my family, but it was completely useless. The whole point of a Mascletà, I discovered, was to feel; not to see or hear. It was some sort of fireworks, indeed. Shots in the air and an explosion. The major difference with “normal” fireworks was how close we were to it.

Explaining what a Mascletà is can be really difficult, it is just like a concert of gunpowder!

The ground was shaking, the crowd was cheering. I was in awe, literally. It was fascination, a mix between fear and amazement. I could not help but smile. It was like taking a roller-coaster, when you’re so afraid you laugh, when something just seize you and you can’t help it.

The shots echoed and resonated within all of us. It was so powerful we were mesmerised. We saw the smoke, the light of the fired shots; we smelled the gunpowder. 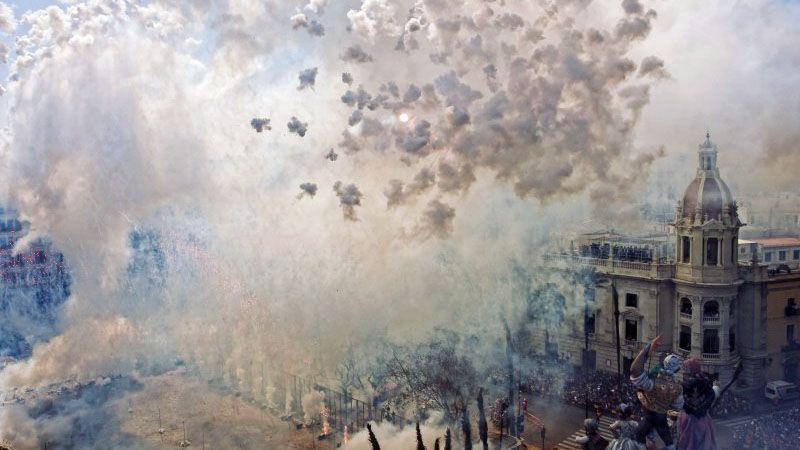 The grande finale was incredible. Multiple shots, stroboscopic lights, and a ground-breaking roar. This is was war must be like, I thought. The crowd was applauding and cheering in the smoke. It ended and we were all cheering.

Why you should go to a Mascletà

My friend and I just kept on repeating how insane it was and both wanted to come back to live it again. This was no ordinary show.

Indeed, what is different with Mascletà from a traditional firework is how close you are to the shots. This makes you feel the explosions, which was perfect for me because I’m rather short and could not see much of what was happening.

In a nutshell: you ought to experience it. I don’t think my words are enough to describe how it feels. My family is coming for Fallas, and when I told them about Mascletà being “more or less fireworks, but in daylight” they just didn’t seem that eager to go. I’ll take them, that’s for sure!

If you haven’t been to a Mascletà yet, don’t worry! It is every day at 2pm at the Plaça de l’Ajuntament, until the 19th of March!

My first « Fallas » as an international student : Chills and emotions guaranteed !

The CEU-UCH University Language Service organised a walking tour of the...