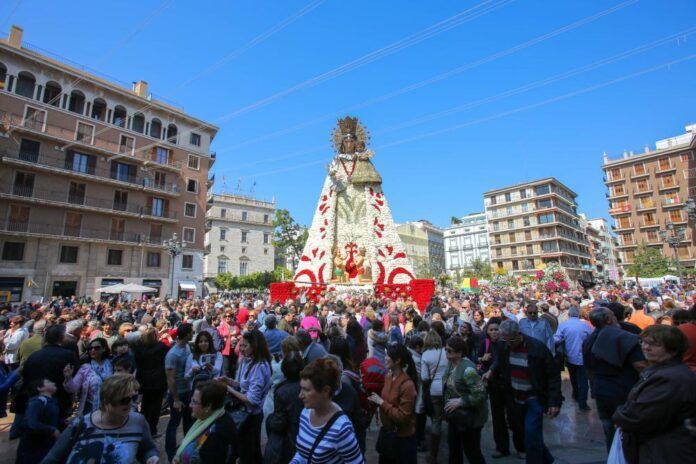 Welcome back to the ordinary routine! Have you ever heard about the Post-Fallas syndrome? That is when the Fallas festival ends, you may miss churros and buñuelos with chocolate; you miss the beautiful and colourful appearance of the city; the mascletà at 2 p.m. or the fireworks at midnight in Alameda. I have just reminded you about it again, right? Let’s look back at some of the highlights we have experienced during March, thank you to Falla Na Jordana and Campus Life at CEU Valencia for making us discover the beauty of the Fallas! 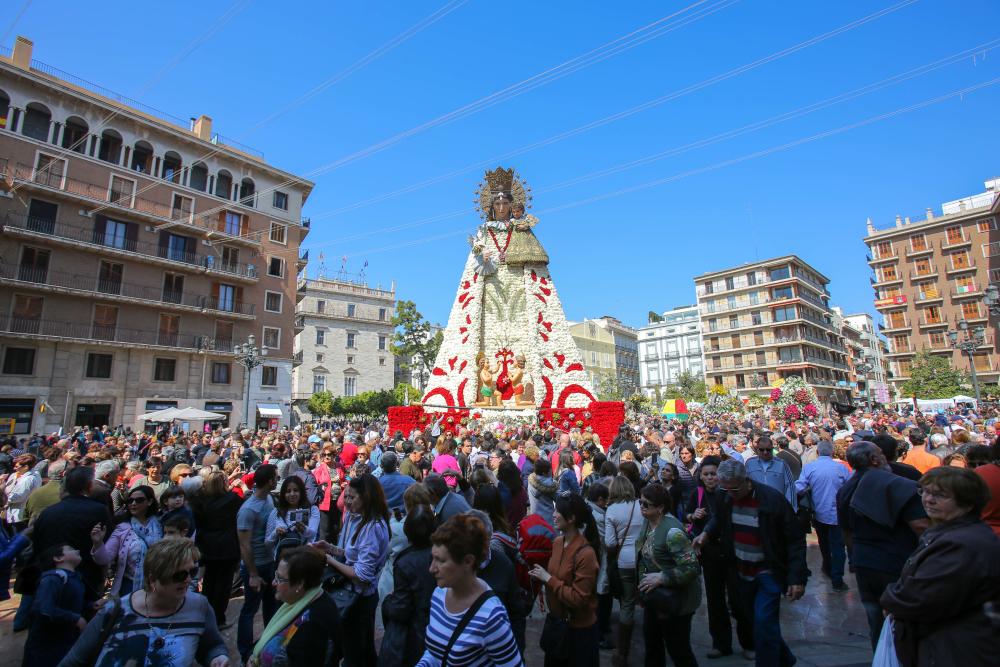 I will recall that it consists of a small pilgrimage, from either San Vicente or La Paz streets to the Plaza de la Virgen, carrying a bouquet or ram of carnations, roses or tulips. A figure of the Virgen de los Desamparados (Our Lady of the Abandoned) is installed, made of wood so that the bouquets of flowers are placed on the empty shelves. 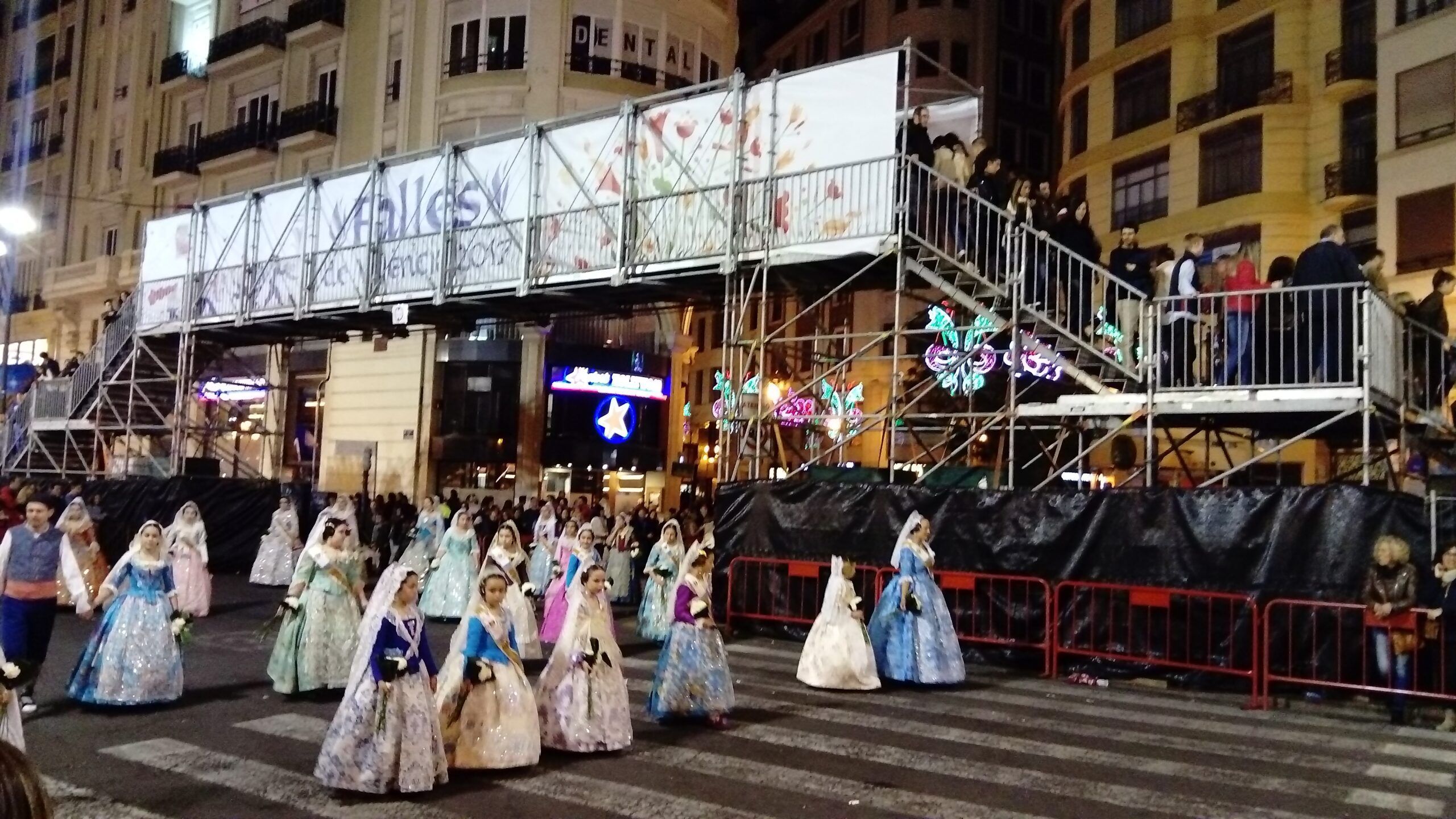 Fallas 2017 marks the 75th anniversary of this very cultural ceremony. Therefore, all former Falleras Mayores (Fallas queens) had the honour of being the first ones to offer the flowers. Especially, the Fallas queen in 1955 who said: ‘Today I feel a great joy, and I have many memories. I’m going to ask her (The Virgin) to give us a lot of work, a lot of joy to live, that we continue to be very passionate about Fallas’. During two days, more than 400 commissions participated, with their alluring costumes and music from the traditional instruments tabal (drum) and dolçaina (clarinet) which made tourists, as well as local people, spend hours watching them.

La Nit del Foc is a fireworks display that marks the beginning of the last day of Fallas. Attending this event is a must because of the gunpowder, light and colour in the dawn of Sunday, March 19 at 1:30 a.m. You can enjoy the Nit del Foc at the Palau de Les Arts (but you have to pay), however, in my opinion, I would recommend seeing it from the Aragon bridge. It lasted 20 minutes and you have to be there to hear, to see, and to feel each beat of the fireworks.

The Fallas figures are established from March 15th and by March 16th, they are all done and ready to compete. The name of each figure normally will be addressed according to the intersection of two streets or if it is a bigger one, the name of the district itself. To be honest, it is an impossible mission to visit all the Fallas figures, but it is a good idea to try to see as many figures as you can and figure the sarcasm idea behind it. Another suggestion is to follow a route of the best Fallas after the announcement of the prizes. Be sure to include a visit to Falla Na Jordana, one of the big names and definitely one of the most popular among the valencianos for its interesting blend of tradition and modern values!

This year, in the child section the winner was Convento Jerusalén, while L’Antiga de Campanar received the 1st place in the adult section.

In the night of March 19th, all Fallas figures are burnt, which turns the city into a mass of fire and smoke. The last monuments to be set on fire are the ones in front of the town hall, at 1 a.m. and the ceremony is accompanied by aerial fires launched by the pyrotechnics Hermanos Caballer, marking the ending of the festival. As we can expect, it is also the countdown for the Fallas 2018! 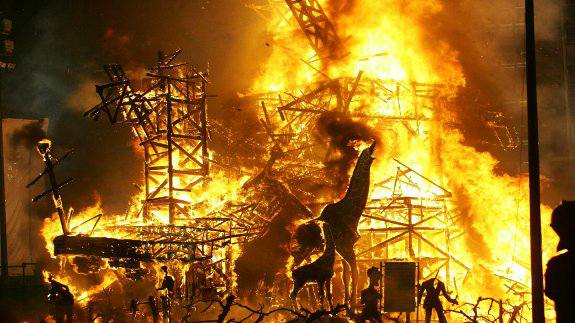 There are more activities in the center that you might know: Verbenas and discomóviles (Night street parties); light shows in Russafa district – especially at street Cuba-Literato Azorín, which again got the first prize this year; you have probably eaten food from the many food trucks, or saw bullfights at the bullring.

I think this festival is a proof of the maintenance of culture trait and it deserved to be, officially this year, included on the Cultural Heritage list by the UNESCO.

Fallas 2018 are already on their way so, if you too want to experience this UNIQUE festival next year, be sure to keep an eye on the On Fire program the university launches every year: they will guide you throughout the whole festival and invite you to behind-the-scenes events at no cost. Way to go #NaJordanaCEU!