Home Our Students Getting lost in Moscow, Europe’s largest city

Nahuel Miranda De Armas is one of three students from CEU Valencia who has paved the way to Russia, as a result of the launch of an agreement which, this year, for the first time, has allowed us to organise Erasmus exchanges there. Their experiences could not have been better: everyone has extended their time there. Nahuel tells us in person what these months have been like. 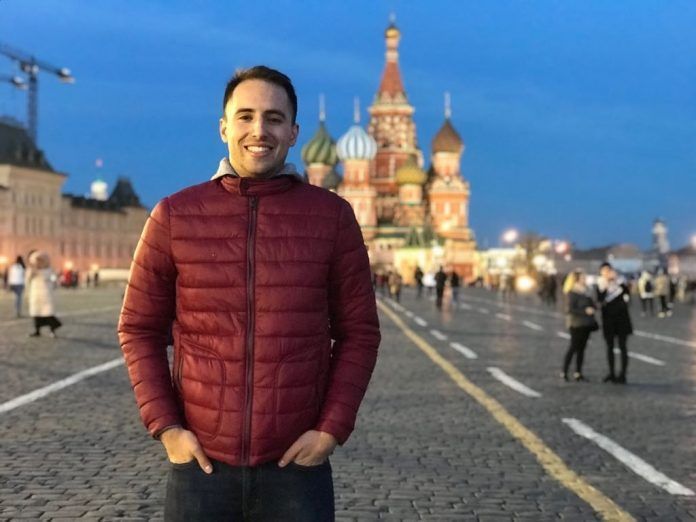 Hello everyone! My name is Nahuel and I study Journalism at University CEU Cardenal Herrera. To begin with, I must say that choosing an Erasmus destination is a critical decision in the life of a twenty-year-old. Choosing a destination for a whole year that can be a turning point. And by choosing Moscow, I didn’t do things by half measures. I wanted to see what I was capable of and I found a big challenge. I would lose myself amongst 12 million people in the largest city in Europe.

“There we almost 7,500 students from more countries than I can remember”

I thought it would be amazing to go to Moscow State University. It’s the largest in Russia, and it’s perhaps the only university on the face of the earth located in a skyscraper. When they told me that I was going to live in one of the Seven Sisters for the year, I could not refuse the offer. The Seven Sisters are seven buildings with imposing facades that Stalin had built to show “the greatness of the USSR”. I was looking for a cultural impact and I was going to get it.

In an international environment within the most culturally hermetic country that I have ever known, I was able to study for my degree in English with exemplary teachers from all over Europe. Meanwhile, I learned a language that opens many doors for you – Russian.

You could not expect any less from a university founded by Mikhail Lomonosov, a kind of Russian Da Vinci who grew up in the care of Peter the Great and designed the plans for the first university buildings. It is truly a place summarised by greatness all over the place.

To top it all, some of the most illustrious writers in the country have come from the Faculty of Journalism. The headquarters, where all classes took place, is just 400 meters from the Kremlin and Red Square, the most imposing place you can imagine.

You can feel isolated in the middle of a city and an institution of this scale. Nothing could be further from the truth. In the main residence there are about 7,500 students from more countries than I can remember. Around the university, there is a nature reserve that embraces the campus and most of the faculties. University life, as it could not be otherwise, was buoyant. Dozens of student associations organized meetings of all kinds so that the transition was smoother and we created groups to share such an experience with.

Living abroad and departing on your own for such a different country has been hard, of course. Each person will have their challenges and I have been able to fulfil several of my own. But the reward was worth it.

“Always with you”, a letter from an Erasmus+ student in Brno

Erasmus+ in Lisbon, the best year of my life