Home Our Students Erasmus+ in Lisbon, the best year of my life

Lisbon, I have nothing, but positive words, to say about you and my Erasmus+ experience…

It was the first of September of 2018 and, after an endless night in a train, I arrived in the Portuguese capital. I immediately caught a taxi, which took me to the place which was to be my home for the next 10 months. I would not be an exaggeration to say that just the very next day I made my first friendships there. Every night we met in Bairro Alto to to enjoy its atmosphere and have some very cheap drinks.

My flatmates became my family and it seemed as if people I had met only several days before had been my lifelong friends. We were all equal, we were all starting from the scratch. We shared great moments: from unforgettable nights to incredible travels, on which I will comment later on.

When it comes to the university, I studied at Universidade Católica Portuguesa (Catholic University of Portugal), which was about a half-hour drive by public transport from my house. Coming there was as easy as having the monthly transport card (there is a discount if you are younger than 23), having the will to get up when the alarm rings… and a good coffee, a good coffee is always helpful in the morning.

My schedules varied: from days when I had 3 hours of classes to days I had 8. The majority of the classes involved active participation: we debated, proposed ideas etc. The protagonists were we: students. The evaluation method was simple; a small percentage for active participation and attendance and the rest of the percentages was divided into two exams, one in the middle of the semester and the other at the end. My grades were pretty good and I was able to take an advantage of a make-up exam session to enjoy Portugal. 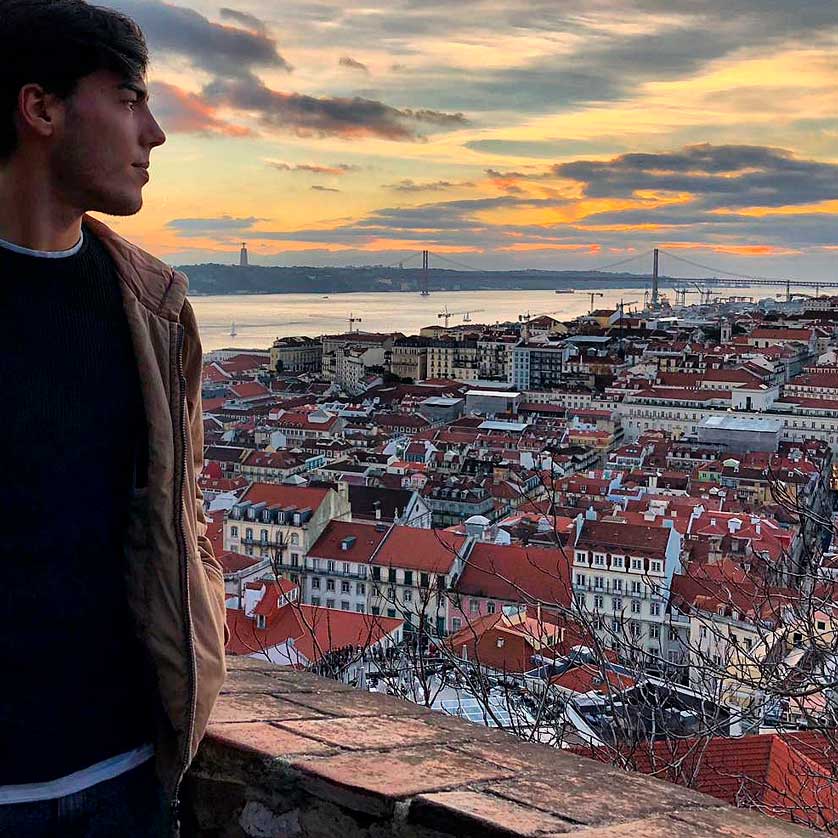 Well, it is true that the university is not big. However, it has everything you need. It is student-friendly and its employees always do their best to help students. It consists of two faculties and a building in which a library and an auditorium are located. In the center, between the buildings there is a garden that always offers sun. In the days of good weather, everyone was looking for a place to relax. When it was cold or rainy, we just headed to the canteen.

Turning to Lisbon, how beautiful is the Augusta river with its views on the Tagus, the castle at the top of the city protecting it with its tiled floor or its slopes in every corner, not to mention Sintra, the land of castles and colours, which is the first thing my friends who visit me need to see, they could not leave Lisbon without seeing it. Another must-see site was the Belem Tower, just three train stops from Cais de Sodré. It is said that you cannot leave Lisbon before trying Belem’s cupcakes and there is no better place to try them than in Belem itself, which is famous for making the best Belem cupcakes. Honestly, I do not like them very much, but I must be a weirdo, because whoever tries them, eats them again and usually takes some for family and friends.

“Lisbon, you gave me the best year of my life and I will be never grateful enough to you.”

My routine included: meeting friends, going out, going to the beach in Cascais by train. Having fun. A simple plan for an afternoon was to sit by the river with something cool and let the hours go by talking and talking: there were always some stories to tell. A plan for night was to have dinner in a typical Portuguese restaurant (dinner does not cost more than € 6/7 if you escape from the tourist sites) and then to one of our three favorite places: Bairro Alto, on which I have commented previously, Lisboa Rio, a nightclub which we considered our place and finally, Urban Beach, a super nice, giant nightclub on the river bank playing all kinds of music.

I made three unforgettable trips with the same friends. The first one was to Algarve. Sun, beach, friends, fun… there is no need to say anything more, this trip made us even more united than we were before. The second one was to Coimbra. To be honest, you can see the entire city in a half of a day and there is nothing highly exceptional, but at night you can feel the atmosphere of an academic city there. During the day families walk or have a coffee on a terrace there, but at night the streets of Coimbra filled with people who were having fun, dancing and drinking. Finally, one of the most beautiful places I’ve visited in my whole life, Azores. We managed to book a fairly cheap flight to Ponta Delgada (which, by the way, we almost missed) and there we went. It was so distinct from everything else as if it was on a different planet, nature at its purest. Highly recommendable, an underestimated wonder. Just bear in mind that renting a car is absolutely a must.

In a nutshell, no matter how much I wrote about you, dear Lisbon, I would not be able to depict your beauty. You gave me the best year of my life and I will be never grateful enough to you. You taught me the meaning of: “saudade”, the word which means something similar to longing, but is difficult to translate to English.

“Always with you”, a letter from an Erasmus+ student in Brno

Ana Julia, on Journalism: “It is all about passion”