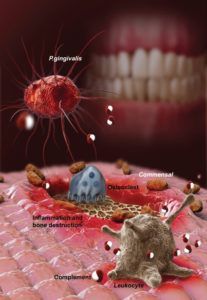 Periodontitis can be described as a common inflammatory and infectious disease that will lead to the destruction of the main structures that support the tooth and, if untreated, can also lead to the loss of the tooth itself. This destructive mechanism is mainly related to the formation of a complex and thick biofilm that has been formed by many bacteria that attach to the surface of the tooth. This situation must be kept under control because it might lead to more serious complications such as: bacterial shifts (spread of the bacteria in different areas), dysbiosis (mechanism related to microbial imbalance or maladaptation) and transition from gingivitis to periodontitis may also occur.

WHAT LIMITATES THE MICROBIAL EFFECT: BENEFITS VERSUS RISKS

Nowadays the prescription of different antibiotics is the best option. In particular, the combination of systemically administrated amoxicillin (AMX) and metronidazole (MTZ) has been frequently chosen for the non-operative periodontal therapy. AMX is a bacteriolytical lactame-antibiotic with a wide spectrum and a half-life of 1 to 1.5 hours and MTZ is especially effective against anaerobes and protozoa with a half-life of 6 to 7 hours. Nevertheless, the effectiveness of this combination is strongly limited by its side effects such as: potential drawbacks of this regimen and problems with the compliance. These problems led to an ongoing search for alternatives.

HAVE WE FOUND ANY ALTERNATIVES TO SOLVE THE PROBLEM?

Azithromycin (AZM), a macrolide antibiotic extensively used in general medicine, has recently found its niche in periodontal therapy as well and has been proposed as a possible alternative. This antibiotic is interesting for periodontal therapy due to several potential benefits, including a broad antimicrobial spectrum, anti-inflammatory activity, a lower intake dosage and duration/frequency of intake.  Furthermore, recent systematic review found clear evidence for AZM as a second alternative to the combination of AMX + MTZ in chronic periodontitis patients.

SO… WHAT TREATMENT IS BETTER?

In order to answer this question many literature searches have been performed. The data collected up to and including 29 March 2018, come from studies that matched the PRISMA (Preferred Reporting Items for Systematic Reviews and Meta-Analyses) guidelines for systematic reviews. At the end of the comparative process three publications have been included in the systematic analysis. Many laboratory studies have been compared and their aim was to evaluate the antimicrobial efficacy in vitro of AMX + MTZ vs. AZM. These studies hypothesized that both antibiotic therapies were equally effective in eliminating in vitro the growth of bacteria associated with periodontal disease.

WHAT STUDIES HAVE BEEN MADE?

WHAT IS THE FINAL RESULT?

In conclusion, the combination of AMX + MTZ performed in 3 out of 3 studies better and seemed to have a higher antimicrobial efficacy in vitro as compared to AZM, further studies are required to evaluate the comparative laboratory susceptibility and, in particular, the clinical relevance of AZM.