The 2030 Agenda is a call to action from the United Nations to companies, governments and many other social agents. Coca-Cola has picked up the slack and made sustainability one of its principles. The brand chose to commit to the society in which it operates, as well as to the care and protection of the environment. Its Sustainability strategy covers the triple economic, environmental and social dimension. In order to design it, they were inspired by the 17 Sustainable Development Goals.

In 2017, Coca-Cola made public their commitment to Sustainability and set specific goals based on six transversal axes:

Between 2015 and 2020, the brand has reduced the use of sugar in its soft drinks by 12%. In addition, half of their products are already sugar-free or low-calorie. It has also made clearer the information on its packaging.

In addition, with the aim of not contributing to childhood obesity, Coca-Cola now avoids advertising targeted at children under 12 years of age.

The brand has established that 40% of the company’s managers should be women (currently the figure stands at 28%). They also work to increase employment among the younger population and encourage volunteering among their workers. In fact, they offer them a couple of days off a year so that they can participate in the volunteer project that interests them the most.

Coca-Cola has set out to reduce its water consumption by 20% by 2025. And return 100% of the water used to nature. In order to achieve this, they have implemented a series of projects around the country. One of them is the one carried out in the Albufera wetland in Valencia “El tancat de la Pipa”. Since 2013, they have planted more than 23,000 aquatic plants of different species that help filter and purify the water of the Albufera. 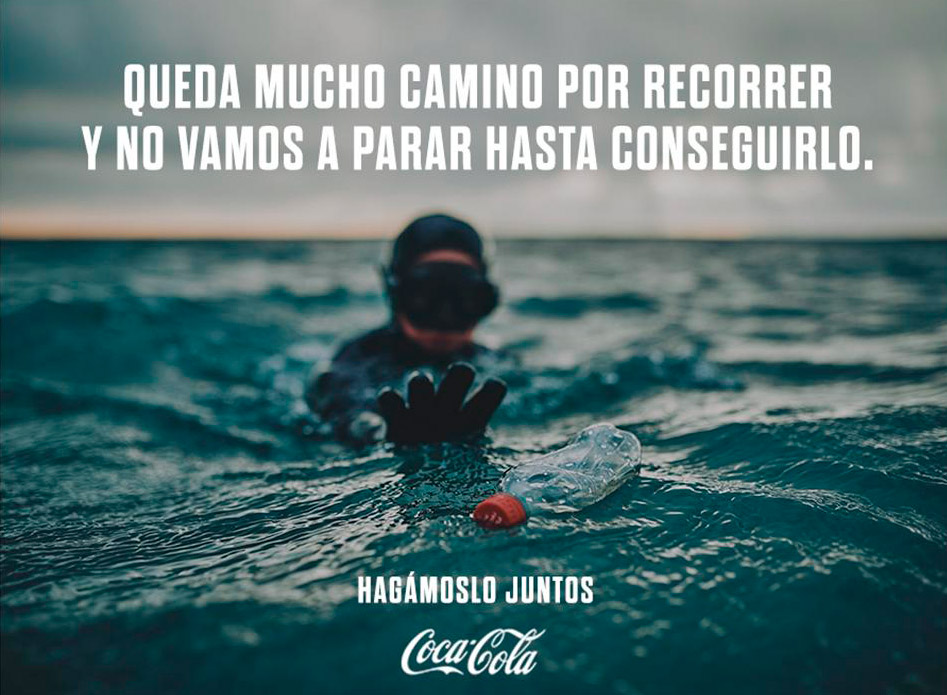 The brand has started “its way to 0”. Coca-Cola’s ambitious goal is to be carbon neutral by 2040. Currently, they are already using recycled plastics, more efficient cooling equipment, a fleet of electrical means of transport, fossil-free energy factories, etc.

In this transversal axis of its Sustainability strategy, Coca-Cola has set two specific objectives: to ensure that 100% of the raw materials come from sustainable resources, and to include Sustainability, ethics and respect for Human Rights in the supply chain.

Transforming the packaging into a more sustainable one is also one of Coca-Cola’s commitments. In order to do so, they are replacing the plastic rings that join cans with cardboard ones; straws and glasses are being replaced by reusable ones and 100% recyclable packaging is being used (in Spain 99.6% already).

Through communication, Coca-Cola tries to involve and educate the consumer. Some of the brand’s recent campaigns around Sustainability are the following:

Let’s do it together

The brand disseminates its Global Sustainability Strategy with this campaign. In fact, “Don’t buy from us if you’re not going to recycle us later” was the first advertisement in Spain that focused solely on promoting Sustainability:

The oceans are the lungs of the planet and fundamental to understanding climate change. It is estimated that by year 2050 there will be more plastics than fish in the oceans. The project “Mares Circulars”, is another of Coca-Cola’s initiatives.

The project is based on the slogan that, just as we are part of the problem, we can also be part of the solution.

Coca-Cola launched this project together with the Valencia Marathon in the year that commemorated the 20th anniversary of the race.

Both Coca-Cola and the Trinidad Alfonso Foundation thought that the Valencia marathon could be the first in the world to recycle each bottle into a new one. They strived to achieve a 100% sustainable event that would be a milestone in the world of running. Bottle by bottle was a pioneering initiative in Spain that sought to convey to citizens a message of commitment with the environment and circular economy.

With these and other actions, Coca-Cola shows its commitment to society and the environment.

Fernando Álvarez is Head of the Communication Department of Coca-Cola in the Valencian Community. He gave the talk “Coca-Cola Sustainability Strategy” within the framework of the event World Watchers promoted by the CEU Cardenal Herrera University.

The interview with Fernando Álvarez in Actualidad CEU is available here.

Just a little more creativity! The power of Packaging

Why you should study Advertising