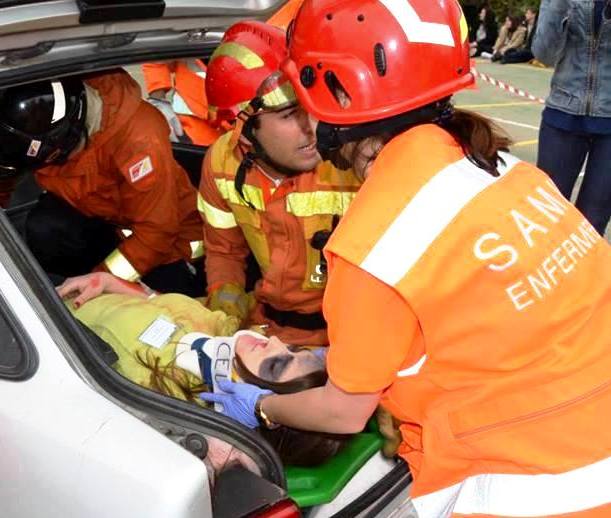 The University CEU Cardenal Herrera campuses of Elche, Castellón and Moncada (Valencia) have participated together in the Simulation of Accident of Multiple Victims (AMV) 2016 coordinated by Dr. Jose Vte Carmona Simarro.

At 08:00 on the 29th April 2016 the AMV activities started. A practical activity in which the students demonstrate what they have learnt in lectures, workshops and seminars, and they put into practice techniques and skills as if it were a real situation.

Without a doubt, the protagonists are the students, so each one of the “roles” that constituted the participants of the Simulation was carried out by them: from the Advanced Command Post (PMA) – Jaume – to Public Relations – Elisa -.

This year the students who participated were Master students of Nursing in their module II Urgencies, Emergencies and Catastrophes in Elche (coordinated by Maria Carmen Rocamora) and Moncada, Valencia (coordinated by Juan Jose Tirado and Jose Vte Carmona), Undergraduate Nursing students of Castellón and TES students (coordinated by professor Rafael Moret), Undergraduate students of different years of Nursing in Moncada, Valencia, volunteers of Civil Protection in Torrente, Master professors from the campuses of Elche, Castellón and Valencia, and professional firefighters, who have demonstrated to us once again, the high qualification that they have: many thanks Rubén and Ismael.

Also, members of the 1st Military Police Battalion of Bétera visited us and they work within the Master activities, a session at their base.
The planted scenario was a road accident that involved a bus, two cars and a motorbike: in total around 20 victims of different severities that the first responders had to “label”: green, yellow, red or black.

The victims wore make up to show their state and they realistically played their role: Ana Olmos and Ana Cristina Ramos were in charge of the make up this year –spectacular-.

CECOVA Televisión ─Amparo─, Ana Salvador ─CEU─ and the coordinator Dr. Tirado, were the people responsible for capturing this event with photos and videos. Each year we try to exceed ourselves and we proposed that the mobile hospital psychologist treated the non-physical problems/alterations, of the victims on the premises: the student Marc Palanca played his part inside out beforehand, searching for specific protocols for this type of event so he could practise with the victims who required it.

From here we thank the work of all the professionals of the University who have worked indirectly to be able to carry out this event and the patience that they have had with me: the Postgraduate Unit (Helena Lozano), Secretary of the Nursing Degree (Eva), Heritage Service (Miguel and his colleagues), Administration (Pilar), Sports (Javier), Laboratories/Material (José Antonio), forgive me if I have forgotten anyone. Many thanks to you all.

Why is Spain an excellent place to study Nursing and improve your employability across the world?

Innovation, digital culture and data-driven decisions. Towards a digital transformation.

Help me please: save lives