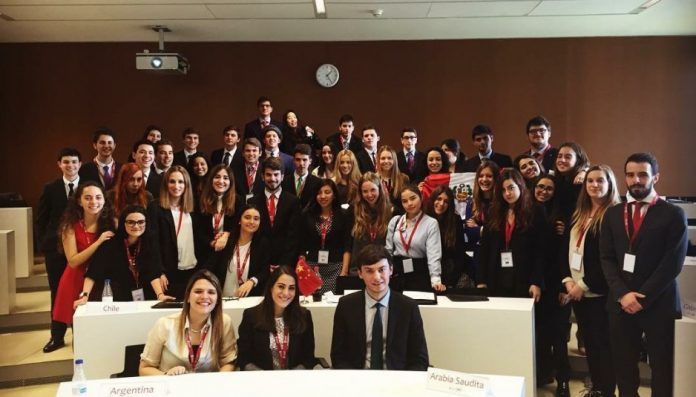 Students of degrees of Law, ADE, Political Science, Marketing and Communication represented the University CEU Cardenal Herrera in the fifth edition of UNMUN, organized by the University of Navarra. This has been one of the projects of the Model of United Nations CEU Club, led by Zitan Peng y Noelia Puchol.

UNMUN is an activity which emulates the work of the United Nations in various committees that are integral to the international organization with the intention to educate and train students on the topics of international scope that addresses the UN.

The students could represent each one of the committees that is within the United Nations General Assembly, such as Committee of Crisis, Security Council, ECOSOC, DISEC and UNHRC. This year, as a novelty, the General Assembly and DISEC came together and discussed the following topics; “The rights of girls: education and girl brides” and “Non-State Military Organizations”. Isabel Wenyi, a student of Marketing and ADE represented Syria in this debate; Noelia Puchol, student of Law represented Spain; Camila Mariño, double degree student of Law and Political Science represented Germany; Silvia Palomino, Student of Communication represented Ireland; Carmen Vera of Political Science and Law represented Vietnam and Ana Ferrandis representing Saudi Arabia and studying a double degree in Law and Political Science at UCH CEU were the students who joined the committee.

Marta Usó, doble degree student of Law and Political Science and María Tormo, of Law participated in the Committee of Crisis, which in this edition discussed about the Crisis of the Cuba Missiles, from the point of view of the Russian Cabinet. Here, each of the participants recreated a character that was historically involved in the Russian Crisis.

Two students, Zitan Peng, student of Law and a student of Political science Álvaro Bombal, participated in the Security Council, the first represented China in the UNO and the second represented the United Kingdom. This Committee has the responsibility primarily of maintaining peace and security internationally; hence the students had to get under the skin of the delegates to defend the interest of different states.

The students also enjoyed various recreational activities where all participants came together, expanded their contacts and made new friends. This session was very productive as it further expanded the knowledge of the students about the UN and other Models which take place in other universities of Spain.

Let’s go to New York and talk things out!

Do you know the MUN club?

Past Experiences of MUNs