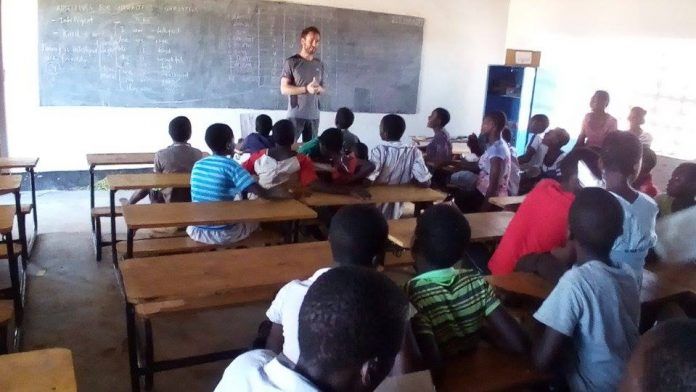 This year I had the opportunity to join the journey by the group of the Faculty of Veterinary “Vets for Africa” to Benga, Malawi. The Catholic mission established in the same town is working with three schools, we had the chance to visit one of their centers and attend classes. 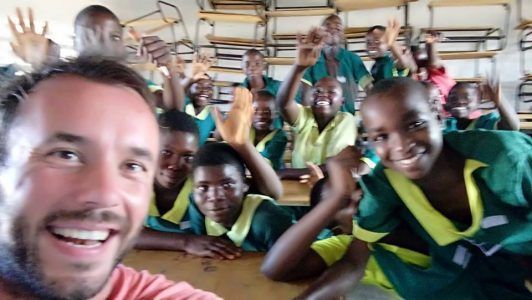 The first day, Monday, I met the principal of the school, who then introduced me to the rest of the teachers. After sharing information about our centers, the director told me about the main problems they face every day: the lack of material and economic resources, the limited number of classrooms and teachers available, the high number of students, school absenteeism and the little involvement of parents. In short: 1,500 students, 8 classrooms and 8 teachers. When he finished, he showed me the schedule and we planned the rest of the week and the classes that I would teach. We decided that it was best to teach Standard 5, 6, 7 and 8 students, whose ages ranged from 10 to 16 years, because with them I could communicate better in English.

During the rest of the week I gave classes (mainly English, but also other subjects, like Social Sciences, Like Skills, Arts and Sports, Mathematics or Science and Technology) to the four groups. The students’ English level was lower than I had been told, and they did not have any kind of material, except for a pen for one in four students. At first the communication was not very fluent, but the good predisposition of the students improved it immediately, and thanks to the repetition and the use of body language and drawings on the blackboard, we managed to understand each other right away.

I had brought several games and exercises from Spain that we could use, regulating the difficulty according to the class level. Among them were vocabulary cards, colored and sticky cards, or a ball that was used to practice simple sentences in English. None of the students had ever seen most of the objects that were given to them, which visibly increased their level of motivation, making learning more productive. 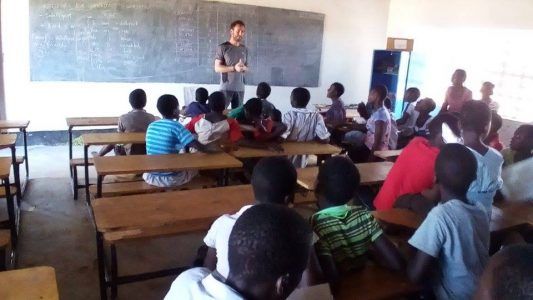 Over the course of the week I was lucky enough to talk to natives and ask them about different aspects of education in the country. In such a different social context, there were many things that surprised me. No doubt one of them was their way of dealing with diseases. For them, including teachers, AIDS is a taboo subject, and most people prefer not to even mention it. This fact gives us an idea of the lack of information that exists in these places, something that could be improved through informative talks on preventive methods and causes of diseases like this one. It is worth noting that Malawi is the 9th country in the world with the highest rates of AIDS.

To finish the week in Mkhula I said goodbye to the students with a baseball game – after explaining the rules of the sport. They had a lot of fun and promised that they would continue practicing it with the cones and balls that I left there. I also wanted to meet with the teachers to exchange opinions, to ask them about their needs and difficulties, and to tell them what my impression had been but, above all, to thank them for their warm welcome.

As for life outside of school, what struck me the most was undoubtedly the good harmony that prevails in the country, the kindness of its people, and the way children smile. On the last day I was lucky enough to witness a local religious ceremony: listening to them singing and watching them dance in the middle of nature was a real privilege.

Putting aside the incomparable experience that this meant for me on a personal level, I feel a great satisfaction for the work done. While it is true that there is consternation about the reality lived there, one can also feel that both students and teachers are eager to improve the situation.
In my opinion, much remains to be done, but small projects like this one can lead to major changes.

International volunteering: what happens when I come home?

Do more than just study: do something that will change your life ❤