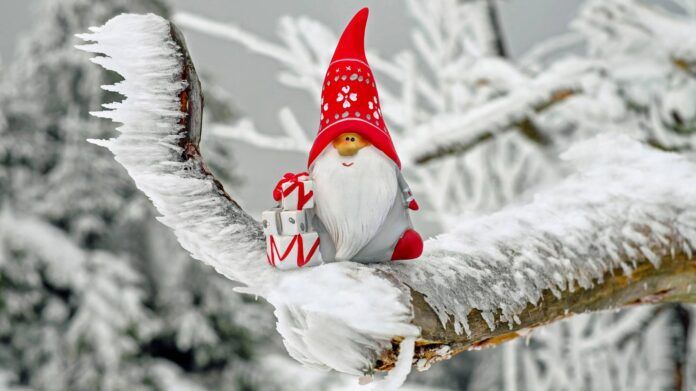 Many of us have Christmas traditions, for example here in Spain most homes set up Nacimientos or Belenes — the Spanish word for Bethelhem. It’s a nativity scene of art objects used to represent the birth of Jesus. Studying in an international environment at CEU Valencia will definitely open your eyes to a variety of cultural differences and festivities. It’s super intriguing to meet students from so many different countries around the world and see how different our Christmas traditions are!

Ana from Switzerland tells us that Samichlaus (Santa Claus in the German-speaking parts of Switzerland) and his helper Schmutzli visit children on December 6th. In her case, they would visit her school too so that Ana and her classmates could recite poems. The well-behaved children were given chocolates, gingerbread, peanuts and mandarins. They also do parades across the country where they give out these same things for everyone to share.

Martine from Norway decorates her Christmas tree every 23rd of December as well as watch Grevinnen og Hovmesteren. The following day, on the 24th she opens her stocking to reveal marzipan, mandarins and chocolates. They then as a family watch a Ukrainian movie called Tre nøtter til askepot. After the movie, they visit the graveyards of their loved ones to gift flowers, as well as Christmas decorations which include pine and candles to commemorate them and rejoice.

Ribbe is a traditional pork dish eaten on Christmas eve, finished by Riskrem, a sweet cold porridge topped with a red sauce. The lucky one who discovers an almond in their dessert wins a pig shaped marzipan!

Prisca, a French classmate celebrates Christmas at her grandparents’ house in Brussels, in which she explains looks a lot like the movies. Streets are filled with Christmas décor and lights, Christmas trees at every roundabout, and Bélens are commonly seen at church doors. Every year her parents take her and her siblings to the city center, where the true magic of Christmas is experienced. A light show begins every hour accompanied by special Christmas tunes and last-minute holiday shopping is done at the Christmas market. Waffles and hot chocolate are a great way to warm up while enjoying all of the festivities Brussels has to offer!

Yellow is for good luck in Ecuador

Architecture student Francisco told us that in his home country Ecuador Christmas kicks off early in December with Christmas dinners among friends. They play a game called amigo secreto, during which you give presents to a friend in secret for a week or so. On the day of the Christmas dinner, the final presents are given and the secret friends revealed. On Christmas Eve there is a Christmas mass which people usually attend with their family. A popular Ecuadorian Christmas treat is pan de pascua, a cake-like dessert with chips of fruit and chocolate inside.

Francisco commented that the Ecuadorian New Year’s Eve celebrations remind him of the Valencian festival Las Fallas: “For New Year’s Eve, we do something similar to Las Fallas festival in Valencia. There are dolls made to resemble cartoon characters, soccer players, politicians, and other public figures, and at midnight they are burned. It symbolises leaving the bad things of the year behind. At midnight we eat the Twelve Lucky Grapes like here in Spain and drink a glass of champagne with something golden in it. But we don’t wear the red underwear, we wear yellow to bring good luck — and also run around with a suitcase, to bring travels for the new year.”

Sinterklaas, the Dutchie who brings presents!

Two Dutch friends Danielle and Celine told us that in the Netherlands Saint Nicholas, or Sinterklaas, is celebrated before Christmas on the 5th of December:

“Sinterklaas is a bit like Santa Claus as he gives out presents. The story goes that he comes from Spain on a boat with his helper Zwarte Piet, and the children are warned that if they don’t behave well Sinterklaas will take them to Spain in his bag! He arrives in November, visiting every village and giving to the kids. Then the children leave their shoes in the hallway or next to the fireplace, and up until the 5th of December they receive gifts. On the 5th there are celebrations with more presents, and on the next day Sinterklaas returns to Spain.”

In the Netherlands it is also important to get together with the family during Christmas. Celine explained that it is a family tradition to watch certain TV programmes and to enjoy the Christmas dinner and gift-giving together. Danielle normally travelled to the United Kingdom with her family to spend the Christmas with her grandma where they enjoyed a traditional British Christmas meal with Yorkshire pudding, vegetables, turkey or pork with cranberry sauce, topped with Christmas crackers, mince pies, and more.

Christmas is an event celebrated in many places around the world and some have a very particular way to do it: how do you celebrate it in your home country?