Happy New Year! On 19th February took place the International Spring Festival. Students and teachers alike came to CEU Valencia’s Hub to celebrate the year of the pig and discover Chinese culture. Among workshops, Chinese food and discussions about cultural differences, the event was the occasion to see how international the university is. 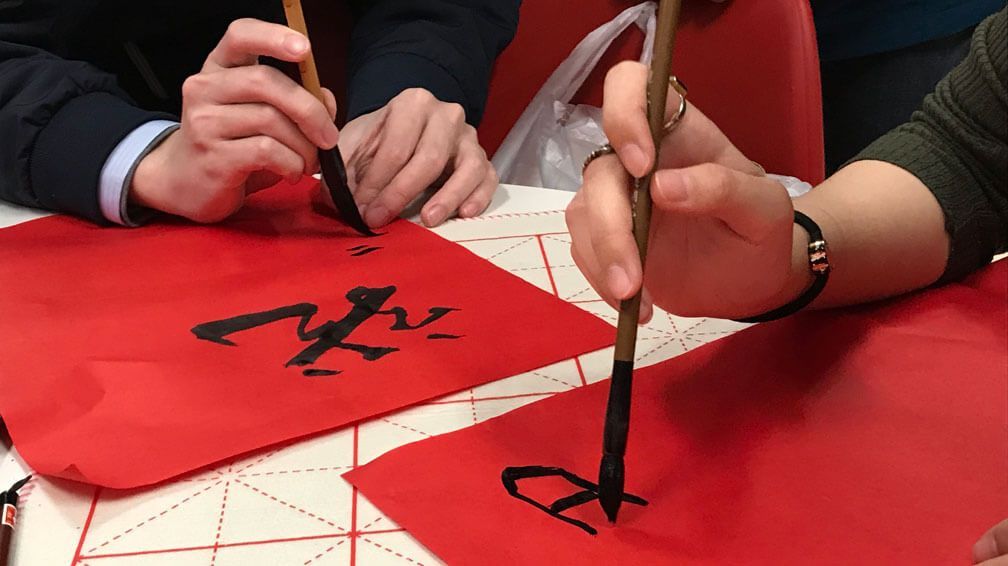 Our International Spring Festival started with CEU’s Chinese teacher telling us about the traditional way of celebrating New Year’s Eve in China. We learned about food, customs, and students got to share their own Christmas and New Years’ stories while traditional Chinese music was playing in the background.

One fun fact particularly struck us. In China, you can rent a boyfriend or a girlfriend for New Year dinner. It is because if you are single for too many years, your family starts worrying. Bringing a guest with you does the trick!

Then, the Chinese professor brought ink, brushes and red paper and started translating names into Chinese characters. Some students and teachers tried as well to take up the brush, ink it and write. Finally, wishes for this new year were hung on a flower composition in the Hub.

The benefits of studying at an international university

This New Year celebration was also the occasion to meet with international students. Peng Tzu Huang, “Chienny” is a Taiwanese dentistry student here at CEU Valencia. When she asks me where I’m from and answers France, she starts speaking French! As she sees I am amazed, she explains: “I was studying in Canada before, so I took French lessons there.”

Peng Tzu Huang takes free Spanish courses here at CEU Valencia. She is A1 level for now but yearns to be fluent. Her goal is to be B2 level when she’s a third-year student. “In Canada, there were many Chinese people” she explains. “I came here because it was a more international university”.

And indeed, as I talk with her friends, they all are confident that Valencia is a great place to learn Spanish, mostly because the locals don’t speak that much English. “We went to Madrid and Barcelona, and when we asked our way, a woman answered in perfect English!”

Bringing back the fun in learning languages

As we are in awe in front of the inked characters, a large group enters the room. Noel, an English teacher, chose to leave the classroom to bring his students at the Hub. He gave them a mission: find one interesting thing about China. But really, that was an excuse he made for other purposes.

To him, having events where his students can see the advantages of speaking English is considered a great asset. “Languages can be boring to learn” he states. “Here, there are Taiwanese and Chinese people. My students will have to speak English!”

In the end, his students took interest in the session and, as predicted, spoke English. Objective attained, Noel! As they were reluctant on leaving, he laughed and said: “You didn’t want to come, and now you don’t want to go!”

It was time to leave the Hub, redecorated in red. There were not only Chinese characters on the sheets but also drawings: pigs, lotus, and other flowers. We had all learned much here about Chinese culture, language, and writing in this afternoon. But somehow we also learned about Spanish and English. I guess that’s what it means to be an international university. Gong xi fa cai (Happy New Year)!