Home Our students Meet Eirin, a first-year student of Pharmacy from Norway 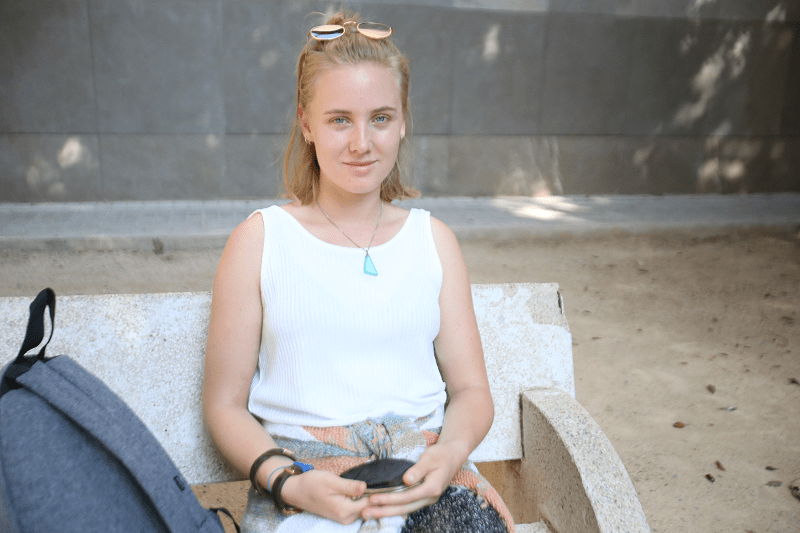 “In general, something that I like about studying at a university is that you set everything up yourself, and you can decide for yourself. I kind of consider school to be my job. I like that mentality.”

Hello, Eirin! Tell us about yourself! Where do you come from, and what do you study?

My name is Eirin Elde Carlsen. I am from Norway, from Northern Europe, where it is cold compared to here! I am 21 years old, so I had two gap years after finishing high school. I was a bit sick of school so I took some time off. And then I decided to come here, just this August actually! I study Pharmacy.

What do you do on your freetime? Do you have hobbies?

On my free time I like to be active. I like to run, I like yoga… And swimming. Otherwise I like to be creative, to do my own thing. And of course, now that it is a new school year, a new school, and lots of new people, it is fun to get together and go out. That is basically what I do, and then of course I study!

You mentioned having taken two gap years. What did you do during that time? Did you travel?

Yes, I went to South-Africa. I went there with my friend after the school ended. First we were going to do volunteer work: nothing organized or anything, we just found this person who was willing to take us in. But that didn’t work out, so we went to a backpackers’ hostel instead. We worked in the bar and the reception there and met lots of people. And then I started living there, up until four months ago when I moved back to Norway, and then I came here.

Was this previous experience abroad something that also encouraged you to come here?

It definitely made me tougher, I had to take care of myself. I think it would have been a bigger deal to come here if I hadn’t done it before. It definitely taught me something! Basically, no matter what you do, it is going to be okay: it is not going to be the end of the world if you fail or get lost.

You come from Norway! How has your experience living in Valencia been so far? Is it very different from life in Norway? For example, did you experience a culture shock coming here?

Valencia is very lively, the people are very friendly and outgoing, and they love to party. Don’t get me wrong, Norwegians like to party, too, but in a different way!

I think that a part of going to a new country is that you just have to accept the differences. You cannot always just compare it to your own country, you have to take it as it is.

I haven’t had a culture shock, but some things are different. For example, when I got here I was not used to people kissing you on the cheek, so I was a little bit confused in the beginning when people wanted to kiss me. But I got used to it quite quickly! Otherwise, it is just the language that is a bit of a shock. In the beginning, when I was by myself and I was trying to find the university, I realized that nobody spoke a word of English! Which was understandable — it is Spain — but I thought maybe they would speak it a little bit. That has been probably the biggest shock, I think. 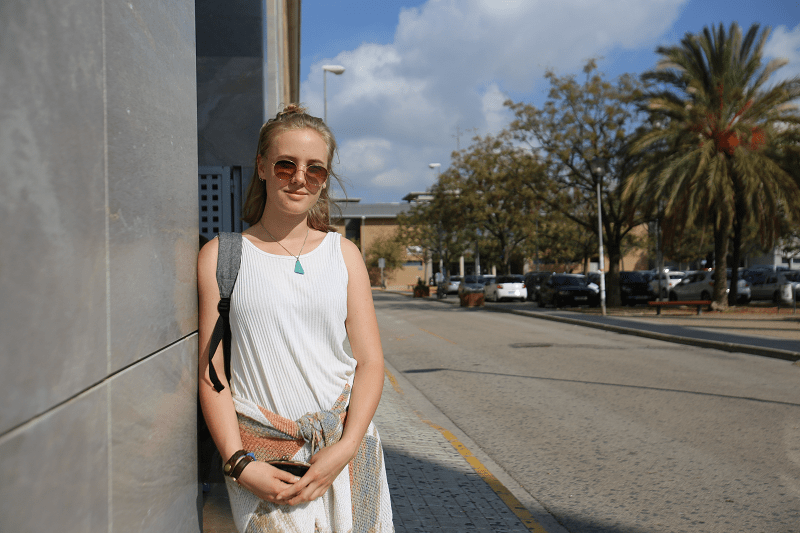 “I had been accepted into the Bachelor’s in Pharmacy in Norway, but then I thought that it would be nice to go somewhere sunny as well.”

Did you know Spanish before coming here?

I did know a little bit of Spanish from school, all the conjugations and so on, that is the kind of thing we learned. But I didn’t speak it fluently, and school was two years ago. So now I have to do a bit of repetition, because it has been awhile since I learned it. But it is definitely coming back! Having previous knowledge of the language is helping me a lot, it is definitely better than starting from scratch. It is definitely an advantage, having heard the language before and knowing how things are spelled. I definitely feel like I can use what I learned before.

Let’s talk about your studies a bit! What made you choose Pharmacy?

I spent a lot of time thinking about what I want to be when I grow up. I really envy those people with big dreams that have known they want to be a doctor or a fireman or whatever since they were five years old, but for me it wasn’t like that.

The subjects you study in Pharmacy interest me. It doesn’t necessarily mean that I love the idea of standing and selling medication in a pharmacy, but one of the things I liked about the subject is that you have a lot of other options as well, especially if you get a Master’s degree. Then you have quite a few options with the degree!

How did you discover University CEU Cardenal Herrera?

I knew that I was going to study Pharmacy this year, but I didn’t know where. I did apply to a lot of other places, too, but then things happened in my personal life and a lot of things changed, and at the end of July this year I was wondering, “Where am I going to go now?”

I was searching on the Internet and then CEU UCH popped up. They had space left, and I applied the next day, and everything went really fast from there!

So you had already made the decision that you wanted to study abroad?

I had been accepted into the Bachelor’s in Pharmacy in Norway, but then I thought that it would be nice to go somewhere sunny as well. The other school was all the way up in Northern Norway, Tromsø, and it is way too cold and dark there the whole year! And when you have been out of the country and had some adventures, you don’t really want to go back to what you know.

What made you choose our university? What expectations did you have coming here, and were those met?

The impression I got was that everybody is very professional. The only impression I had had, sitting home in Norway, was the website basically. And everything seemed very organized, and it is accepted in the European Union which is quite important for international students. I liked seeing that they are actually serious about attracting students.

When you go abroad you need to go with an open mind, and that is what I did. So far I have really liked my teachers, they are making the studying interesting. I like how they start already now during the first year to talk about what we are going to be doing when we become pharmacists. It makes the studies more relatable. And the teachers tell about the experiences they have had, the patients they have seen. I like working like this, it helps me to have something to connect the studies to.

What does the regular study week of a first-year Pharmacy student look like?

Usually we have lectures from early morning till two o’clock at the latest. So it is not too crazy, and some days we only have one hour of lectures. We have two different schedules, one for seminars and workshops, and then for practicals. So it is not the same thing every week, the schedule changes a little which is nice.

I often study in the library, because at home I often get distracted by everything else, and when I’m in the library I have to study. That is what works for me. It is like my office, and when I want to focus I go there.

What is your favourite thing about studying at CEU UCH?

In general, something that I like about studying at a university is that you set everything up yourself, and you can decide for yourself. I kind of consider school to be my job. I like that mentality.

As for the studies here, I find the subject of anatomy interesting. There is a lot to remember, but it explains everything that is going on in the human body. The first-year studies, especially this first semester, are very general. Starting from the second year we are going to specialize more according to the direction you are going with your studies. Right now we share a lot of subjects with Medicine and Nursing.

As a first-year student, what are you excited about regarding the following years?

What has been your favourite experience so far here?

It was really nice when we went sailing. During the Welcome Week we won this Instagram competition and got a free sailing trip! It was a nice group of people, and we went to eat afterwards. That was really nice. And just last weekend we decided to get together with the Pharmacy class, to get to know each other a little bit better. That is also something really nice, bonding. We are 20 international Pharmacy students, so it is a small but a tight group.

The first day here I was lost as usual. I saw this girl who was also asking for the way, and I went to greet her. I asked about her studies, and she said she studies Pharmacy. And she was also from Norway! We have a lot of classes together with Nursing students, and there are two more girls from Norway in Nursing, and one from Sweden. And we have more students from Morocco and France, a girl from Russia, a girl from Vietnam, a guy from Algeria, and one from Syria. We have a nice little mix!