What is the best thing that can happen to you during a day devoted to nutrition, other than learning something new? Probably that the talks will whet your appetite and you have the opportunity to satisfy your hunger at the end of the day. If the conference takes place by the sea and the person preparing the food is an international chef, success is guaranteed. How can we not do this again!

In fact, as a result of CEU Valencia’s first Asian Gastronomy Conference, which was dedicated to celebrating China, we are going put two more dates like this in the diary: one focused on Indian cuisine, and another one about the cuisine in Japan. However until those dates arrive, we are left with the best bits from this first conference, organised by CEU UCH’s Vice Chancellor for Internationalisation, in collaboration with Casa Asia. 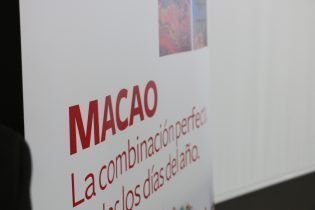 The conference gathered together gastronomy professionals, nutrition professionals, students and lovers of more exotic food in the Veles e Vents building. With the help of CEU UCH Professor Caridad Gimeno, we learned about the distribution of food according to the Asian nutritional pyramid and how, little by little, this has been modified with the introduction of products like cow’s milk, which until recently were not so readily used. There was also time to review the health benefits of some of the condiments that frequently appear in Asian cuisine: garlic, turmeric, ginger, soya…

In the first round, we wanted to take a look at the cuisine in Macao, a former Portuguese colony. For that, we relied on the presence of Professor Graça Pacheco, a specialist in the cuisine of this region and author of various volumes of recipes in which she has summarised a large part of her ancestors’ culinary knowledge. It’s a publication in which the author keeps some of the special culinary touches to herself; or as the cover of her family’s original notebook said: “This is not to share with everyone.”

Pacheco herself joined in with the preparation of one of the dishes, the dessert, which the participants were able to taste at the end of the conference. Along with ‘chintoi’ (flour balls, peanut oil and a covering of sesame seeds), the participants were able to watch two other typical Macao dishes being prepared during the cooking demonstration by chef Yon Wang. On the menu: ‘chilicote’ (small empanadas fried at low temperature with stuffing, white turnip, turmeric and vinegar) and ‘minchi’ (a culinary dish based on meat, chorizo, fried potato, shallots, soya and egg).

There we have it, an experience where the most exotic flavours are combined with science and the joy of sharing a splendid morning on the shores of the Mediterranean. An experience that left the participants satisfied in more than one sense and promises to continue into the future, so we can keep exploring other cultures and educating our students.