Home Postgraduate Programs The power of a logo: What makes a logo great?

Apple, McDonald’s, Nike. What probably came to your mind while reading these words was these brands’ logo: the apple, the M, the swoosh. A logo is what the consumer has in mind when the company is brought up. Thus, its potential is immense. So, let’s break down few things that make a great logo!

An image is worth a thousand words; and that is all the more true for a logo. Indeed, it encapsulates a whole brand and its products in a very simple illustration. And that’s a really hard thing to do!

For instance, Nike’s swoosh may seem awfully simple, but it almost unconsciously connotes dynamism, motion, speed… That’s why even simple-looking logos can take up to 30 working hours for a graphic designer to manage to materialise values, concepts, products and even a vision!

The use of colours

What a better way to symbolize values than colours? Colours have meaning and express different emotions, personality traits or attitudes. Besides, a study shows that colour increases brand recognition by up to 80 percent. And indeed, only few logos are in black and white and for one simple reason: a logo that catches the eye is often key to stand out from competitors!

Here you can see some colours’ meanings and how they were used in logo making: 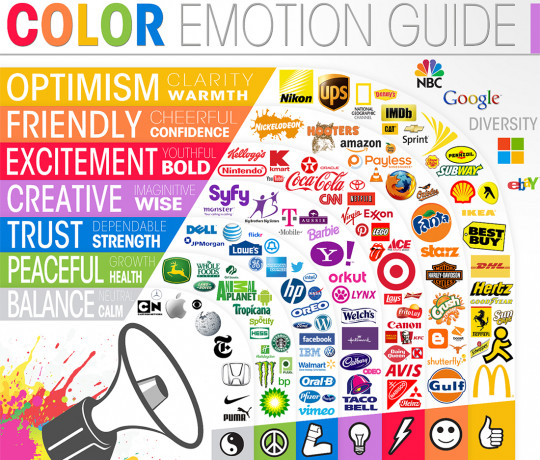 Interbrand’s list of the top 100 brands of the world shows that 93% of the logos are simple enough to be viewable in small sizes.

These past few decades, logos have been becoming less and less complex. This logo evolution towards more simplicity is for example striking with the Google logo which gave up on its 3D appearance.

One of the main reasons for this change is the growing need for a logo to be viewable in small size. This requirement also triggered a change in font from serif font going sans serif, the latter being more easily legible in small size.

Talking of simplicity and minimalism, in 2015, Turkish graphic designer Bilal Koç proved that iconic logos, even with only their raw outlines, were still easily identifiable.

It’s because these logos are unique. Uniqueness is central in logo making, mostly because the brand could be mixed up with another company’s logo. Some people often mistake the Chanel logo for the Gucci one and vice versa. It’s in the own interest of the brands to have an original logo.

Of course, lawsuits for plagiarism can happen and that’s another (good) reason for keeping a logo as unique as possible!

Which is better: Logotypes or logomarks?

An established brand will have less trouble having a logomark design (mark or symbol without the business name). For example, the brand name Shell was removed from the logo as now it’s only the iconic yellow and red shell. But when the brand is not famous enough, it’s better to get the name on the logo so the consumer can associate them.

In case of a logotype (the contrary: the business name alone), having a unique font is important and a way to make the logo stand out. For example, the Disney or Coca-Cola fonts are very specific and easily identifiable so that even when they are used to write another name, the viewer still recognizes the brand’s identity.

So, there are many aspects to consider when designing a logo! Do you feel inspired to create your own now? This is just one of the possibilities when you study Graphic Design or Communication at CEU Valencia!

“Design knows no borders and neither does our Master’s Degree or our students.”

“We speak the language that clients want to hear from designers.”

Smartphones and pottery? No, it’s not impossible…it’s Design!