Home Law and New Technologies What can AI do for law – and vice versa?

CEU graduate Patricia Mendilibar has such an interesting and unique profile that we simply had to interview her – especially now, because the fast-changing, dynamic environment that we all thought was the future is, in fact, already with us. She certainly has a lot to say about change, about moving forward, and about a profession which has major challenges that it must face. Patricia is a CEU graduate in both Journalism and Law, she is an associate at Andersen, and she is also studying for a doctorate, researching law and artificial intelligence.

Patricia, do you think that today’s new technologies can transform lawyers’ day-to-day work?

I think that we’re living in similar times to the Industrial Revolution, in which greater physical capacity increased productivity. Today, we need software that can better administer all the data that lawyers need – things which we can’t just have in our heads all the time. So, I think that artificial intelligence can be a great help in many areas.

It is true that there are some problem areas, such as natural image processing. Machines are capable of talking like humans, but when we talk, we also use devices such as irony and sarcasm. So, we need the algorithms to understand this way of communicating, including with regard to the law. In this area, there’s still a lot to do.

However, there are already areas of our work in which artificial intelligence is being used. Lawyers spend a lot of time searching for legal texts. Search engines which use artificial intelligence can really help us in this respect. The role of the lawyer will continue to be important because he or she will have to guide the machine depending on what the data are needed for. So, we’ll have a major role to play in the use of AI.

Another weight it can take off our shoulders is the work involved in legal audits and document reviews. Machines are quicker, don’t get tired, and can review a huge number of documents in a short time, and that frees up the lawyers to do other things.

These are just a few examples to give to people who are sceptical about the use of artificial intelligence in law – its usefulness is real. In short, rather than transforming our work, I think new technologies can help us in particular ways: they can improve our quality of life, make things move more quickly, reduce bureaucracy, improve services, etc.

Do you think the role of the lawyer as we know it is under threat?

“As lawyers, we have to define which tasks we need the machines for and then to set the objectives for them. So, currently, AI cannot replace us”

For example, when Amazon used AI for selection processes, women were not selected. The explanation for this is that the algorithm used the hiring records from the previous few years and only men had been hired. Another case is Google Photos, which confused photos of black people with chimpanzees. So, AI has to be under the control of someone who can see these deviations and make the right modifications to ensure optimal and, indeed, ethical results.

What can AI do for the legal world?

AI will improve it. We’re going to be able to leave behind old complaints, such as the justice system being too slow, and that the people who study law have no time to do anything else, etc. If AI can take away 50% of our workload – tasks which also require the least skill to do – then that means we can devote 100% of our time to more valuable tasks, enabling us to provide a better service.

Then, there are new types of role to think about. Maybe we need to see people with different profiles working in lawyers’ offices, such as engineers, mathematicians, programmers, etc.

We also need to ensure that AI is accessible to all and to democratize the technology. If it’s only within reach of the large firms, inequality will result. The idea is that we should all benefit from a better justice system, regardless of our ability to pay.

We could go on and on about how AI can change the legal world. For now, we should see it as something that can provide support to what we do.

And what can law do for AI?

In the future we will have to deal with AI entities, and so, law will have to adapt. The classic categories will need to be reconfigured. Let’s remember that the Spanish Civil Code was drawn up in the nineteenth century. AI entities were inconceivable at that time and so no legal status was allotted to them. This is a debate that we’ll have to have: what legal status should we give to AI entities? Are they like animals? Humans? Do they have freedom of expression?

“Law will have a lot to say about AI, so there’s plenty of work ahead of us”

And finally, do you think that data is the oil of the 21st century?

Yes, but we should remember that oil is only useful once it’s been extracted, refined and distributed. It’s the same with data: there’s a lot out there, but the key is organizing the data.

Over the last few years, the European Union has made more progress with respect to data than it has with AI. In fact, it has published a new regulation. The EU’s position can largely be characterized as permitting the free circulation of data and yet also limiting their unjustified use.

There are important issues here regarding the consent we give for the use of our data – something that we do all the time, sometimes without realizing – and also regarding how our data are going to be used, who’s going to use them, etc.

The future will be full of exciting changes, and we’ll have to keep a close eye on what happens. 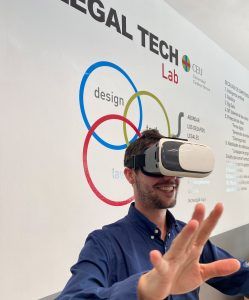 The CEU Cardenal Herrera University’s Legal Tech Lab has been set up to study the relationship between law and new technologies.

Knowing how to find synergies between technological advances and day-to-day legal work is a key skill for a lawyer to have.