This week was celebrated the 32nd edition of the Rey Jaime I Prizes in the Royal Convent of Santo Domingo in Valencia, partly by videoconference to mantain among the jurors the 20 Nobel Laureates. Unfortunatelly, Dr. Mario Molina died suddently on October the 7th. But the rest of the jurors, were there to award 6 Spanish people:

In this ocasion, the unusual Proclamation Ceremony, was held in an almost empty Palau de la Generalitat. Where Prof. Santiago Grisolía was remembering that Dr. Molina was in the Jury of Protection of the Science for 22 years and the interaction with many Spanish researchers in the field of Climatic Change. 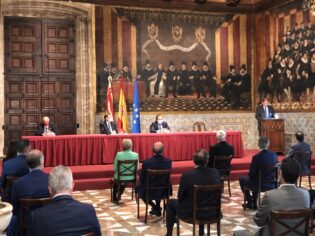 Proclamation Ceremony with the President of the Valencian Government, Dr. Vicente Boluda and Prof. Santiago Grisolía in the presideng table

The quality of the candidates was not affected by the pandemic

One of the conclusions of the jurors was that this year the candidates were as outstanding as the year before, concluding that the exceptional situation was not affecting the selection of brilliant winners.

Dr. Miguel Beato, was the founder of the Centre for Genomic Regulation in Barcelona, one of the most relevant European centres on genomics with a wide number of researchers. Dr. Beato discovered many years ago the mechanims of action of the steroids and the fact they have their receptors in the cytoplasm of the target cells. But the prizes was awarded for his more recent work in Spain, where he found that, other than beeing produced by the mitochondria, ATP is also synthetized in the cellular nucleus.

Dr. Lechuga and Dr. Beato will gave their speach about their experimental works when they will come to Valencia to receive the Medal from Felipe VI, King of Spain. Probably the videoconferences will be open to everyone.

Santiago Grisolía wants that the youth meet scientist and learn to love Science, because is the only tool against the pandemic and poverty.