Home Our students Larisa from Sweden: a story of fire and ice

Ice begins to melt at zero degrees at sea level. In general, the rate that the ice melts depends on how high the temperature is at which it is exposed. That’s physics. However it’s not a matter of science when calculating the heat that a certain attitude in life gives off. And yet, there are also things that melt in the face of determination. Solid obstacles that melt like water when in the presence of effort and confidence. 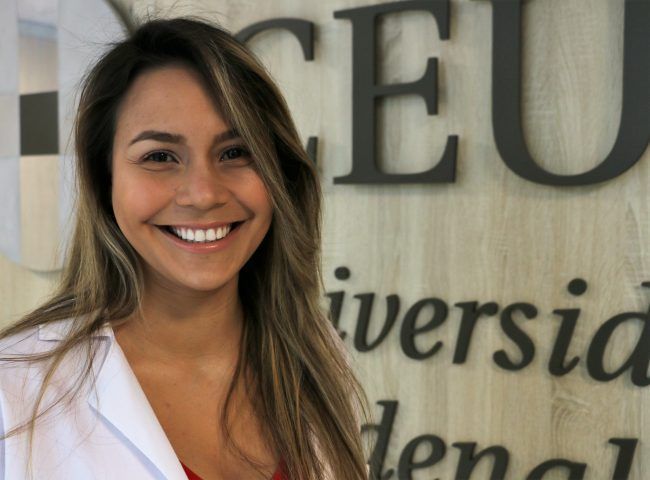 “I believe in what I do” is a phrase which gives off energy, no matter whether it is said next to the beach or on top of the highest mountain. And that gives off even more energy when it comes from someone from Sweden. It’s Larisa, a first-year student of Medicine, explaining what it was like getting here.

“It is not easy to be accepted onto this degree. The fact that I have achieved it shows me that I can achieve what I set out to do”. What Larissa wants the most is far away from here and in any part of the world where she is needed as a professional for a humanitarian mission: “When I finish my training in Valencia, I will return to Sweden to do Military Service – I want to be an army doctor and work in conflict zones”.

“I have a clear idea of where I will be: I have not come here to end up sitting in an office”

She decided on CEU UCH after spending almost a year in the Swedish army, where she completed four months of training (“I had to pass very hard physical tests to be able to get in“, she recalls) and another five months of medical training to get into higher education. And before all that, she studied at Rudbeckianska School in Västerås, the oldest in Sweden and the first to accept women among its students.

Larisa speaks Swedish, English, and Spanish, and is learning Italian. The possibility of studying the degree in English was one reason for choosing us, but not the only one: “CEU Valencia seemed the best option for what I was looking for, not only due to being able to study in English, but also due to being able to interact with students from so many different countries and getting to know more about the Spanish culture, something that I believe to be essential“.

She says that with her classmates from other countries she has formed “a large family“, and she is glad to be living an experience that is confirming that she is a “responsible and independent person“.

She also considers this environment of global education as a something very positive for her professional future: “I want to have the broadest training possible. I’m going to have to care for people from cultures very different to mine. In this profession, the more prepared you are and the broader your perspective, the better for the patient,” she says.

Discipline and a work ethic, values in which she has been educated, inspire the last sentence she says with a big smile full of confidence and energy: “I know I can do what I want“. And then, suddenly, it seems Sweden is not going to be so cold after all.

Thank you and good luck, Larisa!

Working while studying Medicine: a superhuman feat or a matter of time management?