Home Our students “Why would I not live in Spain?!” – Training as a nurse...

Dancers are known for their passion and commitment. When they want something they go for it, no matter how much physical effort it entails: Once dance enters their hearts, nothing can ever take it away from them.

Passionate, motivated and committed about her new academic adventure, our student Xelha is now determined to become a nurse. Here’s what she told us about her journey. From California to Spain to pursue her dream, becoming a nurse. A nurse with the heart of a professional dancer. 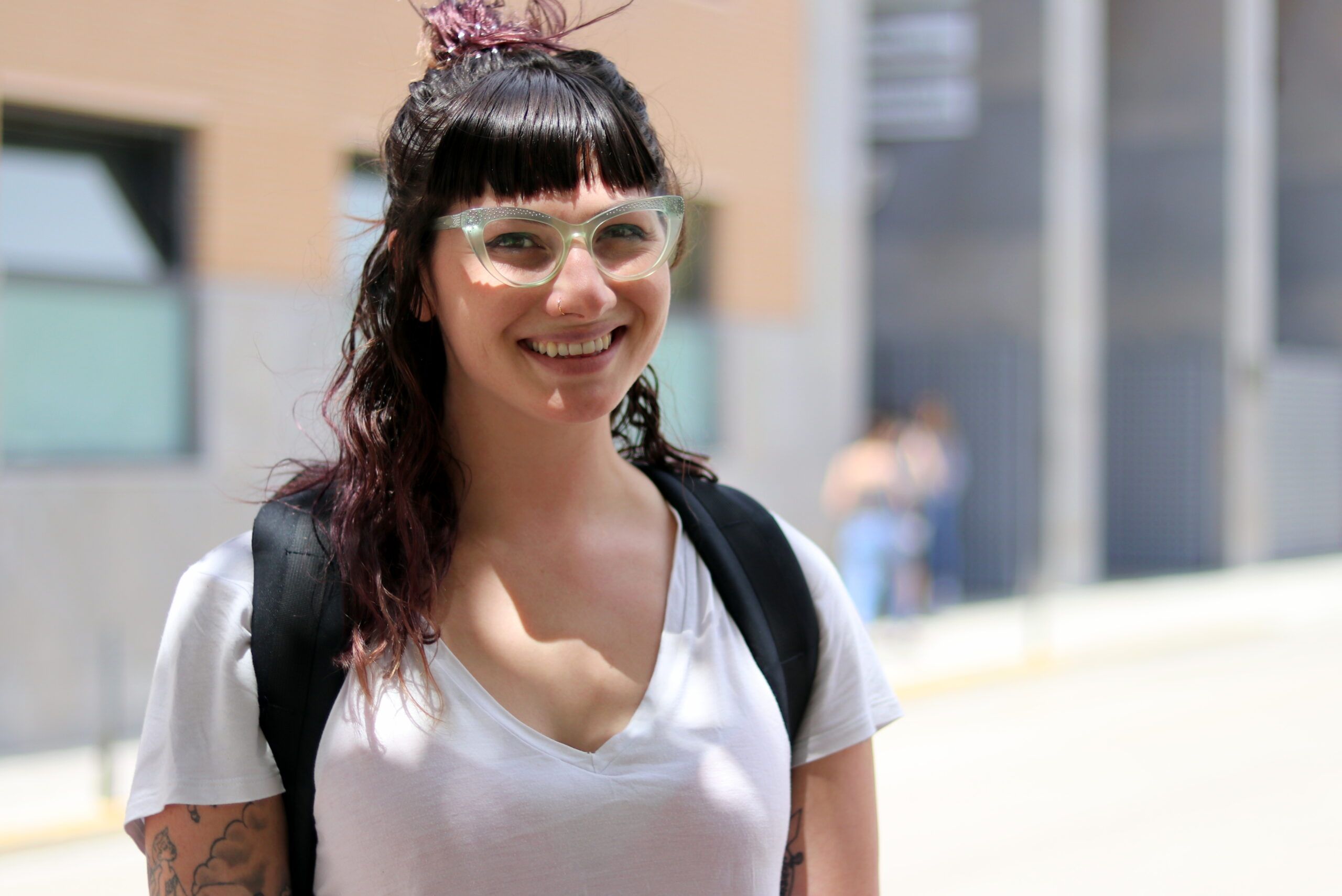 So what attracted you to study Nursing in the first place?

I was an assistant nurse in Oregon and applying to nursing schools out there, but it’s just so competitive and really really hard to get in. I didn’t want to keep applying and keep getting rejected for another two years, when there’s a school in Spain where I could get accepted to right now, live in Spain for four years and be a nurse. Why would I not live in Spain?!

Was there something you did previously which is relates to nursing?

I have a bachelor’s degree in Dance, and my original plan was to go into physiotherapy and do movement therapy. Though physiotherapy school is also super-competitive, so I became a nursing assistant to get medical hours to look good for physiotherapy school, but then when I started working in the hospital I realised I loved nursing so much, so I just kind of changed my entire course.

Just living in Spain attracted me but obviously this is going to make me bilingual, which makes you more employable.

And how did you end up here with us in Valencia?

I’d never been to Valencia itself before. This is going to sound really bad, but I’d never really even heard of Valencia, even though it’s the third largest city in Spain; it just wasn’t on my radar. But I came here on holiday with my cousin about 5 years ago and had this feeling on a train from Granada to Barcelona – that feeling when you’re coming home from a long holiday and you’re so excited to sleep in your own bed and be in your own house with your own stuff – I had that sensation, even though I was going to Barcelona and hadn’t even booked a hostel for the night. I had that ‘Oh yes, I’m going home feeling’. So I took it as a sign, that one day the universe is telling me I’m supposed to live in Spain. So when I was looking for nursing schools internationally, and there was one in Spain, I thought “that’s the one I’m supposed to go to”. And I applied to CEU Valencia and I got in. I’m really really glad I did.

What were your first impressions when you got here?

I got here the week before my roommate did and I didn’t know her beforehand but we had at least talked. I didn’t know a single person, so it was really exciting but also super-scary to navigate my new home by myself. My Spanish was not great – I had done a little bit of Spanish before, but it was when I was in high school, which was 15 years ago!

But it was still really exciting – you know, the streets in El Carmen feel very European, they’re all tiny little alleyways with the terraces and the laundry and so it was so exciting just to walk around and be like “This is like a fairytale, and I live here!”

And now you’re here, has anything surprised you about nursing here in comparison to the US?

Well, it’s definitely different, I mean obviously I wasn’t a nurse in the US, but I was working in the hospitals as a nursing assistant, and I’ve seen a lot of things. There’s some stuff, like going to the doctor’s here, I’ve noticed is different, because I did so many intake forms for patients in the US, I know the intake process – I could do it with my eyes closed. Being a patient here in a doctor’s office is so different and I thought it was so strange! 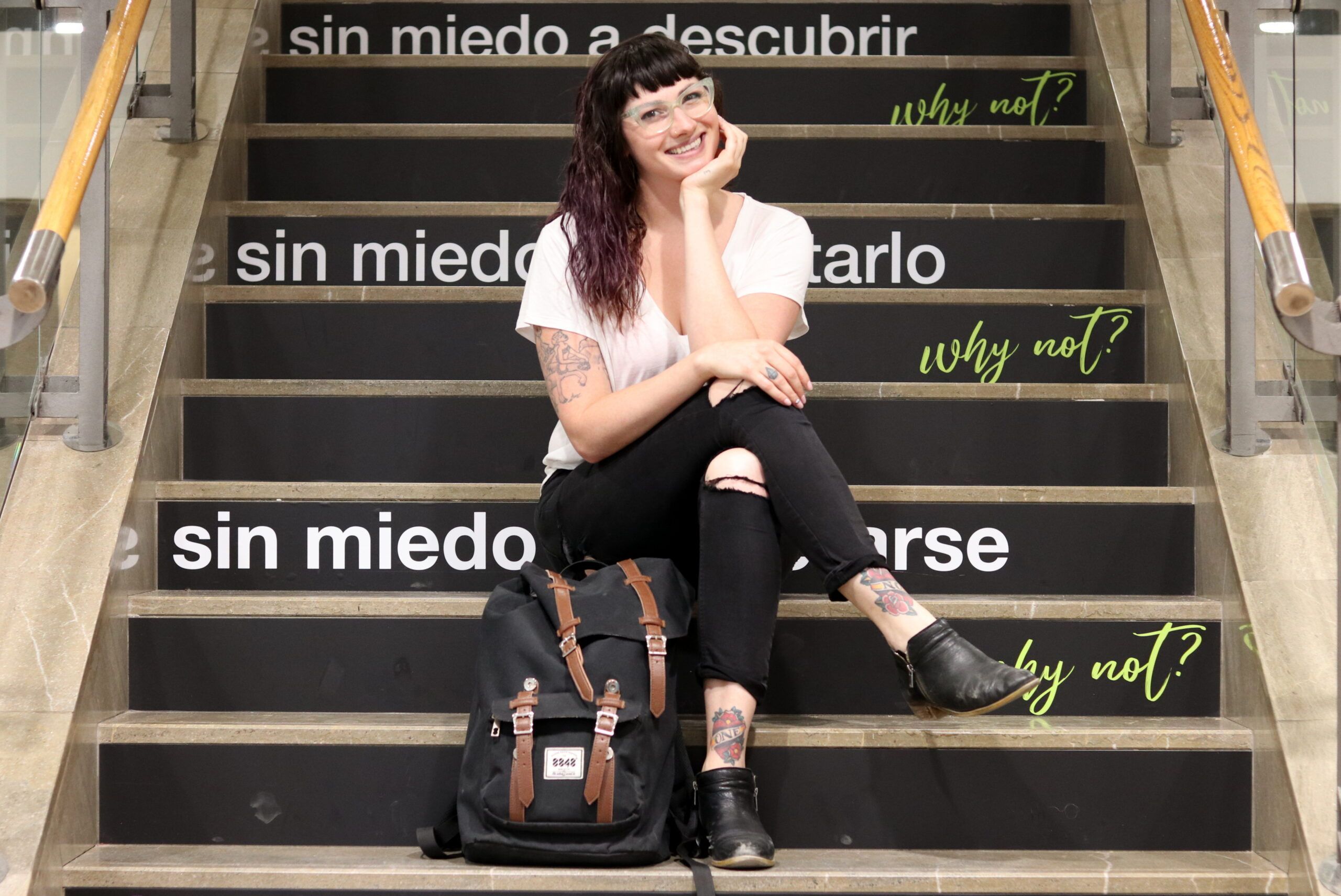 So looking into the future – have you got any idea of where you’d like it to take you?

I was working in geriatrics, which I really really liked and then I also worked in post-op, which I liked alright; it’s very different. I would totally work in geriatrics again and I would love to do wound care. My ideal job is to do travel nursing because it’s my two favourite things – travelling and helping people.

At least in the US it works like if there is a hospital which is short-staffed, you do say six months there and then you’ll do six months at the next hospital. So you just don’t really have your hospital, you just kind of rotate between either hospital companies or healthcare companies, it depends. If there is a catastrophe or a relief fund, you need all hands on deck, so you’d probably go there.

Internationally do you think?

I’m not sure… I have three years to figure it out though!

And next year you’ll start taking classes in Spanish – how are you getting on with it so far?

My Spanish has definitely improved. I’m very nervous to have class in Spanish because having a conversation in Spanish and having an entire class in Spanish is super-different. But, I also know that my teachers will know who the Pathway to Nursing students are, and we get dictionaries with our tests, so I’m hoping they’ll be pretty understanding. But I’m really excited because it’s obviously going to force me to speak much better Spanish as I’ll have to, I have no other choice. I’m really excited for that… nervous, but excited.

Just living in Spain attracted me but obviously this is going to make me bilingual, which makes you more employable. It’s a super-useful skill to have to be able to speak more than one language. Especially as Americans are criticised so much for only speaking English. I think it’s ridiculous that I had four years of Spanish and I still don’t know how to say some things. I’m excited, for sure about that.

When I worked in the hospital back home we had a patient who had Alzheimer’s. During the day when she was there she kind of spoke English, but when she would start sundowning she would only speak Spanish. Like I said my Spanish is not perfect, but I could at least understand her and what she wanted. So it’s a useful skill to be able to speak another language, but specifically Spanish because so many countries speak it.

You said that originally you studied Dance – are you still involved in dancing at all?

In terms of a career, no, I still like to take classes and I brought my pointe shoes here for ballet, just in case I have time to take class sometime. It’s still something that I love to do, but for a career, no. It’s extremely hard to get into – at this point I’m considered retirement age! So I’m actually retired from that career, I’m starting my second career!

And finally, we always ask our students to tell us a bit about where they are from. What can you tell us about California and the US?

Sell you The West Coast? The West Coast is the best coast, obviously! Honestly I think California is the best state because it has everything. It has coastline, both in the north where it’s rockier and colder, think like The Goonies, even though that was filmed in Astoria, Oregon. It’s still rocky and a colder coastline. In southern California you have the hot, white sand beaches, if you go inland you have mountains covered in snow, you have the desert, you have everything in California. So you don’t even need to visit the whole US, just go to California. Everyone always makes fun of us because we don’t have seasons, but they just haven’t gone to the right parts!

Thank you for chatting with us Xelha, best of luck with everything!

A nurse in the USA: the importance of speaking Spanish

Making the world a better place

Much more than just a job: Why becoming a Nurse is my vocation