It’s a simple sport. You only have to score a basket; and to win, do it more times than your opponent. It’s basketball. Following a dream is also something simple. Go for it. Think about the details later, of course, the story of every effort and all the time spent. The basketball statistics are an exhaustive insight into something, which seems as simple as running up and down a court with a ball and scoring baskets…or is it.

It´s called a triple-double when a player scores ten points in three of the five categories counted in the statistic: points, rebounds, assists, steals and blocks. It’s not as easy as it sounds and French student, Etienne, knows it. Perhaps you are less aware how well the figure triple-double relates to the path a student follows whilst studying Physiotherapy at CEU Valencia. The first 10 is for the satisfaction of the training received, another 10 for the possibility of combining it with his passion for basketball and finally the highest score goes to university life on campus. 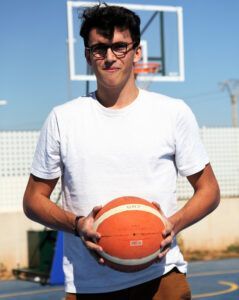 After seeing you score a basket, we can certainly say that you have not learned to play since arriving at CEU Valencia…

I’ve been playing basketball since I was 10. For about a year now, I have been playing in one of the teams at Valencia Basket. Since I was little, I have always been fixated on watching the physios work with the players whether it is in an amateur environment or at a more professional level. Before starting my studies, I did a couple of internships at some clinics in France. To be able to unite basketball and physiotherapy is a professional dream.

Why Spain? Why CEU Valencia?

I decided to study in Spain for various reasons. Firstly, for me it was the only way to play sport at a high level and continue training and studying for something, which I’m interested in. That’s exactly what I found in Valencia with Valencia Basket Club. CEU was the best option because it came with the best recommendations: My sister was already studying here to become a vet and from what she told me I knew that it would be a great place to train in the best conditions for my future job.

You have taken a break from the team this year. How are you finding the change now you are in second year and focusing more on your studies and university life?

I am enjoying the diversity that there is here more than ever. There are so many types of degrees (vet med, physiotherapy, dentistry, pharmacy…) which means there are lots of different kinds of people. I always like meeting new people, doing sport at university and playing music. I am also exploring the region of Valencia: there´s so much to see and above all the weather is great.

Coming from someone who has had first-hand experience in sports physiotherapy, we would like to know your opinion on the placements and the classes.

From my point of view, the content of both the lectures and the placements is impeccable. You learn a lot in a very intuitive way; therefore, I can only really say positive things. Regarding the professors, the truth is that it always depends on how much energy and enthusiasm they each give during the class, just like in any other situation.

What are the benefits of playing basketball? 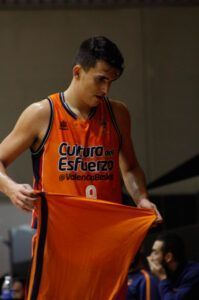 The truth is that it has always provided me with an important balance in my life. As I’ve said, Valencia has allowed me to have physiotherapy and basketball in the same place which is something that I really benefited from this in my first year at CEU.

During second year, I am still playing for the CEU team and staying connected to the sport. The new facilities are also just beside my School and the truth is I’ve had a great time here with the whole team.

As well as basketball, and when you’re not in class, what other university activities do you take part in?

This year I am learning how to play the drums. Every week, if we can, I get together with some friends from my physio class thanks to Campus Life. The hours we spend rehearsing are great fun…

Thanks a lot Etienne!

The new values of Physiotherapy!