Home Work Experience and Employment Rosa (student of Political Science and Journalism) tells us about the experiences...

Rosa Estevan, a student of the third year of Political Science and Journalism, tells us about the experiences she has gained during her internship at the Legislative Assembly of the Region of Umbria (Italy): 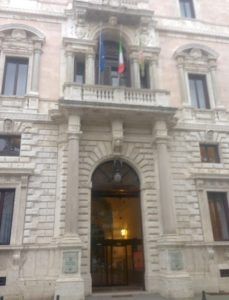 “When I decided to learn Italian during a summer holiday which I spent in Reggio di Calabria (a town in the Southern part of Italy) two years ago, I would not have thought that the Italian I learned there would be useful for me to get such a great opportunity which I am experiencing now.

It all began at the end of last October when my professor Susana Sanz announced in class that the University had signed an agreement with the Legislative Assembly of Umbria. Much to my surprise they were about to offer internship placements in Italian.

I realized that the decision to embark on this adventure, which I had been thinking about for hours, would make me miss two entire months of classes, even though it might be a great opportunity to get to know a public institution of a different country. However, in the end I decided to apply for the internship and some weeks later I received a mail in which I was informed that I had been selected. After saying goodbye to my friends and my family, I could finally take a flight to a destination where a new chapter was waiting for me. On the first of March I was already in Perugia to start an adventure which I had been looking forward to for months. 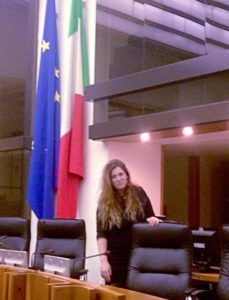 On my first day at the Legislative Assembly, the welcome could not have been warmer and my colleagues for the coming two months all welcomed me with open arms. The tutor of my internship, Dr. Rosalba Iannucci, accompanied me to my new office – an inviting place – ready to start my new job.

The task I was given in the first days was to get to know the internal structure and organisation of the assembly thoroughly, for example the regional legislation and the main characteristics of the region of Umbria. Furthermore, I was explained the tasks I was going to complete in the following two months: analysing the deliberations which are dictated by the Regional Committee for the Communications (the authority of the assembly which works in the administration as a mediator for the solution of conflicts). The task of analysing a deliberation consists of three parts: describing the object of the controversy, displaying the verdict’s motivation of the deliberation and developing a suitable decision.

I must admit that, in the first days, the task was quite complicated for me as the text of the resolutions is written in a very formal Italian. But as soon as I had analysed the first deliberations, I got familiar with the language and the work.

Apart from the tasks I already mentioned, I have also had the opportunity to assist the meetings of the Regional Council, in which the members of different parliamentary groups (a total of 8 groups) debate and approve proposals of topics such as the quality of the legislation, the valuation of the implemented policies and the control about the action of the laws in relation with the other regional legislative assemblies and parliamentary institutions. Moreover, I have also taken part in the meetings of the Third Committee of the Assembly, which controls the matters of Health and Social Services.

For all those reasons, it has been an unforgettable experience and I am very thankful to professor Susana Sanz, the University CEU Cardenal Herrera and to my tutor Rosalba Iannucci for giving me the opportunity to experience the political, legislative and administrative structure of the Italian region of Umbria and to get to know the differences between the Italian regionalism and the Spanish autonomous system.

To say it with the words of Malcom X:

“the tomorrow belongs to those who prepare for it today”

Patricia’s story: from our university to the Spanish Embassy in Dublin!