Home CEU Band …And the band played on! 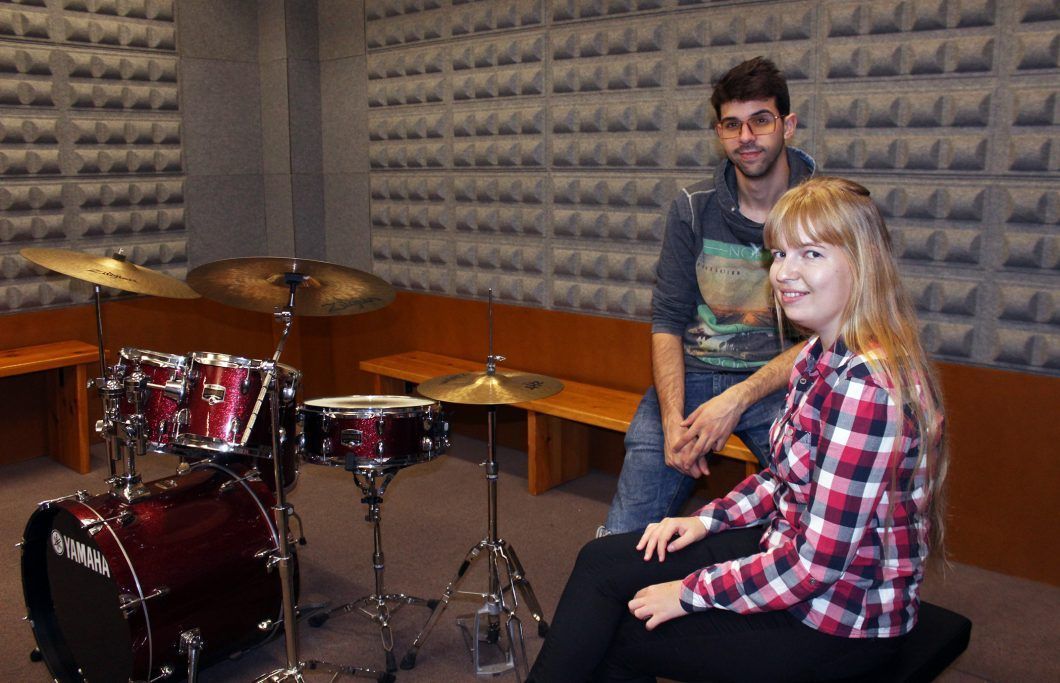 They have two interests in common: creativity in visual and auditory media and music. But that’s where the similarities end.

She’s from Russia, she’s just graduated in Audiovisual Communication and she plays the guitar. He’s Spanish, a second-year undergraduate on the same degree and he plays the tenor saxophone.

Anastasiya Shvandyreva and Jesús Ros are both members of CEU Band, one of a range of initiatives the University offers to students to express themselves. The group sprang up last year and it’s becoming more and more popular amongst CEU students from all degrees and countries.

Why did you join CEU Band?

Anastasiya: I felt like doing something different, something really enjoyable. Playing music with other people seemed like a good way to do that, instead of just playing at home on my own. I thought it’d be good to play songs and different pieces together, because it’s much more fun than playing on your own, at least for me. More than anything else, I was hoping to find a good atmosphere and a group in which different people could come together, play different instruments and create some really interesting, new and distinctive music.

Jesús: I like music and I love playing music. I’d more or less stopped playing the saxophone and I thought that this would be the perfect way to get a rhythm going playing again. And the idea of meeting up with people I didn’t know at all to play music sounded fun.

‘YOU MEET A LOT OF PEOPLE WITH THE SAME INTERESTS AS YOU AND YOU HAVE A GREAT TIME. THAT HELPS YOU NOT TO GET SO STRESSED OUT WITH EXAMS.’

You’re not professional musicians. But you have a bit of musical training, don’t you, Jesús?

Jesús: Yeah. When I was younger, I went to music theory classes at a school in Alfara del Patriarca and I started learning to play the piano. I liked it! But it’s quite a solitary instrument, so I changed to the saxophone. I’ve played in my town’s band and sometimes a few other things.
Anastasiya: I haven’t had any formal musical training, but I’ve always liked music: it’s a real passion for me. I’ve been playing the guitar (classical, acoustic and electric) for ten years, because it’s an instrument that has always fascinated me.

One of the best things about CEU Band is that everyone plays together, even though there’s a lot of variation in skill levels. And you’re from different degrees and countries too. What do you take away from this experience?

Anastasiya: It’s easier to meet and get to know people through their musical tastes and interests. The fact that there are people from different degrees and countries is one of the great things about CEU Band. when you speak to the other members, you find out about the culture of other countries, the university experience of those on other degrees, and strange and interesting things which you didn’t know before, and you can also meet new people and really feel a part of the University.

Jesús: That’s right. It’s a place where you meet other people with the same interest while also having a great time. It really is worth joining. It’s great to watch the videos of the rehearsals too. Another thing is that playing really helps you to de-stress. There’s a very relaxed atmosphere and you come out in a good mood. I don’t know if it helps you study better, but it definitely helps you not to get so stressed out with exams.

And do you think you’re developing as musicians?

Anastasiya: Yes. Just like Jesús, I like being a part of this project because I have a great time doing what I love and I also think that music is a great way of relaxing and of lifting your mood. And with regard to your question, I’m also learning new songs and new tricks for playing the guitar, and it’s a great thing that we can share knowledge with each other.

Do you all jam together or do you have fixed line-ups for anything?

Jesús: The magic comes from the fact that each person brings in the instrument they play. And then we can just put them together. For example, you don’t often see my instrument, the tenor sax, in pop or rock bands. But it’s fun to experiment and find the right feel that can really enhance whatever song we’re working on. Some people have brought recorders, ukuleles and we almost had a clarinet-player join. There are no fixed line-ups, we don’t say “we need these instruments” and a bit of improvisation and jams happen between some of the songs.

‘IT’S FUN TO EXPERIMENT AND FIND THE RIGHT FEEL TO ENHANCE A SONG. SOME PEOPLE HAVE BROUGHT RECORDERS, UKULELES, AND WE ALMOST HAD A CLARINET-PLAYER JOIN’

It sounds fun. As your studies are both in Audiovisual Communication, do you think your experience in CEU Band can help you in your future career in the media?
Jesús: I look at my participation in CEU Band from the point of view of personal rather than professional growth. It helps me to be more flexible, to know how to work in a team and to meet a wide range of people.

Anastasiya: Well, we have to remember that music has always been a key part of creativity in sonic and visual media. Knowing more about music could help me in my future career, and it’s definitely true that by being part of CEU Band I’ve been able to improve my skills and learn more about music and sound.

How does CEU Band work?

CEU Band members get together on Thursdays at two different times, from 10 am to 2 pm and from 4 pm and 8 pm. Students come as and when their lecture timetables allow to the CEU Música recording studio, which is located in CEU multimedia production building, CPAB.

At CEU Band, students can disconnect from their studies for a while by playing cover versions of songs or even by creating original pieces. , the coordinator of CEU Band, told us that “students basically get together and jam. The most popular genres are generally pop, rock, blues and reggae, but there are some rap songs too. Sometimes the instruments that get played are the typical ones you’d expect, but at other times they’re not.”

‘IT’S FANTASTIC TO BE ABLE TO REALLY SHARE YOUR PASSION FOR MUSIC, REGARDLESS OF THE TRAINING YOU HAVE OR WHERE YOU’RE FROM’

Some students bring their own students, although the studio itself has a drum kit, piano, guitar amplifier, bass amplifier, a set of speakers connected to microphone to sing with and some acoustic guitars, amongst other things. “The main objective,” Cruz says, “is to provide an opportunity for students to express themselves musically and have fun while playing. There’s a place even for those whose playing isn’t that advanced, as they can come and play a simpler part of a song. It’s fantastic to be able to really share your passion for music, regardless of the training you have or where you’re from. And that shows that music really is a universal language.”